Having been on a day off Monday, I opted to visit the zoo, for only the second time this year. I seem to be about on par for my visit frequency. I was there mainly to see the new “Land of the Lemurs” 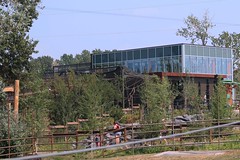 but I did my usual wander about the place. I usually show up at the zoo around 3pmish, getting there when the crowds are starting to leave, but early enough to allow myself a good two hours of zooing around, longer if I’m willing to just stick to the outside, as the buildings start to close at 5pm. Today I went early, showing up after lunch. Just wanted to get going. Motored over to the “Land of the Lemurs” right away, and not to my surprise, found a modest sized lineup. Being a nice Monday, and the enclosure not being that big, and the Lemurs being there right with you, you can see why the Calgary Zoo limits the number of people that can go in at the same time. 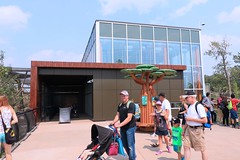 The building looks nice, but the lemurs were all outside, so I’d have to tell you about that another day. I decided to return later, hoping the line would be down as the mommies and daddies had to leave to get their evening cooking started.

Upon returning at 3:30pm, I found the line indeed was down to a few people. Good thing, as they make you wait for a while as each group exits in set 10min? intervals. At least you can see the lemurs in the distance sometimes while waiting – you are up high looking down into the enclosure, so if they happen to wander by the area you can see, you get a view. Upon gaining entry, you wander across a platform with some 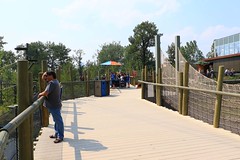 play bridges with a great above the ground view of the lemur grounds. If you have a decent telephoto, you should be able to get some pictures if the Lemurs are out and about. But the fun hasn’t started yet. Now you get to line up a second time, this line is more of a same packet, send to next node type of wait, so if you were waiting for an hour it isn’t like you have another hour here.
This time, you get to go inside the enclosure with the Lemurs. Interesting for sure, as the Lemurs have the option of coming and going from you as they see fit and evidently may like a sip of your drink, or your baby carriage as a lounging spot. 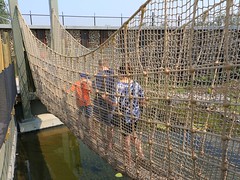 So, no food, drink, carts of any kind. Even sitting is discouraged as the Lemurs may decide to come and sit on you in turn.


Personally, I would find this cool, but I can see some people being completely freaked out about this. I’m somewhat surprised the zoo has decided to go with this “managed cage entry” approach. It’s pretty labor intensive – two people manning the initial lineup, and a third to direct traffic if it is busy. Then you have a person manning the enclosure entrance, mostly for if someone wants out early as the remaining two staff are tour guides which divide the people in the enclosure into two groups to keep things somewhat organized in the enclosure. Five to six people for one exhibit – we’ll see how long that lasts. 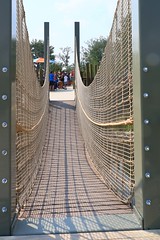 That being said, being right among the lemurs is pretty cool. I was lucky to have the lemurs wandering about, some right in with us without a concern for our being there. Watching the humans react to this is as entertaining as watching the lemurs.

The day was smoky, being another day of smoke and as a bonus, ash from BC fires. Glad that’s all I have to deal with on that front. But it made for interesting pictures – like adding a warming filter to pretty much everything as the sun was much redder than normal. I ended up applying cooling (digital) filters to some photos, as the skin tones were just a little too orange for my tastes. I didn’t mess with any flower pictures though – every time I tried one of those it just didn’t look right. For the lemurs, it is a bit frustrating being toured through the enclosure as I’d have liked have moved about a bit more, and just stayed a bit longer to catch them at the right place and lighting. Oh well, wait for a crappy weather day for that. 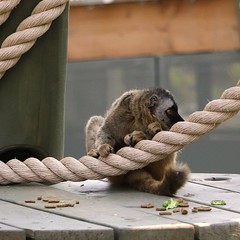 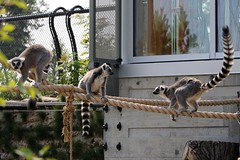 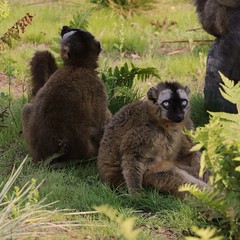 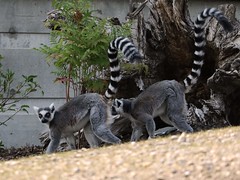 Just another blog to share some thoughts with the world.
View all posts by ralph →
This entry was posted in pictures, rant, WhoKnows?. Bookmark the permalink.