You probably didn’t know who Ingvar Kamprad was until the news hit today that he, the founder of IKEA, had passed away. It got me thinking about how big an influence he had, especially here in Canada. In my generation, pretty much everyone had some IKEA furniture in their place at some point. IKEA fits the Canadian mindset quite well – build it good enough for cheap. IKEA fit in with Canadian culture another way: at a time when a lot furniture stores were known for being full of pushy sales people, IKEA just left you alone to wander through a cavernous space, but if you had a question, there were staff around to help you. That suited me, thus after a while I just defaulted to heading to IKEA when I needed another piece of furniture. A lot of other people seemed to feel the same way, judging by the expansion of IKEA over the years.

You go walking around in an IKEA store and look at furniture that feels, not expensive, but at least nice and while not built like a tank, will generally at least survive the inevitable couple of moves you make as a young person. Most importantly, you can afford it! Hopefully when it falls apart, you’ll be well off enough to at least have the option of buying good stuff, or you can just buy more IKEA furniture at that point. If you don’t move it or have kids/pets abusing it, it does hold up pretty well.

However, there is a dark side to the IKEA experience – you have to get that furniture home and put it together. There are many stories of struggling to go from flat pack furniture in an IKEA store to a finished product in your house, and here is mine: 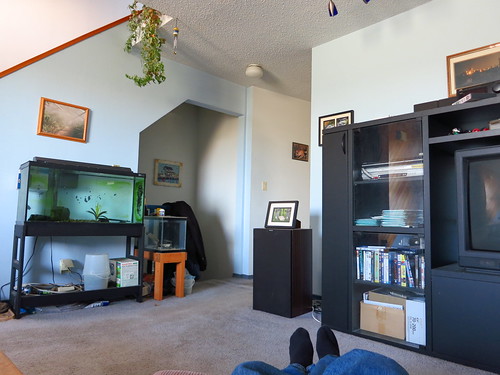 It was a dark and snowy night in the IKEA parking lot. I had just finished purchasing the entertainment center of my dreams (to the right, it’s so big I don’t have a photo of the whole thing :P).

Now, I am contemplating how to fit all of these large boxes in my Honda Prelude, not exactly a flat pack hauling vehicle. 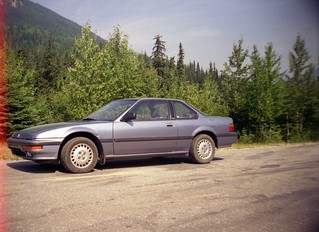 These are the kinds of problems you get into when you’re young and you think you can solve any problem with a bit of brain and muscle. Fortunately, the Prelude had the ability to flip the back seats down, opening the trunk to the the back of the car, so down go the seats, and in goes the long box. Still too long, so down goes the front passenger seat to jam that box into the front, all the while the boxes are starting to get mushy from melting wet snow. Finally, I manage to shove the long box in far enough that I can get the other smaller boxes in and close the trunk. No more snow falling in my car.

Now I have a new problem. The long box is wedged up to my gear box. I can get the car in neutral, but won’t be able to use second, forth and reverse gear, due to the box blocking the down throw for those gears. I’m not going to try re-arranging the boxes again in the deepening snow, just need to get home now, better hope I don’t have to parallel park when I get home! At least the roads are so bad, that I won’t be able to stop quickly enough to shift the boxes forward and lock me in whatever gear I happen to be at the time.

After a memorable ride where my right hand is either on the gear shift or holding back the long box when I need to brake, I arrive at home, gliding into my usual parking spot without the need to reverse. It’s still snowing, but I want to get this sucker inside and start assembling it! Extracting the boxes from the car turns out to be not quite as difficult as dentistry, and the smaller boxes are hauled up the stairs and down again to my basement suite. The long box, is another story. It’s full of 1 inch heavy particle board and is now heavy and slippery. Me and the box go down in the snow when I try to drag this thing up the steps, and the inevitable happens – wet box breaks open and particle board goes sliding out, in the snow, down into the road.

Well, at least that solved the problem of hauling the box. Now I quickly retrieve all the pieces, without having any run over on the road, and cart them in the house. Every towel I own is pressed into service to dry out the wet boards – in case you didn’t know – particle board is terrible for picking up moisture on exposed ends and then expanding and weakening into a mass of mush rather than board.

Most people would have assembly woe stories, and yes, this was a bitch of a piece to put together between all the doors, shelves and hinges. But one in the morning assembly was mundane compared to getting the boxes home in the first place.

Just another blog to share some thoughts with the world.
View all posts by ralph →
This entry was posted in rant, WhoKnows?. Bookmark the permalink.