I’ve been reading of late of a trend that I learned of on www.cheaprvliving.com/ The idea being, if you are about to lose your home or are squeezed to the limit just staying in your current pad, you can completely change your life for the better by just ditching the home entirely. You might be forced to live in your car after losing your home, but you also might deliberately make the choice. You might be looking to travel, but have no money. You might be retired, or you might work. In other words, going nomad might be the solution. This isn’t a new living style; the idea has been around as long as people had the ability to carry everything they own with them. So why am I talking about a lifestyle choice that has been around since the dawn of time? It’s the technology revolution in nomad lifestyle that interests me.

What do you need to be a nomad? You need to be able to carry everything with you, and you need to be able to travel. Have feet, will travel in the simplest form. A horse would have been a rich nomad’s travel means. Hitching a ride is a classic too, and has allowed further travel as technology progressed from cart to rail to cars. Nowadays, we have vans, motorhomes, trailers and campers tailor made to carry everything while traveling at a comfort level previously unknown to nomads! But it’s not high tech – all of those have been around for a long time now. 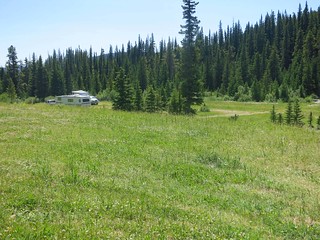 I’m talking about the gear inside – new things that make “boondocking” (to live in the boondocks) much more like living the comfy existence possible in a “sticks and bricks” (their term for a house). Let’s start with what I’m going to call the “made in China” gear. These are the cheap plastic organizers, trays, kitchen ware, among others that make setting up the inside of a van easy and cheap. Picture something like Lego: buy some plastic organizers, stack a plywood bed over it with a good memory foam. Add a cheap table and some chairs, and you’re good to go! There are a million cheap organizers out there too that you can use – and people are putting them together in many ways.

Next, we have the camping gear. Some of this has been around a while now, but with a camp stove, 12V fridge, LED lights and a solar setup to run it all, you can have pretty much what you had at home – morning coffee, salad for lunch, and a steak for dinner on your portable BBQ if you so choose to carry that! Again thanks to “made in China” it has all gotten pretty cheap, so you’ll still have money left over for that steak. You can also go the route of buying a cheap used RV – some pretty good deals can be had that combined with some “made in China” and gear modifications can be made even better.

Finally, we have the hi-tech part of the equation, that would be cell phones and laptops that allow you to actually work from your camp, assuming you can find a decent cell signal. It all comes together – if you can get yourself a gig that is work remote:
1) You don’t have to earn a ton of money because of “made in China”.
2) Portable gear makes your life almost as comfortable as a fixed location.
3) Data connections and computers make your work possible, plus you can stay as connected with the rest of the world as you want. Solar power allows you to go far off grid rather than relying on campground hookups.

Little wonder there are a ton of travel bloggers that have sprung up on Youtube. Lots of them are hoping to make enough money “vlogging” to keep their lifestyle going. As with many desirable things, only a few will succeed. Others have remote work/seasonal jobs, and just vlog to make a bit of extra coin, or keep the family up to date on what is going on. You have Bob Wells who runs www.cheaprvliving.com/ (Youtube channel). He’s a retiree on a mission to show others that there is a life beyond barely existing in your house on your retirement pension, or, for that matter, anyone who wants to do the work/travel lifestyle. On the other end of the age range you have Jason and Nikki Gone with the Wynns (Youtube channel), a couple of professionals that had a good early careers going, but gave it all up to travel first in an motorhome, then a sailboat. In the middle, you have a 50 year old Carolyn, (Carolyn’s RV Life) (Youtube channel) who was in the middle of a career in marketing, running her own company. She decided (ultimately) to drop out and travel full time in an motorhome. Youtube money isn’t great, but they have all supplemented their income with things like Patreon. Having 200K subscribers helps when gently asking for money to keep you going – if your content is good enough!

It will be interesting to see how this trend plays out – I’m interested enough along with many others to follow some of these adventures. It beats TV. In the long term we will see if it gets bigger or fades back to a few people again.

Just another blog to share some thoughts with the world.
View all posts by ralph →
This entry was posted in internet, money, The system, WhoKnows?. Bookmark the permalink.