Nothing is the same anymore

If you know where the quote the title of my post came from, then you are a person of impeccable taste. If you need to Google it, good luck, it’s not that obvious. But it fits my first day in White Tank Mountain Regional Park. I arrive at 9ish, having successfully finished making coffee, and thus being able to proceed with my day. “Making coffee” in an RV was a BIG milestone, I actually did something in my RV! Other than driving, of which I have had enough, at least stuck in traffic on the freeway.

I drive up to the now open gate to the park, and tell the lady who I am and that I have a reservation to camp. “Oh, you finally made it! she exclaims, grabbing my reservation package. The staff must have wondered why I never made it the previous night, so I gave them the brief version. Evidently, the gate closes automatically at EXACTLY 8pm. Other than the clock for the gate might be off, and the thing closed a minute or so early. We have a long conversation about the park, and it’s facilities, where I’m from, and on and on. I keep one eye on my mirror watching for someone to come up behind, but it’s a quiet morning, so we get to gab for a little longer than I’d like. But eventually, I get to drive in and find my campsite. I park it and take the classic “first camping spot” picture in my first rental RV. 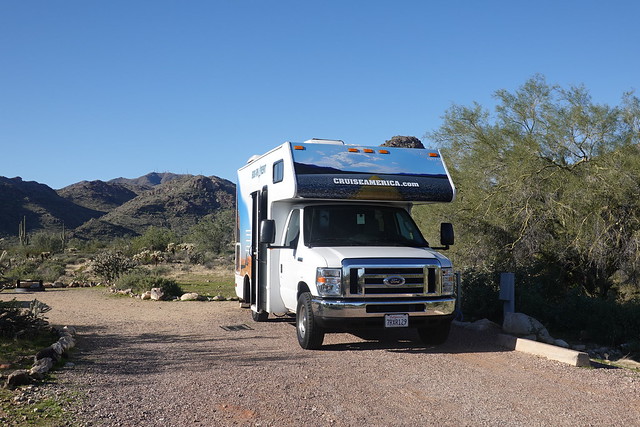 Pretty nice spot, I think. To the right of the photo is a small wash, and a trail head is on the other side of that, so the next camping spot is a ways down. I can barely see them through the shrubbery. To the left, there is a spot about 30 meters away, a good distance in a campground. Get myself level, and plug in water and power. Not hard to do, and I do remember a bit from my days RVing with my Dad. Take a look around. This is a very different world from what I’m used to.

But now I need to at least start dealing with the different world that is the inside of my RV. 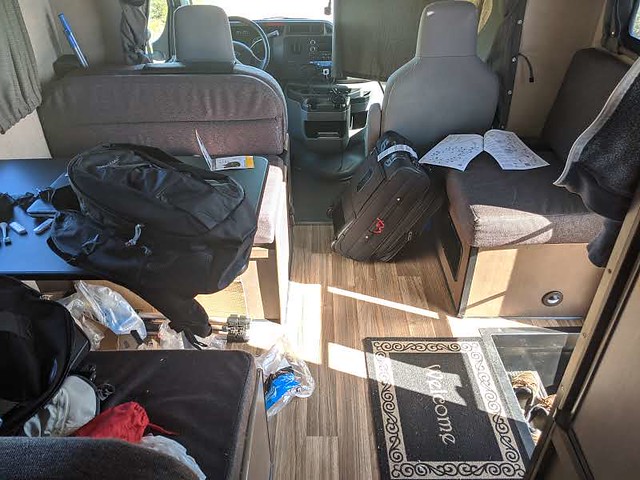 I put stuff away and immediately forget where I put it. Very annoying. Even worse several hours later. I’ve already re-arranged stuff a bit to make more sense, at least sense in that it’s closer to what I have setup at home. I wonder how many people do that, try to setup their kitchen storage as close a possible to their previous place, going back all the way to what they grew up with at their parents? But at least most stuff is off the floor now (you didn’t see the other direction in that photo, all on the floor in front of the kitchen space…

Time for a little hike! At least something to get a taste of what I came down here for. I decide to head out on the smallest loop for a little one hour (with photo stops) jaunt. It’s a wonderful afternoon of 20C with little wind, sunny blue skies. I could get used to this really quickly. I love the Saguaro Cacti – fascinating in so many forms. 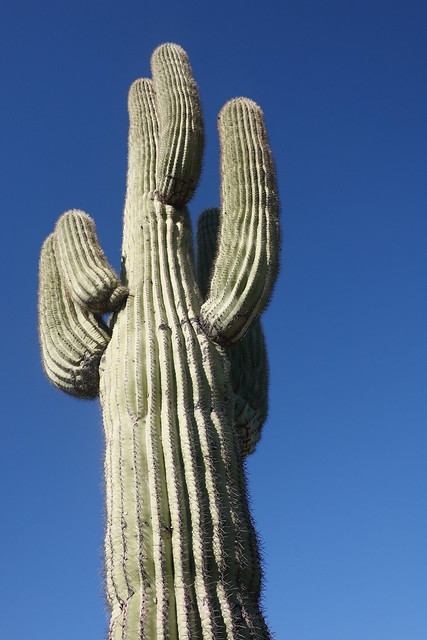 Then there is the feared Jumping Cholla cactus. I tried to goad this one to jump on me – I was only a couple of minutes from first aid should an attack happen, but this one was quite docile. 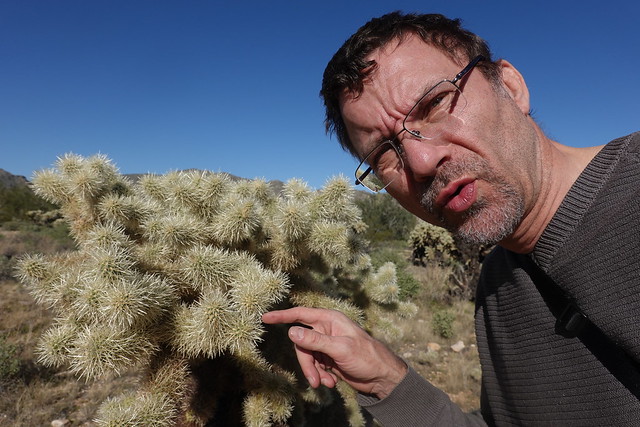 I will watch for these as I head further into the desert, they could get meaner as I get further away from civilization!

All in all, it was a nice first day. Next challenge, cooking dinner in this RV. I don’t even know what I want for dinner, never mind how I’ll prep it in this RV where nothing is the same as my kitchen.

Just another blog to share some thoughts with the world.
View all posts by ralph →
This entry was posted in pictures, travel, WhoKnows? and tagged RV desert travel. Bookmark the permalink.