I figured since I was doing a big hike, it was fitting I have a big breakfast, especially since I had had a glorious sleep and was feeling awesome to start the day, who wouldn’t feel inspired seeing this sunrise? 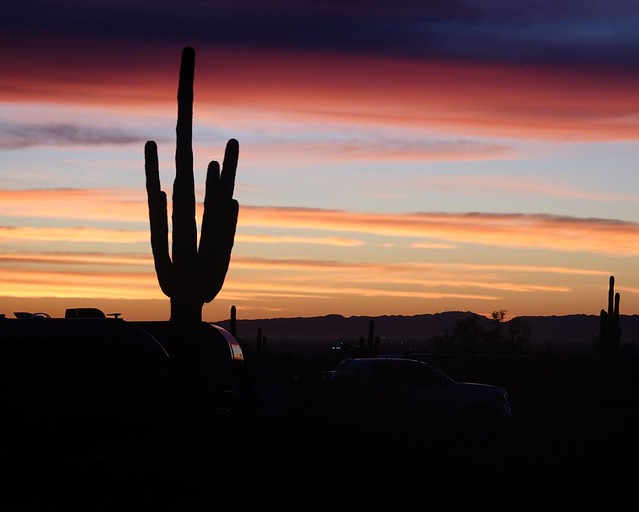 Three eggs, bacon and toast later, I felt ready to tackle anything, so I made up a sandwich lunch with some fruit and two bottles of water, checked everything twice and off I went!

I was being ambitious, hiking the “double diamond” most challenging trail in the park, but since I’ve hiked all my life I wasn’t worried about what the trail could throw at me. I was more worried about the length of the loop, 11 miles, a bit of a stretch with a late start to the day, and me not having hiked much in the last while. I had informed the campground manager that I was going to be gone for the day and had put up a sign saying I would be back at 5:30pm, sunset at this time and place. So, starting at 11:40am was going to be tight to do the whole loop. But I could always turn back I figured if I was going slower than expected. 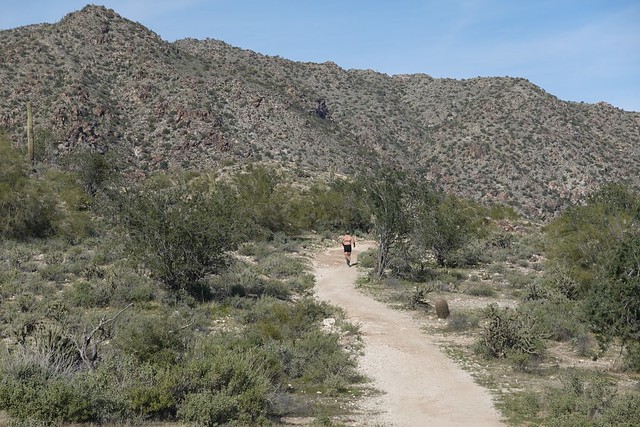 The beginning of the trail approaching the mountains ahead is easy. Fairly flat and well maintained, with benches along the way to take a break. This guy passed me doing a good jog, he was heading up Ford Canyon trail. Based on where he passed me going back, I think he stopped where “jogging” becomes “rock scrambling”, which is still a pretty good jaunt to be out with nothing. Oh well, to each their own risk I say. 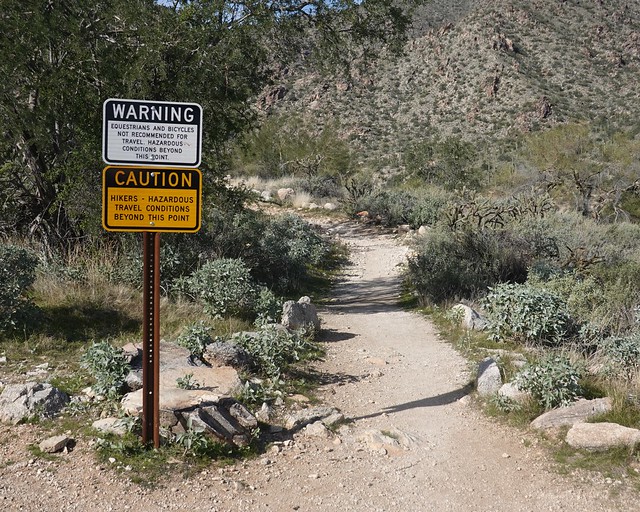 These signs marked the end of the easier trail, and the end of the benches spaced along the path. The trail starts to get rougher here, as you start actually climbing into the hills, with the path clinging to the canyon slope. 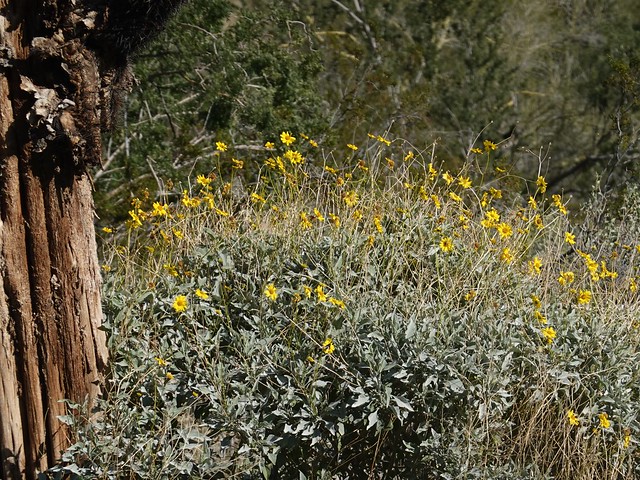 I was surprised to see some flowers blooming, nice to have some bright color along the way. I ran across a completely different kind of flowering plant further down the path, read on to find out more! 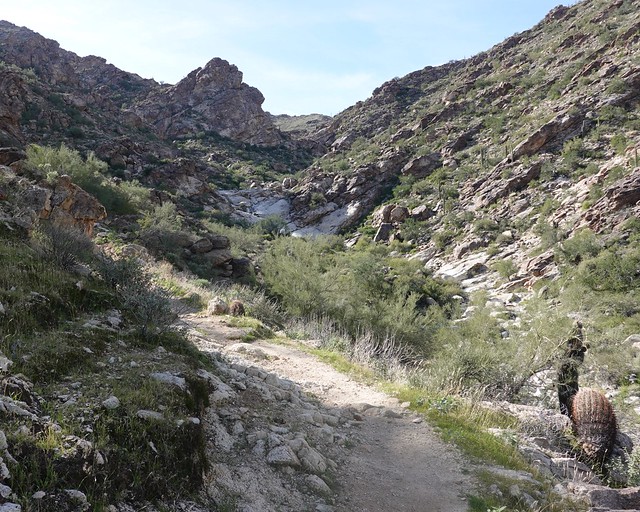 The trail becomes steeper and rougher as you go along, but the views become more interesting as a payback. I was happy at this point for my choice of trail. The sun was coming around, but hiking up the left side meant I was mostly in the shade, which was good as the temperature was about 15 degrees, certainly enough to sweat coming up the trail. 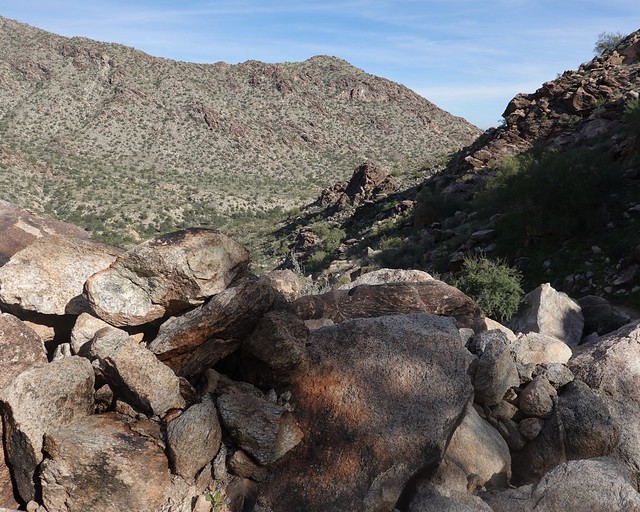 Eventually you need to start scrambling over rocks, first just some minor foot or two climbs, later more signifigant, but any able bodied person would be able to handle it. The path was surprisingly poorly marked in places. I ended up starting up one pile of rocks, only to find I was supposed to go up the *other* pile of rocks a few times. You need to pay attention, or you will find yourself well of the trail. You can’t really get lost in the daytime, just follow the canyon down again, and cross over until you find the more obvious trail down below. But it could be some rough slogging with no trail. Eventually I found I had to climb a large smooth rock slope, with a little bit of water coming down it. I see little puddles in the rocks, and as I get to the top, a nice little pool of water and a flat area. 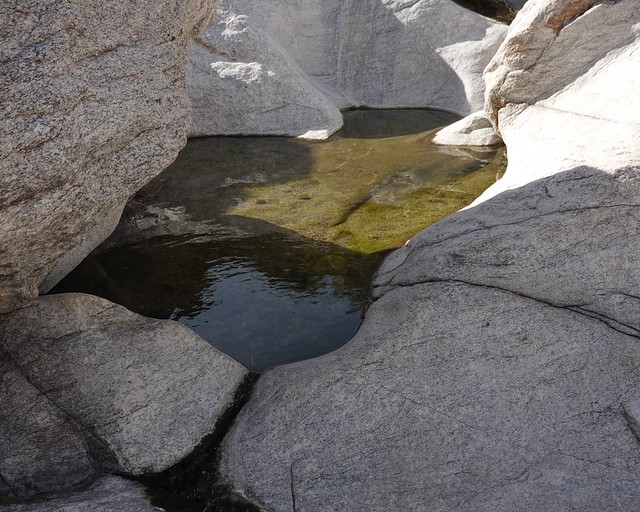 I ponder going on, as I think I’m not quite ready for lunch, but the area is so nice I decide to stay and take my lunch break there. I find I’m quite ravenous, the desert mountain air is great for stoking an appetite along with the hiking!

I do the expected lunch break photo of myself. 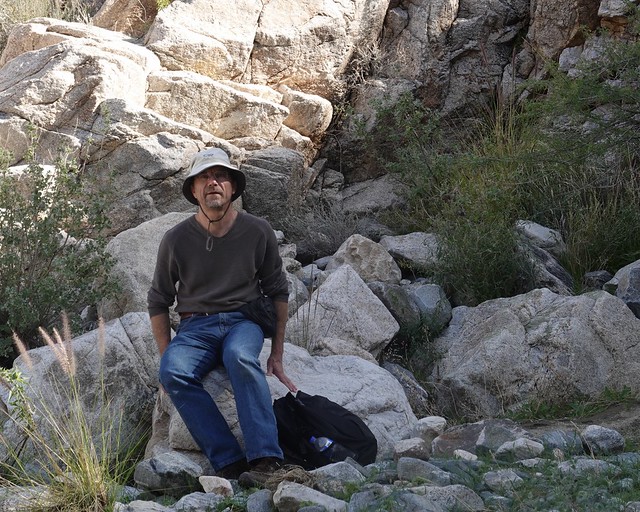 I really should have packed my beanbag tripod, would have helped set this up so much easier. Oh, and I totally finished my first bottle of water at lunch. I’m not too worried, it’s not too warm and I’m not sweating that much. I look at the time and my progress so far. Allowing for my lunch, I am right on time to make it back by 5:30, if I were to go for the whole loop. Hmmm. Let’s go for it! I’ll just have to walk more and photograph less to make it back on time!

Only a little more climbing up and things level out. I’ll call this area the “upper canyon”. Beautiful up here. We have the Saguaro cacti with the red rock faces behind them, for starters. 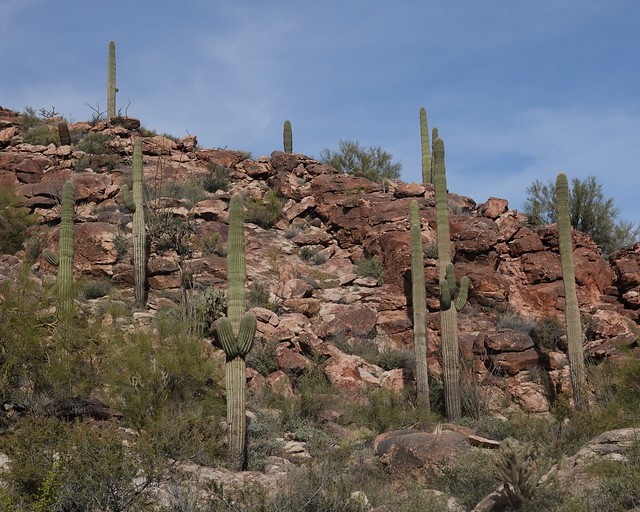 Then there were these bushes that were still in fall colors, or going dormant after the rains from a couple of weeks ago. 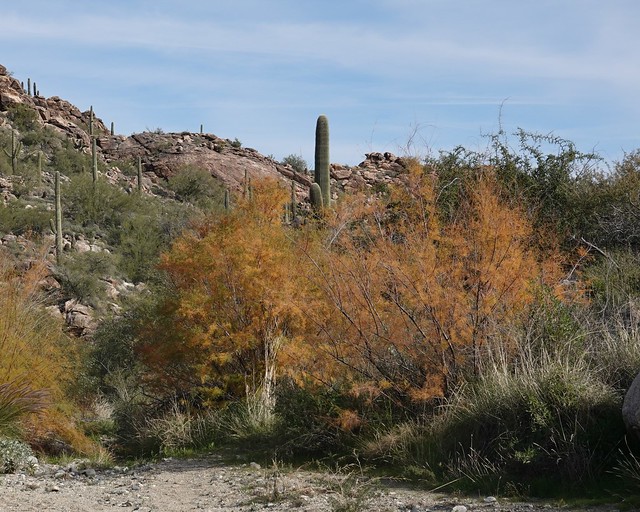 All in all, just some amazing views in the upper canyon! But to do a loop, you need to climb out of the canyon, over a pass, and then drop down into Willow Canyon. That means a lot of elevation gain ahead, and switch backs. Really, this was the only boring part, climbing between two peaks to reach a little pass between two peaks. But I could turn around an look back at Ford Canyon for a good ways, which was still there in it’s spectacular glory!

I’m starting to watch the clock now. Still stopping for too many photos, concentrate and climb to the top, at least we hope it’s the top! Finally, we make it to the mile 6 trail marker, which does turn out to be the top! Check the time – we’re doing OK. Should make it back in good time. Time for a picture up here! 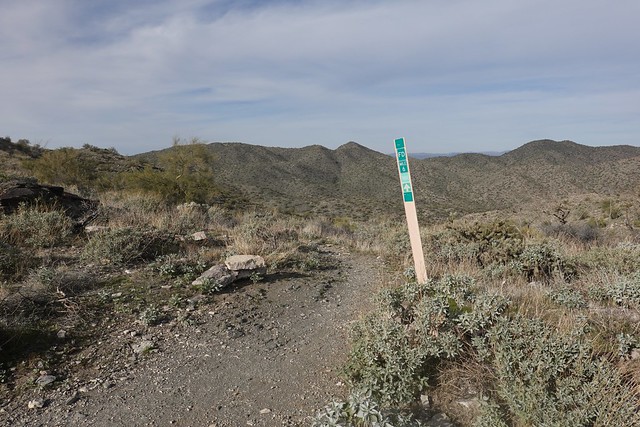 Yeah, I have a bunch of panorama shots I’ll have to deal with when I get back. Or on a rainy day out here. So many photos, so little time. I started down the trail and noticed this strange shrub I’d seen a few of so far, but not so nice as this one. 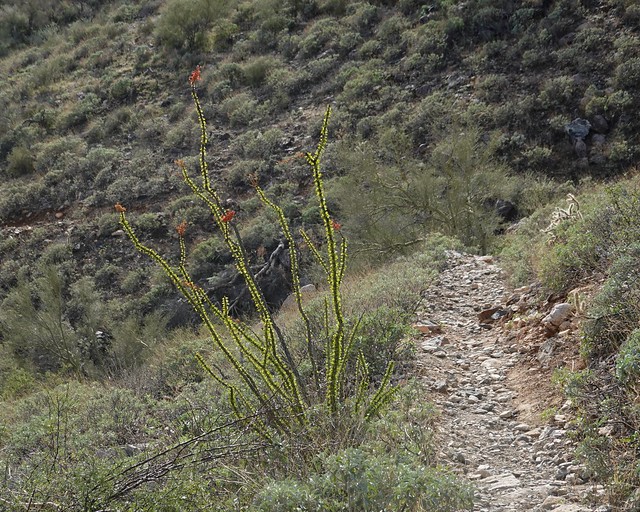 It has pretty red flowers about the size of a ping pong ball. 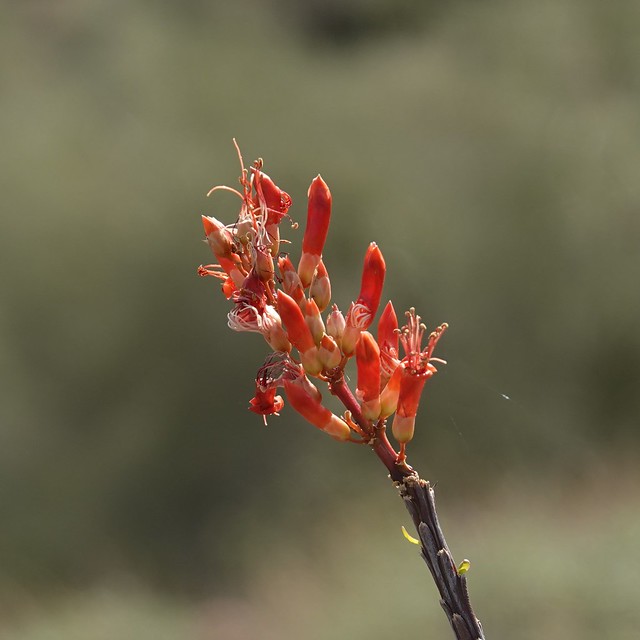 From my reading in finding out the name of this plant, I learned that hummingbirds like these. That would be a cool shot, with a hummingbird!

I note my water situation, half a bottle left. But it’s not getting any warmer, and we’re going downhill, should be OK. Down we continue, sometimes up a bit again. Phoenix comes into view, way, way down there. I drop down into the Willow Canyon, still way up, and actually climb back up a little on the other side, avoiding the steep canyon walls. Long ways down still, not knowing how the trail is going to drop. My time looks good, but a good stretch of steep downhill slows you down as much as a steep up, you need to go slow to avoid slipping on the down slope. Eventually, I come upon a family hiking up – trail can’t be that bad if they all made it here. Come to think of it, the whole back stretch of trail I never saw anyone there. I guess the “double diamond” status scares a lot of people off that, not to mention the length.

I get a better view of Phoenix ahead now, still not really dropping down. 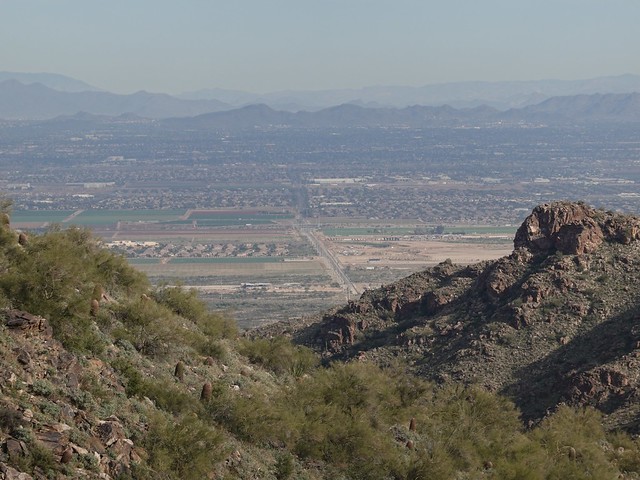 It’s really pretty up here too, but I think Ford Canyon is prettier. But this is not as bad a path either: a version of no pain, no gain. 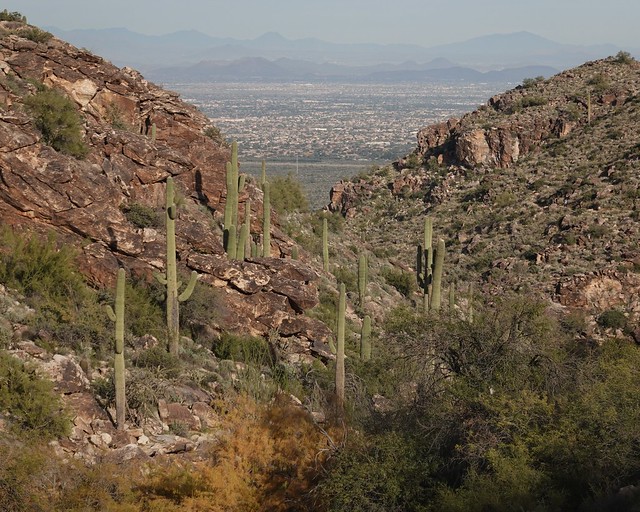 Finally, we start dropping down. More switch backs, which I appreciate more going down, as you can keep up your pace and not worry about slipping so much. I get down without any steep paths, and find my way back to the connecting trail that will complete my loop back to the campground. Still have 1.5 hours left, looks like enough time! I finish the last of my water. Yeah, I should have taken a third bottle, but I know I’m not going to die from thirst now! Trudge down the now comparatively boring flat desert, still not sure about my time, so I’m hustling a bit. Then I see the campground, I’m back an hour early. Could have taken more pictures. Time to get a beer, I’m thirsty!

Just another blog to share some thoughts with the world.
View all posts by ralph →
This entry was posted in pictures, review, travel and tagged RV desert travel. Bookmark the permalink.