Unexpected Discoveries are the Best

I have not really talked about what the desert is like here yet. In my defense, it was Christmas, there was more socializing, and less blogging – a good thing! But let me fast forward to two days after Boxing Day, where I got out for a little more ambitious hike to the main wash the runs down this valley, with a little surprise encountered along the way.

I had gone for a little walk through the Roadrunner BLM area on the morning of Christmas Eve. Nothing special, but I noted that various rigs were scattered about – there are more people out here than you’d think just sitting in your camp, noting the one or two other RVs you see around you. I was surprised that there is more greenery than I expected, shrubs and drought tolerant trees are scattered along any area where water runs down during the infrequent rains. Oh, I should mention we were actually getting some rain, just not quite enough to start the water flowing down the washes.

Today was planned to walk down a pipeline right of way to a large wash I later figured out went miles up the valley and eventually turned west into the hills. 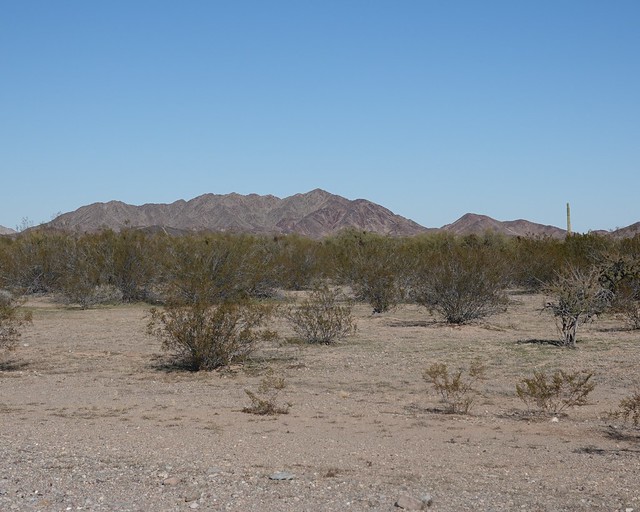 You know you are approaching a significant wash not by seeing gravel ahead, but by seeing vegetation – a line of shrubs and trees ahead announce you are coming to a wash of some significance. Thus, I approached the trees and shrubs of what the googles call “French Creek”. I did not trust the googles on either name or type of water body in this case; looking at an Arizona Atlas on loan to me, I see we were in Tyson Wash, with French Creek entering the wash right at the knoll I was to visit soon.

Washes are a new thing for me. In the Prairies of Canada, only small streams flow intermittently, they generally don’t have large gravel beds you can walk along. Here, everything is intermittent, including what would be a fairly large river when bank full. 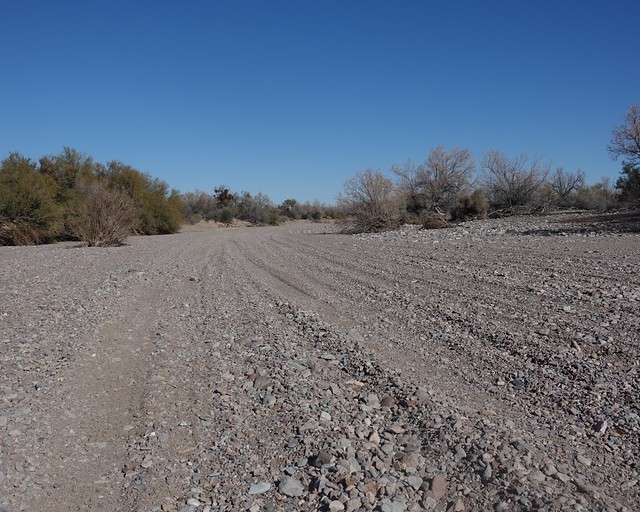 You see a lot of tracks along these large washes – 4x4s use them as roads, but you wouldn’t want to take a car down them – the gravel has some very soft areas and you’d sink in to your axels pretty quick. The gravel also has some interesting rocks, if you’re into that thing. You can have a pocket full of different colored rocks pretty quick in these parts – rocks all over the place! 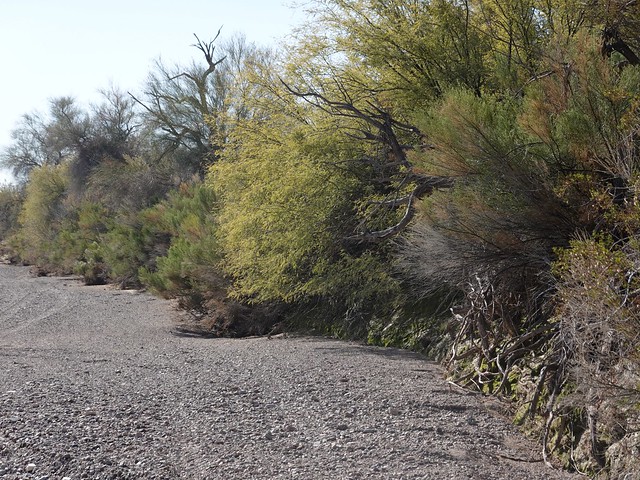 Also the large washes can have pretty much solid tree cover right at the wash edge – picture this with water in it and it would be your regular river with trees along the banks. 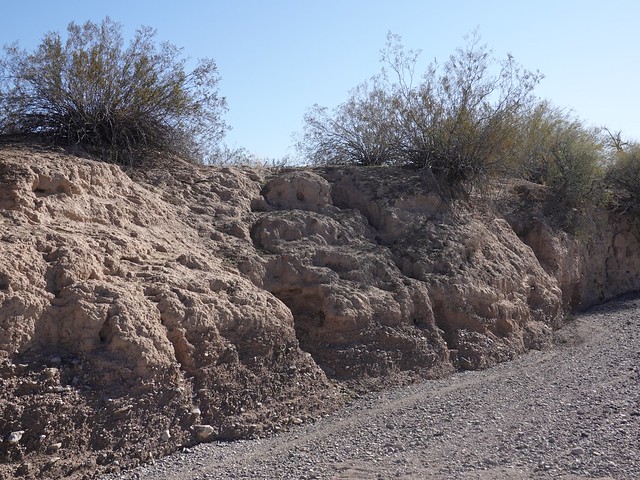 The washes also show the historical geology of the area – it has been alternately eroded down and filled with gravel and sediment. You pick up rocks that have bits of different rock types glued together – these have been buried deep enough long enough so that the pressure forced them together into a rock. Think about how long that took to happen, those of you who think ghod created the earth in seven days and that the history since then is 3000ish years.

My plan was to walk the wash upstream to La Paz Valley Road, then see from there how to get back to camp – either by road, or cross country if things were open enough up there. Walking on the wash is good exercise, the softer sections suck the energy out of your stride forcing you to push harder to move that next step forward, and so much easier on the legs! I exit the wash as La Paz Valley Road, and see things are pretty open – I’ll parallel the road for a bit then cut the corner back to camp. But up ahead, I see a yellow flag flapping in the wind. Marker of some sort? 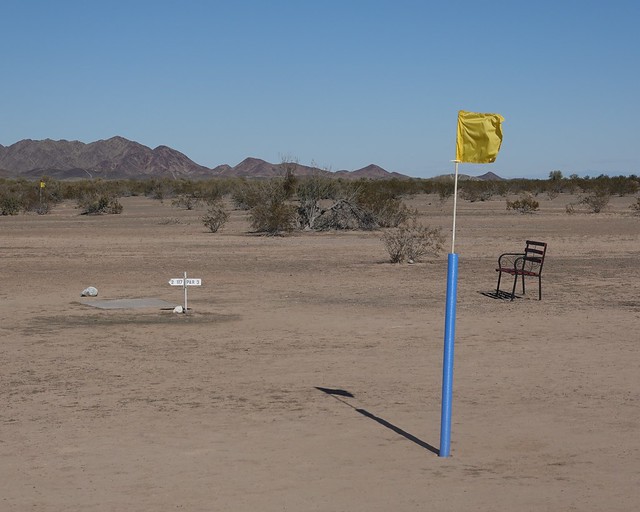 It’s a golf course, placed on the flattest part of the desert out there, no wash to be seen or humps or anything! Whomever designed this course had a sense of humor at any rate, between the name and some of the details around. 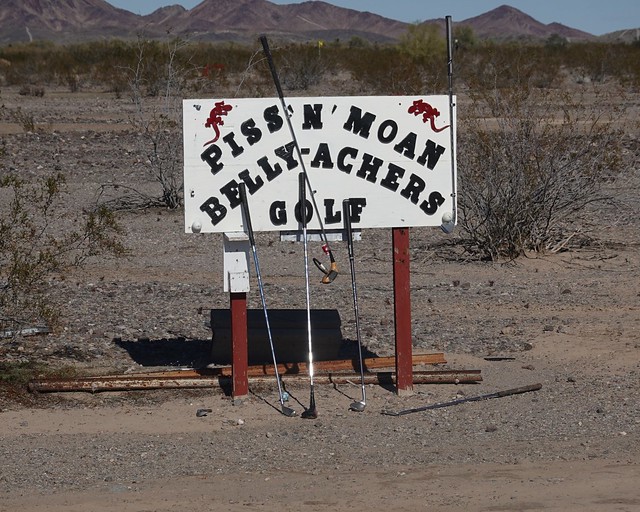 I approach the first hole, and see that they have helpfully left some clubs behind for those that just want to spontaneously golf. Unfortunately, there are no golf balls, or I would have hit a ball for at least one hole. 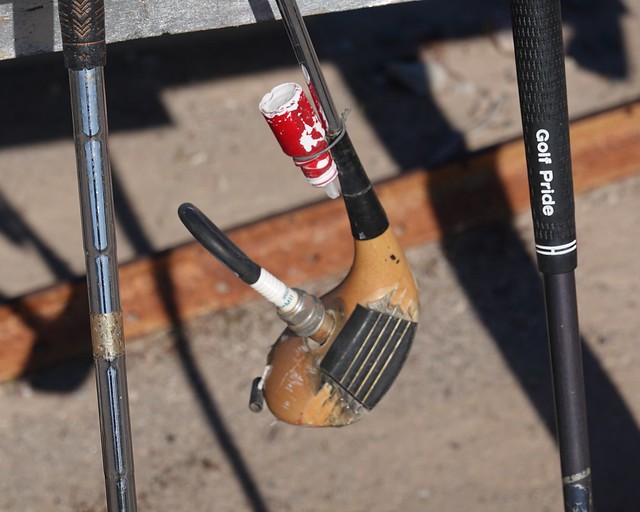 Who wouldn’t want to try at least one hole with a motorized golf club? But I see they have that club tied down – perhaps you need training and a license of some sort for that much power. These kind of discoveries are what I live for on vacation, or for any random walk in the city for that matter. You don’t get these if you go on a tourist jaunt, or just rapidly travel from tourist destination to destination – trying to cram as much in as possible. I got a good chuckle out of the gas golf club, plus a neat little desert discovery. I’m not all about nature and wilderness, people do some cool shit sometimes too.

I finish my walk back to the camp, satisfied I have seen some new things today.

Just another blog to share some thoughts with the world.
View all posts by ralph →
This entry was posted in hike, pictures, travel, WhoKnows? and tagged RV desert travel. Bookmark the permalink.