In socializing around the fire, you find that among kindred spirits, secrets are shared that you just wouldn’t tell someone you’ve only known for a short time. There is something in the human DNA that tells us if they’re OK to be around a fire with, you can trust them with your deeper thoughts. I know I’ve gotten to know Larry and Carolyn better than I thought I would, especially Larry – who turns out to be a wise and deep thinking man who always seems to have an insightful contribution to the topic at hand.

But sometimes you just get a hot tip, and that is the subject of today’s post. Pamela was one of the visitors that came by, and she was returning for a second brief visit with her friend JR. I saw them pull in with one of those 4X4 off road things, wondering who they were. They were just finishing visiting with Larry, and came over to my Rig to say ‘hi’. We had talked about my time in White Tank Mountain Park, and my pleasure at seeing Petroglyphs. They mentioned there were some here too, not even 2 miles away! JR kindly gives me the coordinates, and I record them on my phone – going to visit these for sure.

The next day, Larry and I decide to take a hike to these Petroglyphs. We’d been on a short hike in the same direction, but only as far as the wash, not downstream to the Petroglyphs.

We follow the coordinates, first going down Old Yuma Road, then going cross country towards Tyson Wash. This isn’t hard to find; even on Google Maps the satellite view shows a sudden 90 degree zig-zag of the wash that is it cutting through the knoll we were heading for. 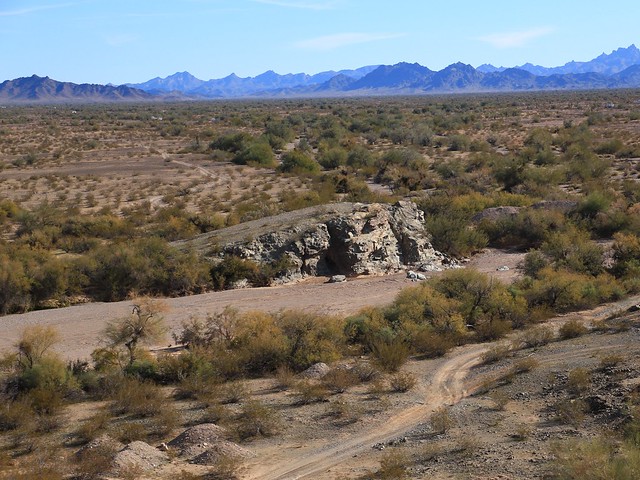 We come in from the right side of this picture, and immediately spot petroglyphs, not as many as I saw at White Tank Mountain Park, but more distinct. 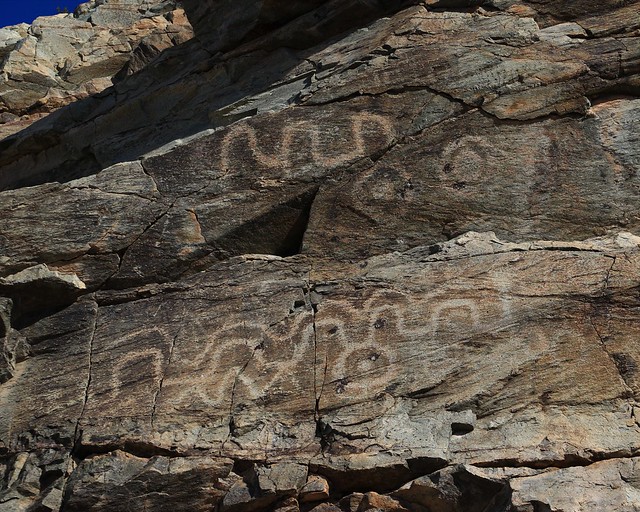 I wonder again what they mean. I feel like the lower one represents the wash, going by the knoll (bottom circle with a dot). But that’s just my thoughts. 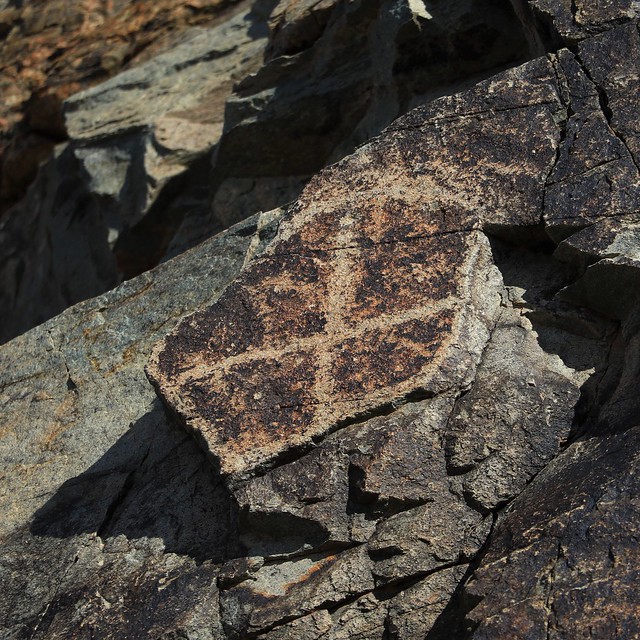 This one has obvious western meanings, but I think there is a missing circle going around, the top bit still is there, but the rest has fallen off. “Intersection” is my sense of what it is saying.

We wander around a bit, then go past to the knoll we dub “Peace Knoll” as the 4×4 paths wandering up and down it look a bit like a peace symbol from afar as we approach. It’s a nice day at the top, we have a good view of the area south of, and into Quartzsite. 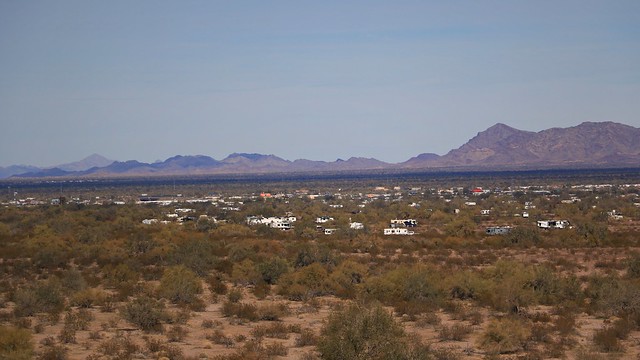 You can see just how may RVs are parked around the town, not even obvious where Quartzsite ends and BLM camping starts – people like to camp close so they can walk into town. This isn’t even half of it – there is camping where we are further south, to the north, and for all I know, east and west too. No wonder Quartzsite is so busy.

But we enjoy the view up there, even with a few 4×4 things going by occasionally. 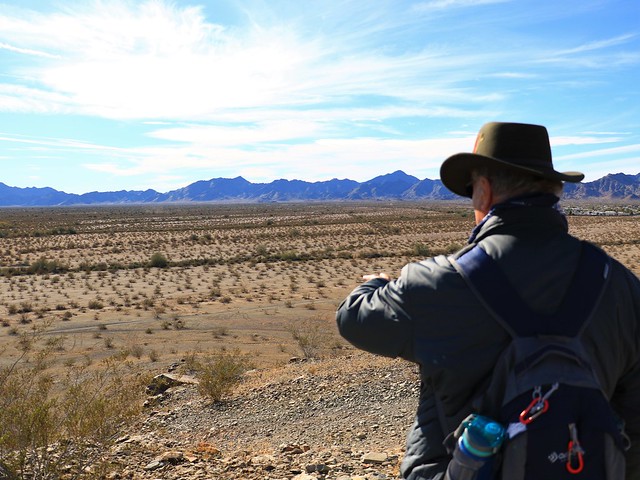 We come back down the knoll, and decide to explore around the other side of the wash. You see an area against the wash where it is obvious camping happened – there is evidence of old soot against the overhanging rocks. We discover later a small cave on the other side of the wash, on the north side of the petroglyph knoll, labeled with Petroglyphs. A good place to shelter from the most extreme weather. But our best discovery on the side we are on now is bunch of grinding holes. 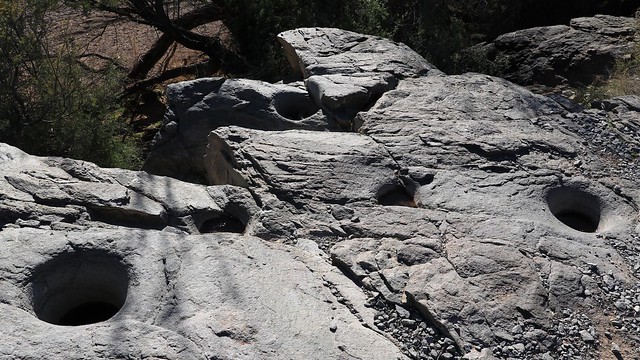 The former inhabitants of the area would have ground corn into meal, the deeper holes would have been used for a long time indeed to get so deep. 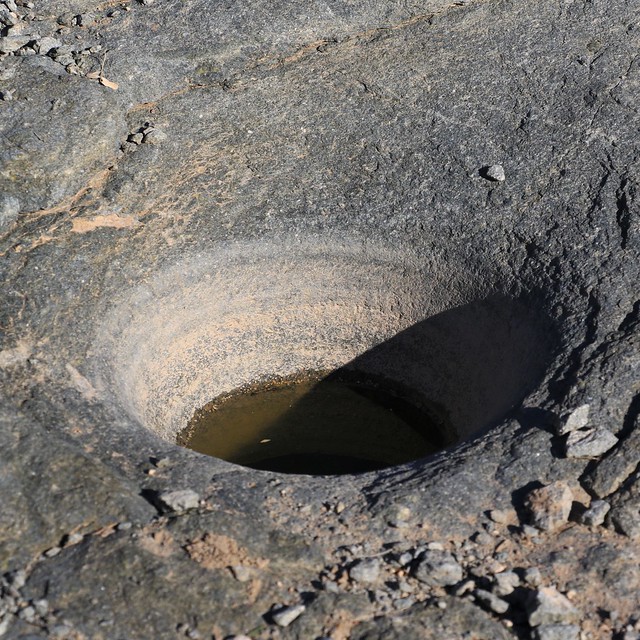 I am brave enough to put my hand in the water and feel the bottom underneath the small rocks that have fallen in the holes – perfectly smooth, so definitely used for grinding. An added bonus in a water parched area is that the natives could have collected water upon arrival, if the rains had been recent enough to leave something behind in the holes. A very cool find – not sure Pamela even knew about them as she didn’t mention them as part of the site to explore.

After a good long exploration of the area, Larry and I trod back to our camp. Beers are cracked tales are told. We are both of German background it turns out, no wonder we seem to be getting along so well.

Just another blog to share some thoughts with the world.
View all posts by ralph →
This entry was posted in hike, pictures, travel, WhoKnows? and tagged RV desert travel. Bookmark the permalink.