Proselytism by Math in the Pass

It was time for me to leave the camp Carolyn had invited us to. She had left the previous day, not even saying goodbye to me, but not for lack of trying. She caught me in the classic awkward RV moment, I was in the shower, for the second time in this rig so far. I had the generator and the heater on, which make a fair bit of noise – but I thought I heard a knock on the door. I stick my head out of the bathroom door, not totally sure I head a knock, but after a second yell “I’m in the shower!”. No response. I hastily finish up, get dressed and open a curtain to see outside, only to see Carolyn taking off in her RV. Crap – crap, crap, Crap, CRAP! Find my phone – she can’t have left without saying anything, I thought she was a friend?

Yes, there is a text message. Flurry of texts ensue. She’s going off to do her alone thing for a bit but will be back for New Years. Sweet, I still have a friend!

But today, I was feeling the same thing Carolyn had, I needed to get out on my own a bit. Larry is a great guy, but I have been socializing tons the last week, the call of solitude was strong. My planning of camping spots prior to this trip was minimal. I knew of one spot I wanted to check out near here, about an hour away by Vicksburg. 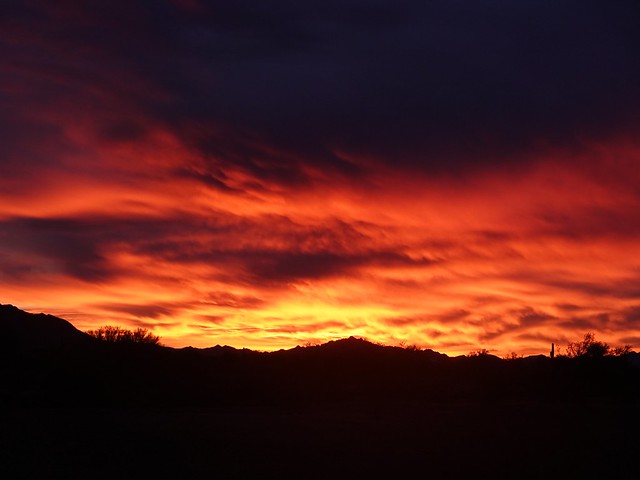 After seeing another glorious sunrise, I pack things up. Definitely getting easier, knowing where stuff is. I check everything over, and prepare to drive off.

But first to say goodbye to Larry, at least for now. Larry has been great to hang out with – he’s out here on his own for the first time, both in terms of RVing and in terms of being single again for the first time in a while. We’ve had deep thoughts around the fire. We’d drank beer together and laughed. Two Germans and beer, what do you expect? We ate a meal together I cooked – the first time I have ever cooked for two in this RV.

He informs me that Carolyn will be back for New Years, perhaps a bit hurt I am leaving him, yet he says I need to move on – see more of the world around here. Larry gives me a hug goodbye. I think I’ve made a friend today.

I depart, knowing I’ll be back – excited to see what I might find. But first, a stop in Quartzsite at “RV Pitstop”. This is a business you only see in an area where many RVs gather. They need to get propane. The need to dump their sewage tanks. They need to fill their fresh water tanks. That is what RV Pitstop is setup for, to cater to those needs. Everything is laid out so you can drive in and do your business, efficiently and without much hassle. I paid $17 for dump and water, which isn’t even that bad a price for this part of the world, there is cheaper, but I doubt setup as nicely as this place. It is a busy place though, I get directed out of the line, which turns out to be for propane, and do my business at one of dumping stalls. Then I drive a little further down and get water – good that they keep the two well separated.

A run for laundry – while that is going, walk down the block and get groceries/pharmacy stuff. Quartzsite is too busy for me – lineups and people everywhere. Going to try and avoid it if possible coming back through here, but it has everything, and is located in the middle of all the desert camping – thus, busy and difficult to avoid.

I proceed down the road to the other kind of dump and finally find out that there is some form of recycling in the state of Arizona – I have not seen so much as a can/bottle bin up until now. I hand over my trash and happily head over to the recycle bin to drop off my glass and cans. You never throw out a can in Alberta – the 5 cent deposit encourages that.

My googles map tells me I should head back south to Interstate 10, but there is an alternate route via Plomosa Road. Quick check, looks paved, goes through a little range of hills – only adds 20 minutes to my trip – let’s go that way, going to be more interesting than the Interstate at least!

I turn north on Highway 95, and then turn onto Plomosa Road when the googles tell me to. This road is still paved, but it’s a narrow two lane winding thing. I have no idea what the speed limit is. Arizona seems to not bother putting up a sign in many cases at the beginning of roads, or after major intersections. I guess 55 mph, and set my cruise thusly. The road heads to the hills, and starts to wind a bit. I’m passing BLM land on both sides of me, with RVs parked close to the road here and there. Eventually, the terrain gets hillier and the RVs stop appearing. The road starts to wind a bit and finally I get a sign telling me 35 mph for the next bit. I slow down, and enjoy the hills I am climbing into. It’s not a tall set of hills, so in short order I round a sharper steeper bend and suddenly I’m at the top. A sign tells me there is some information ahead, so I slow down and pull into the turnout. 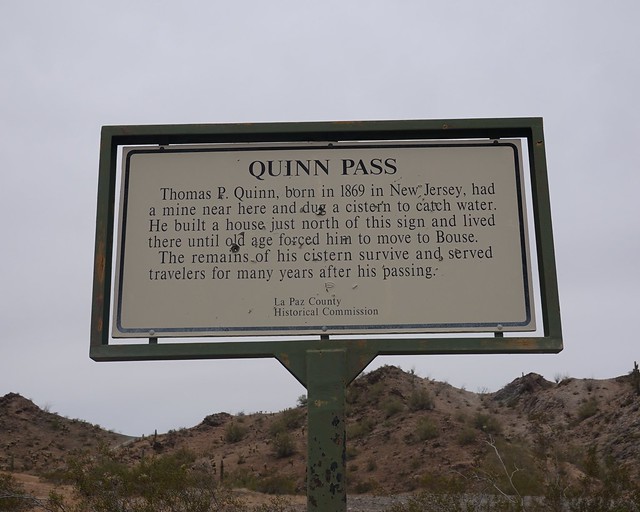 There is a little road heading up into the hills. I have learned from watching RV videos it is best to scout ahead a bit on foot, see if you can drive an RV up. This I do. You can drive a little ways, there is a spot to camp, but still pretty close to the road. Then the road goes way down, and then way, way up – I could get my RV up there, but I’m not brave enough to try that on speculation at this point.

I walk back to the rig and sit there for a minute, and enjoy the view. Suddenly, I notice a fellow crossing the road, right in front of me. Where the hell did he come from to be way up here? He walks over, grin on his face – looking like an old miner who is about to tell you a grand tale of discovery. He points the way I’m going “No cell service over there” then points the way I’ve come from “Cell service over there, gotta walk over the pass to make a call” Oh, reach out (and walk a while) and touch someone. I see, no miner here, just a long(?) walk to make a call. 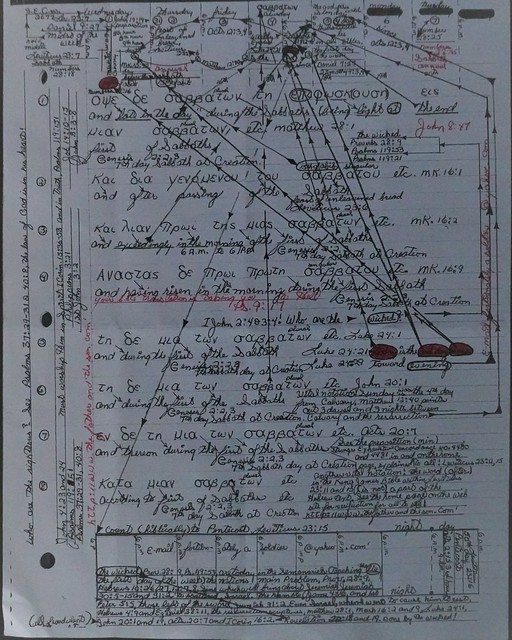 He hands me a piece of paper that looks like something out of an ancient astronomical calendar. He points at numbers on the page. “See, this three, plus this two is five. See this seven?” “Seven and five are what?” He asks. I wasn’t expecting a math test and re-gear my brain for a moment of math rather than religious arguments. “Twelve”, I answer, far to slowly for my liking. He traces along the lines “plus this two is 14, ending on the red 14.”

OK, I’m making up the math to get to the 14 But I know he started with a three and a seven and somehow ended up on 14. You look at the paper and figure it out yourself. I’ll even give you the web site: www.thefatherandtheson.com. Not linking to it. Copy and paste it at your own risk. He goes on about the treachery of the church. Can’t argue with that. He finishes his speech. I’m pleased – I get people at my door far more persistent that this. I offer to shake his hand, he says, “I shake hands with this”, and hands me a card that summarizes his speech. How helpful. It’s full of references to the bible that supposedly prove some great conspiracy. Same website as listed on the paper I got.

He tootles off down the road to make his call. I drive on down the pass and discover not very far away a group of RVs camped – I see now, the old guy probably walked from over there – mystery solved! Sometimes, rather than going out to discover things, the discovery comes to you. Proselytism by math, go figure.

Just another blog to share some thoughts with the world.
View all posts by ralph →
This entry was posted in pictures, rant, review, RV, The system, travel, Uncategorized, WhoKnows? and tagged RV desert travel. Bookmark the permalink.