After a very sober New Year’s celebration that ended before the beginning of the new year, we were actually fresh and ready for a hike this first day of the new year. Carolyn was interested in seeing the Petroglyphs we had got to previously, and we were more than happy to show her something she had not seen. I figured it would be a nice break for her from her normal work routine.

Little did I know, the life of YouTuber is all work, at least if you want to have something to post on a regular basis. Now, I should qualify that, yeah, you may be having fun doing something, but as a vlogger, you are always thinking “this is fun, I should film this”, or, “I need to fix my shower head, I should film a ‘how to’ while I’m at it”. I understand this problem a little better now, I’m thinking the same way blogging this adventure – ‘That was cool – I need to remember to write that tonight for the blog…’

We start our walk. Carolyn is multitasking – trying to get her video posted, and onto the other social media platforms. The internet signal is good, we are walking on a road, so she can get away with this. Eventually she is done, and can enjoy the walk cross country a bit.

We approach the hump, looking again at the ancient scratchings in the rock. The different light seems to reveal new facets to the work – I study different areas again in the new light. 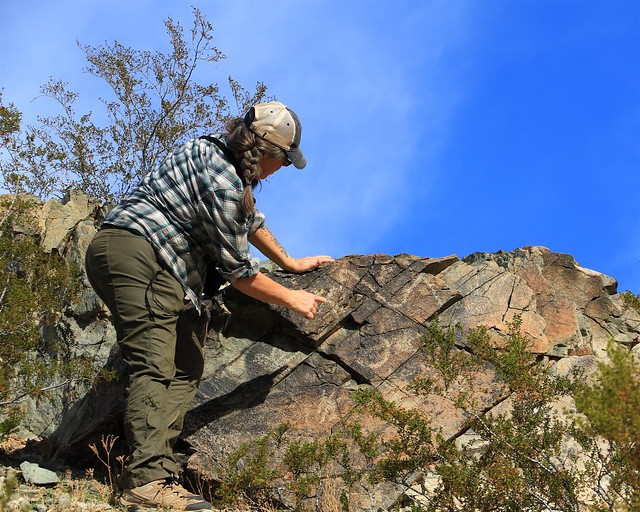 Carolyn is fascinated by the drawings – it is nice to see her thinking about something other than work. 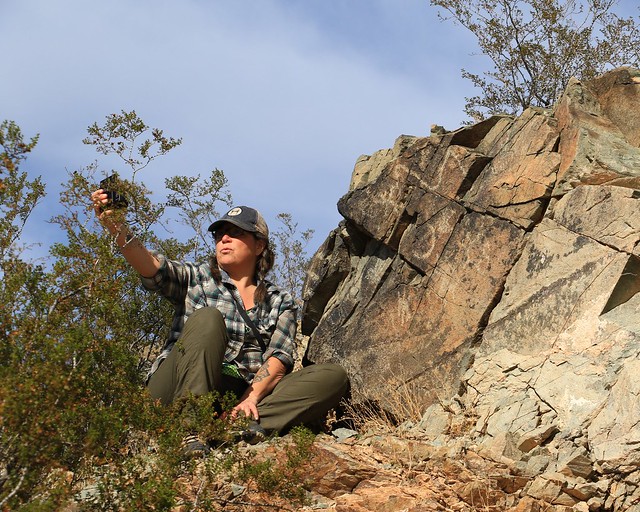 But before long, she is back at it, videoing for some potential future video in the works. For those of you that say that publishing videos on YouTube isn’t “work”, well, you couldn’t be farther from the truth. You can’t just have fun and oh, let’s get some video of that. You need to be thinking of it *all* the time, and be ready to shoot. Kinda puts a downer on anything fun you do. Then, you still have to transfer your videos, edit them, sort them into some coherent story – post them to YouTube, post to all the other social media about your new video, with still pics to draw people in. 9 to 5 and you can go home and relax is sounding not so bad now, is it?

It goes on like this, there is some looking at cool shit, some video, some pictures. 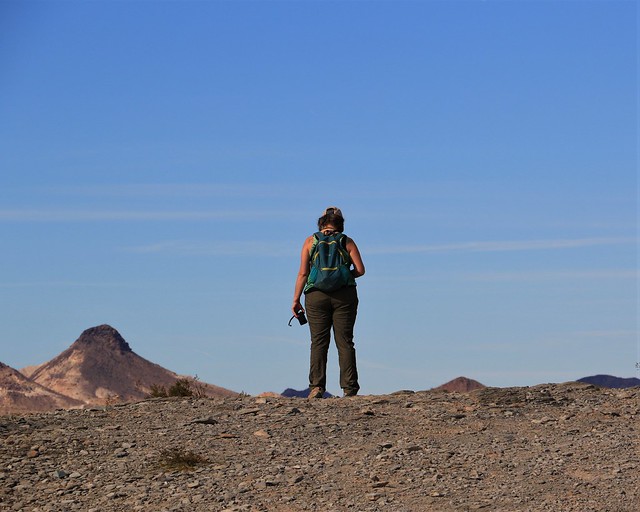 She wanders off for a bit. I can but wonder if she is having a contemplative moment or busy working the phone, on the internets doing the work that has gotten her to over 100,000 subscribers on YouTube. 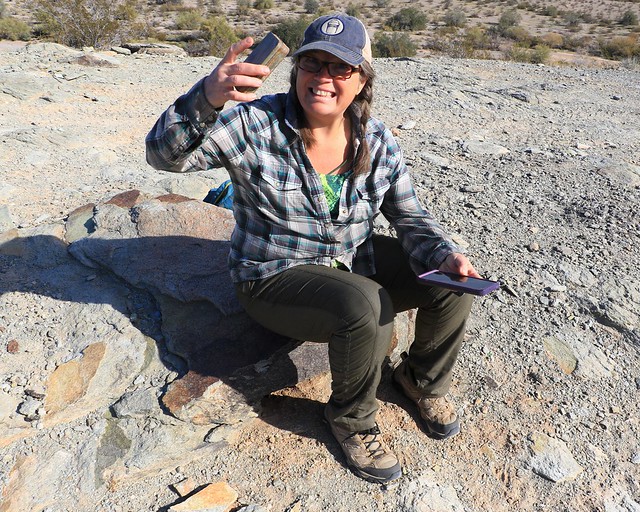 I was wondering if there was a geocache up by a marker on top of the previously dubbed “peace hump”. We climb up. Carolyn throws her pack down on a rock and turns on her geocaching app. We hunt around the marker, but the app says it’s over to the northeast of us. We wander about. I’m dubious, the 4×4 things drive all over the place, where could you hide a little box that won’t get run over? We wander back and forth, eventually zeroing in on Carolyn’s pack. The geocache was in the rock underneath it, go figure. She triumphantly holds the box and opens it to see what goodies have been left inside. There is paper to write a note, but a pen, who has a pen? I remember, I am still carrying my pen with Pam’s name on it – she is on this trip with me too. Carolyn takes the pen and writes ‘Carolyn, Ralph and Pam, Jan 1, 2020’ “She made the trip up here too, her name should be there as well”, Carolyn solemnly states. I think of my friend departed, who in leaving led me to the new friend in front of me who has just shown me some of the same caring insight my old friend had. I know the world doesn’t really work like that, but we find meaning where we can. 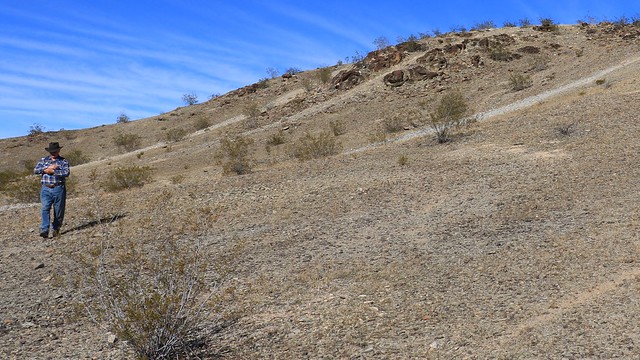 We climb down the hump and head back to camp. I see that Carolyn is distracted again by the phone. Here is another aspect of the life of someone who publishes on the internet – you get comments: nice comments, rude comments, comments that are totally off base, and comments that are meant to elicit a response – be it rage or otherwise. I realize she is talking to herself, angry at a comment posted about her latest video, I presume. The fingers fly on the phone. Such is the life of a YouTuber.

Just another blog to share some thoughts with the world.
View all posts by ralph →
This entry was posted in Computers, hike, internet, pictures, Podium, review, RV, The system, travel and tagged RV desert travel. Bookmark the permalink.