Today I decided to do a little more ambitious hike, to a hill I could see in the distance. Since I had a whole morning, I figured I’d see what there was to see further on the horizon. 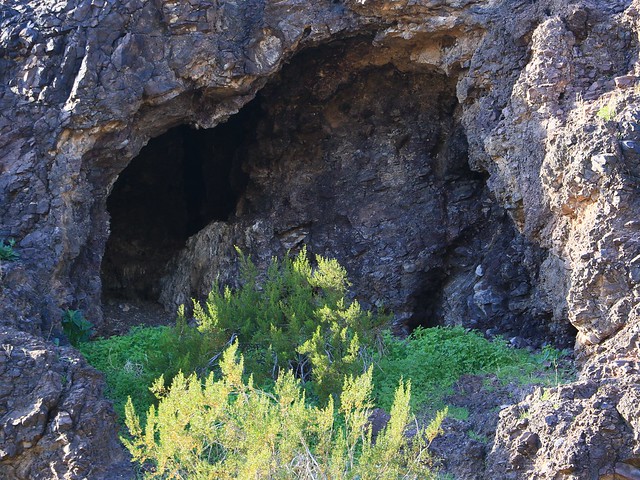 My first find of the day was a small cave. I try to walk a different way every time between or onto different hills – never know what you might find – could be a new mine, or this cave! 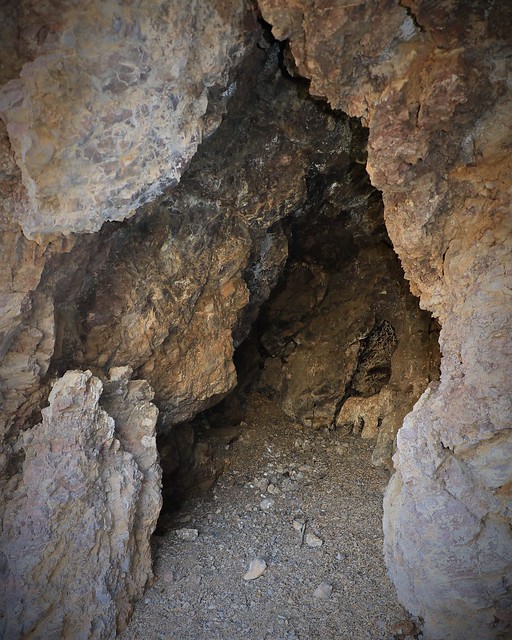 It only goes in about ten feet, but it is more cave than I have found so far in my travels. It even has a rock shelf off the ground you could sleep on, not a bad shelter from weather. 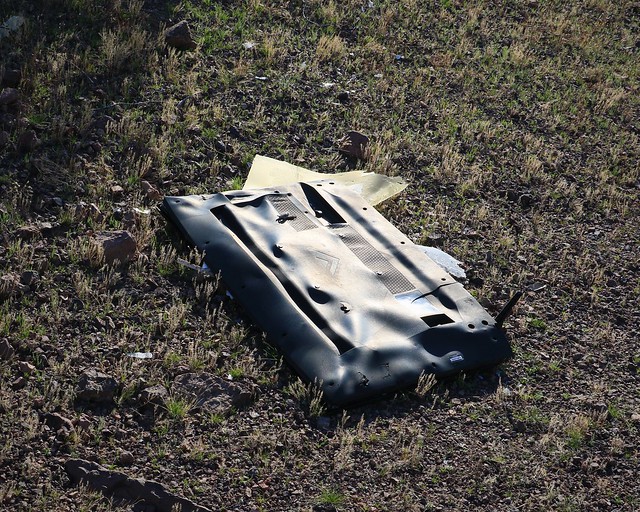 There is a lot of crazy shit people throw out in the desert. Like this flat screen TV. Now, it is not like it is just off the road, where someone threw it out of the back of a pickup. No, this one is way in the middle of nowwhere. I strongly suspect some kids on a Friday night drinking binge decided to see what would happen to a flat screen panel when you throw it out of the back of a buggy, because that is the only thing I can think of that could have carried the TV, and gotten to the place this thing was at. 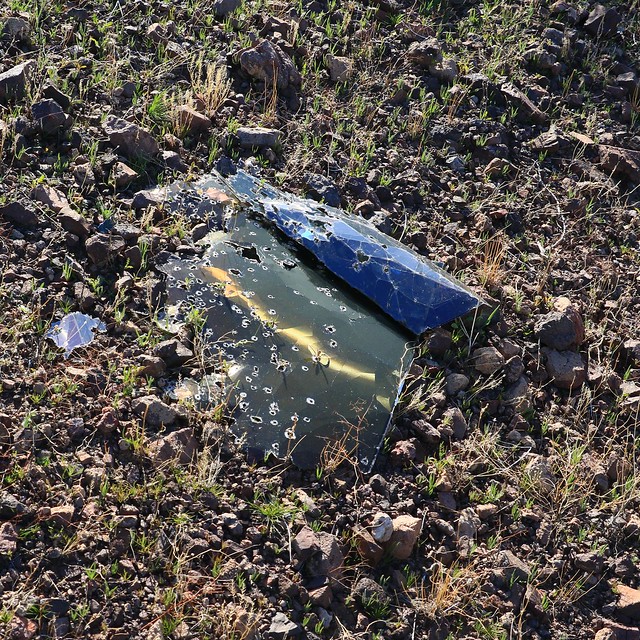 Here we have the screen. Looks like it might have been shot up with small calibre ammo, in typical American style before it was thrown from the buggy. I shake my head and continue on. 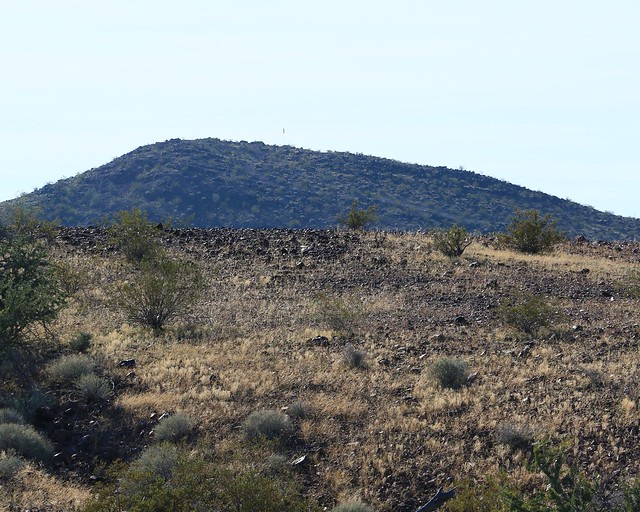 I see my destination ahead, mystery pole still too unclear to disern. I will find out soon enough. I’m approaching from the right side (of the picture) to get an easy hike up. 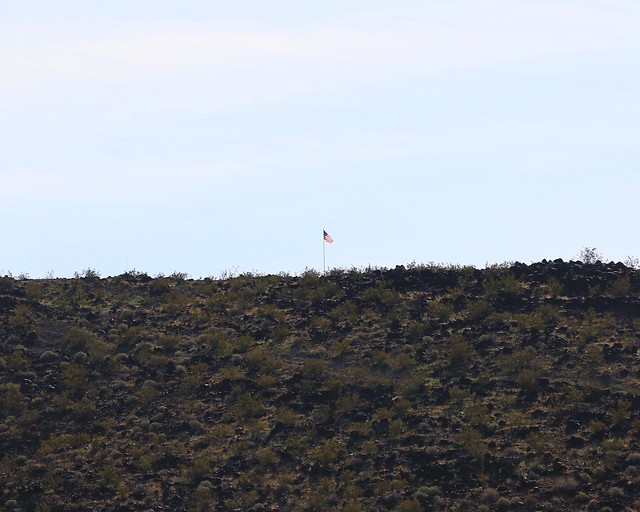 Finally, I get close enough to see what it is. Of course, it’s an American Flag. Americans like to fly their flag everywhere. 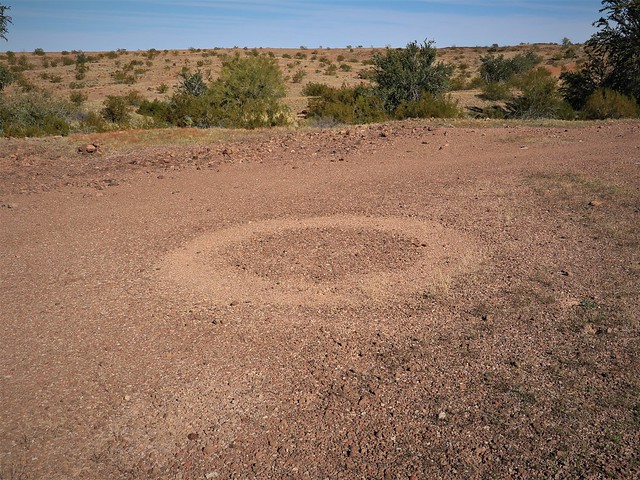 You run across little mystries in the desert every once in a while, like this circle. It looks like the kind of circle an ATV would leave spinning a donut. But it’s too neat. Plus there are no tracks around here whatsoever. Strange. 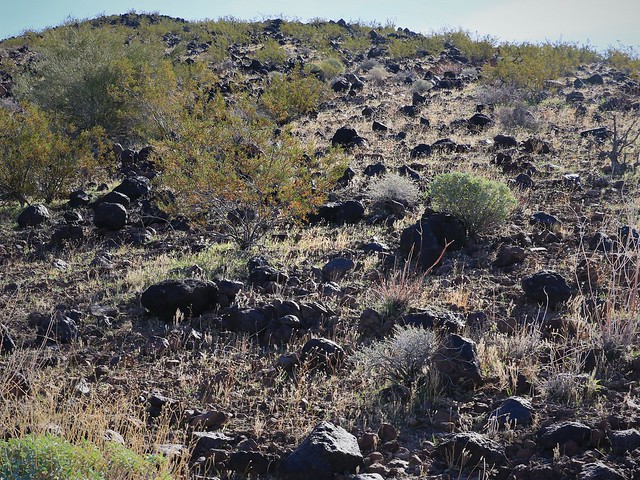 I continue on, starting to climb the actual Bouse Hill now. This is the biggest hill within site of my camp, so it is a little more of an effort to get to the top of it. But having picked the shallow sloped side, it is not hard other than having to pick over the rocks. 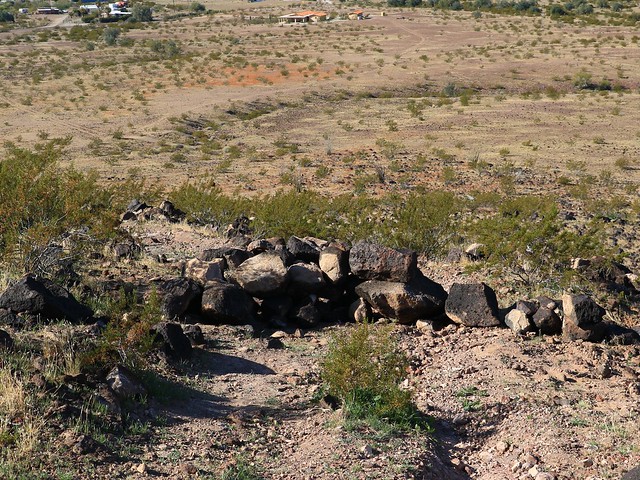 Suddenly I encounter a road, leading up the hill. I see it heads back towards Bouse. Makes sense, the locals would climb this most often. They have blocked off the track to vehicle traffic to force everyone to walk up to the top. It’s not like it’s a big chore – ten minutes of walking I would estimate, and 250 feet, assuming you start back a bit from the blockage. 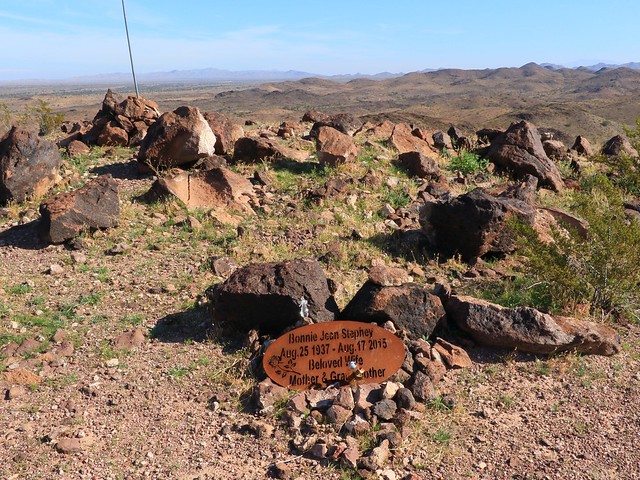 I arrive at the top and the first thing I notice is this grave marker, or just a marker of a person passed on from life. 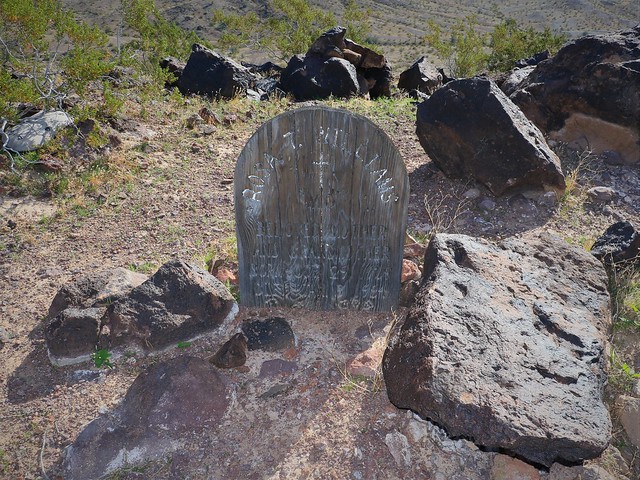 Then I notice another grave marker. And another. It would seem the locals here have carried the ashes of their loved ones up here to mark a favorite place they enjoyed while alive. I can empathize with that. 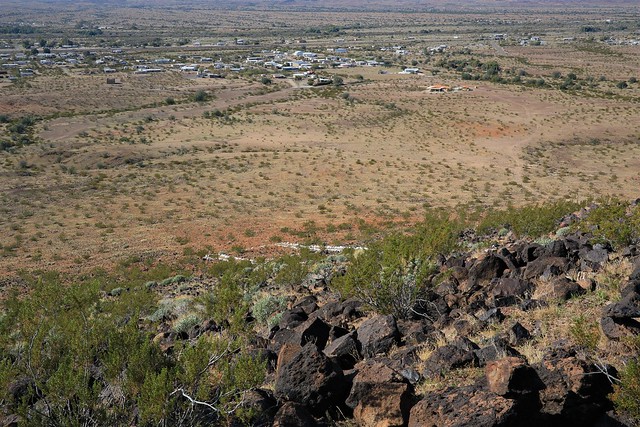 The view is indeed one to enjoy. It’s not the highest peak I have climbed by far, but it is a nice view to Bouse, and you see all the surrounding hills nicely from up here. The white rocks you can just see below a bit to the left is the Bouse “B” which actually looks like a “B” when viewed from the highway that passes through town. 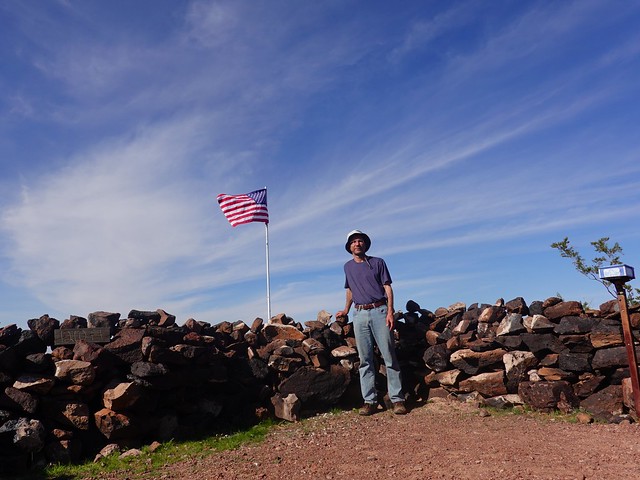 I take the time to mark the occasion with a self portrait. The little box on the pole contained a journal to sign, kind of like a geocache. I take out Pam’s pen and sign it “Ralph and Pam, January 17th, 2020” Now she is memorialized up here too, like the others. I’m sure she would have liked the view too.

I look over all the work that has been done up here. Not to mention the flag, there are benches, a wind break, a journal to sign, and markers of various sorts. It obviously is a special place to the people that come up here. But it is time for me to go. I take one last look, then tromp back down the trail, turning off at the bottom of the hill to go overland again back to the campsite. 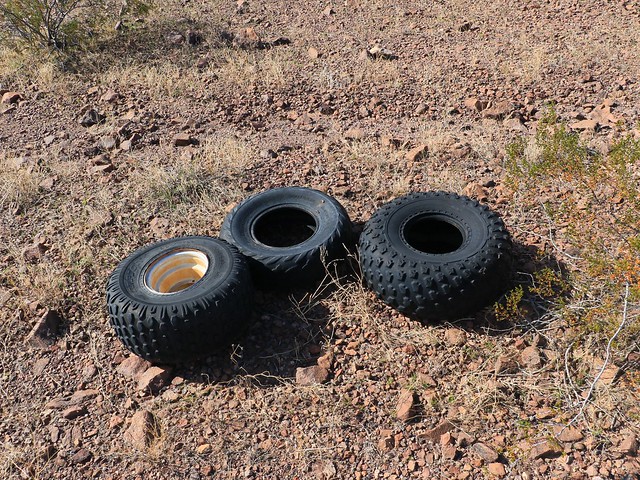 There is yet more peculiar stuff left in the desert, like quad tires. They look good to me, almost looks like a cache of tires rather than a dump. But why one with a rim, and one without? Why one different tread (and type?). Why only three, not four? I have no answers, the desert does not answer for me either. 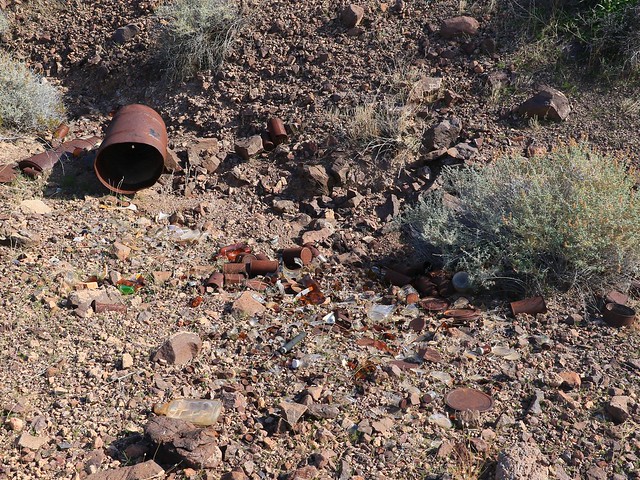 This kind of garbage I can understand better. You see it pretty much anywhere you find old camps. Just look for a ditch or gully nearby, and you will likely find old garbage in it. I read later that the BLM would rather you NOT disturb the old garbage piles; they are old in some cases to the point of being of archaeological value; insight into the behavior of the times. Go figure. 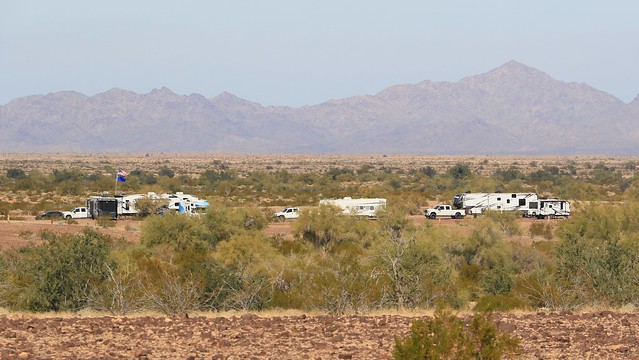 I return to camp to see a few more RVs and their 4×4 toys have shown up. It is Friday, and the Parker 425 is coming up next weekend. Seems people want to check out the area in advance and try out bits of the track. Or just try out the track.

I ran across one of the racers a previous day, he informed me that they were not supposed to be there beyond the official pre-race track trial run – so that no one had an advantage in terms of knowing the current track condition. So I suspect most of them were locals just coming out for some weekend 4x4ing.

I do have to say while I found it annoying to have a bunch of people camped next to us making noise, it is their local area, not ours – we are the ones crashing the party so to speak. Also, these people were quite quiet (as much as 4x4ers can be) and didn’t make noise late into the night. Helped that they had younger kids, that puts a damper on the party spirit for sure. 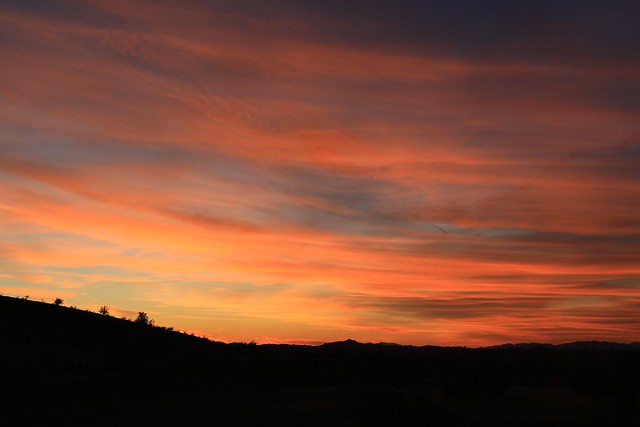 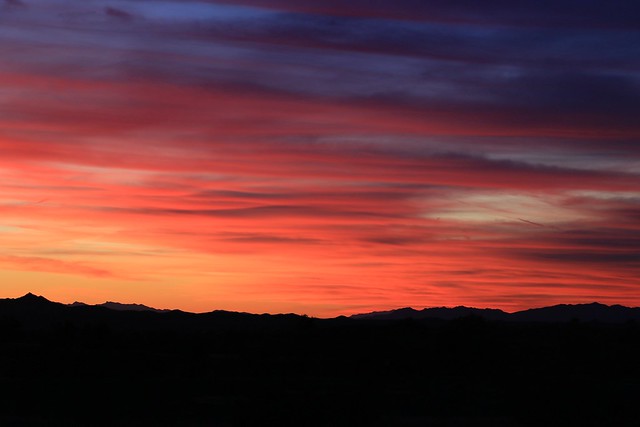 But another great sunset makes up for any annoyances with other people camping nearby. Certainly a great one to cap off a nice day!

Just another blog to share some thoughts with the world.
View all posts by ralph →
This entry was posted in hike, pictures, travel and tagged RV desert travel. Bookmark the permalink.