The Mines of Bouse

It occurred to me that I could use some topographical maps to see what kind of things of interest were in the area, and how I might get to them by foot. There is an app for that.

I already had “Canada Maps” installed, an Android application that made available most every topographic map I’ve ever needed to explore the countryside around me, in Canada. But what about in the USA? The Big G’s Play Store found for me very quickly “US Topo Maps”, the same idea but for the USA. The free version has scans of all of the old paper series of maps; which is what I was interested in as they showed all the old cart tracks, mines, towns and structures I might be able to hike to and see the ruins of. These maps can be quite out of date for less populated areas, like, 50 years out of date. They are fine for showing old stuff, which is most of what you are looking for anyways. It even is geo-referenced, and will show you your location and tracks on the topo maps. The free version has many other layers, including more recent digital topo map layers. What the paid version gets you is even more map layers and unlimited way point and tracking abilities – the free version is limited to saving 3 tracks and 3 way points. For $17 (currently) it’s a deal – no buying paper maps, other than perhaps “mission critical” maps as a backup if your phone dies.

So, checking out the area around Bouse, I see there are several mines and many “prospects” in the area. The “Barber Gene Mine” is the closest, with another mine at the end of the road I want to go down. 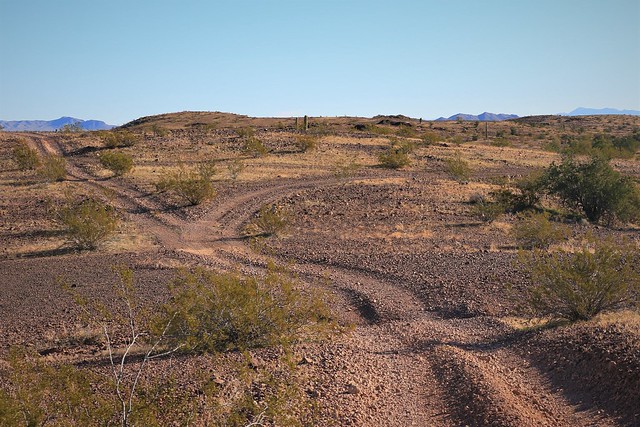 I come to the split in the road exactly as my app shows I would – I walked cross country from camp pretty much right to the road split to save some time. Walking off trail here is still pretty easy despite the hilly terrain. Down the right fork I go, heading past a sign, of what I don’t know as the backing is all that remains of the sign. Consulting my topo app, I see I have the Barber Gene Mine right ahead of me, this must have been a sign warning of that. 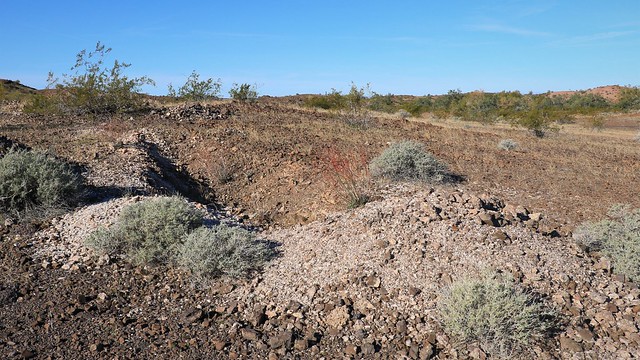 I walk a bit further, and see a pit, with white rocks in the piles surrounding it. I find out later that the white rocks are barite. Walking around more, I see there are several pits, with varying amounts of the white rock. 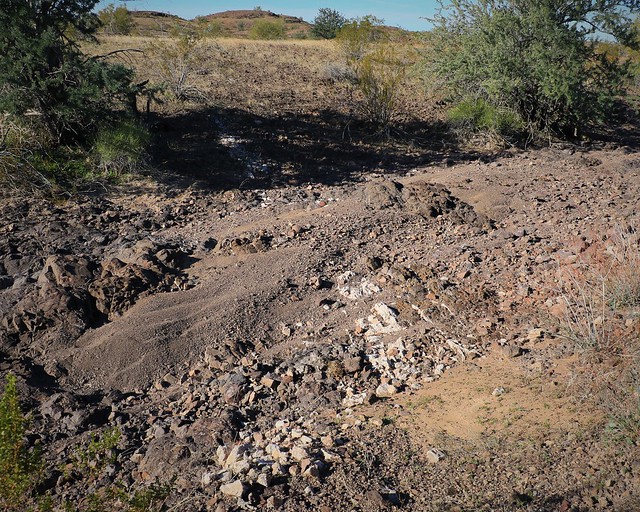 I find a small gully, in which I see the vein running east-west right at the surface obvious by the white rocks scattered about anywhere there is erosion, and left clear from the water erosion in the gully. 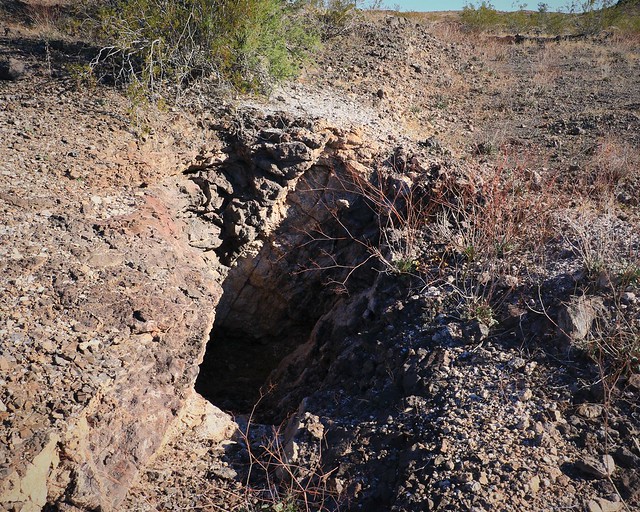 Near it, I find something that would be close to a shaft rather than a pit, going down perhaps ten feet – you can see the bottom here still in this picture. It is the largest excavation in the area, but it is all very small. Hard to believe such things were ever viable at all, but then again, perhaps they were not viable, thus they were never dug out beyond the initial exploratory digs. Having explored all the pits around the Barber Gene Mine, I proceed to follow the road west to the next unnamed mine, located on a small hill a quarter mile west of me down the cart path I have been following. 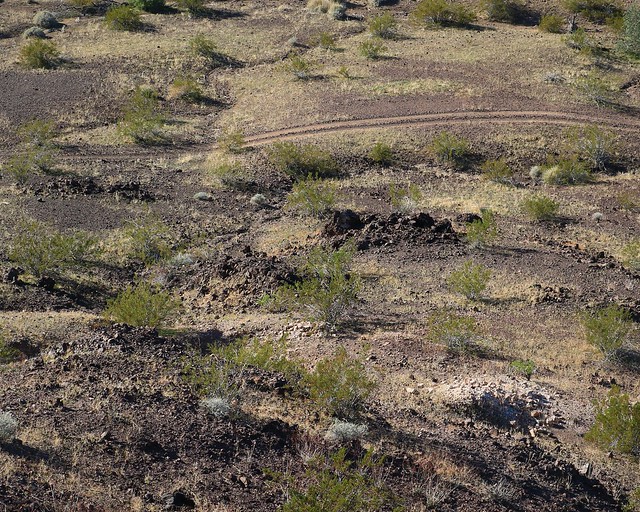 I see small pits scattered about this hill with the same white rocks. Pawing among them, I find a bit of clear greenish crystal, from my best guess is fluorite, nice but not really worth anything. 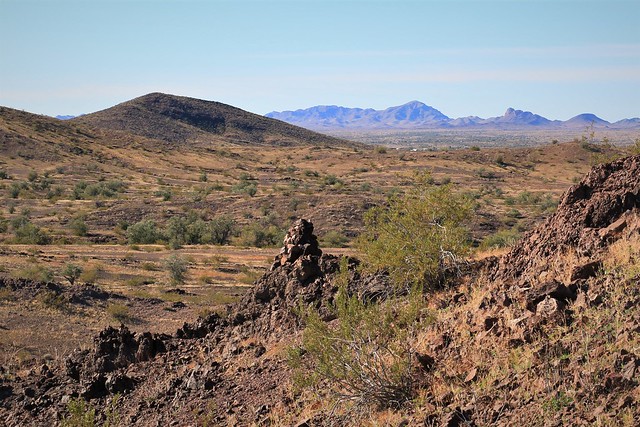 Walking around the hill, I find a cairn marking, something. Dunno what, there didn’t seem to be anything obvious. Dig here next time? Kilroy was here? Here is where the pile of rocks is? But there is a view back to Bouse from there, perhaps someone in Bouse can see the cairn as a reminder that they need to go back to this little hill. 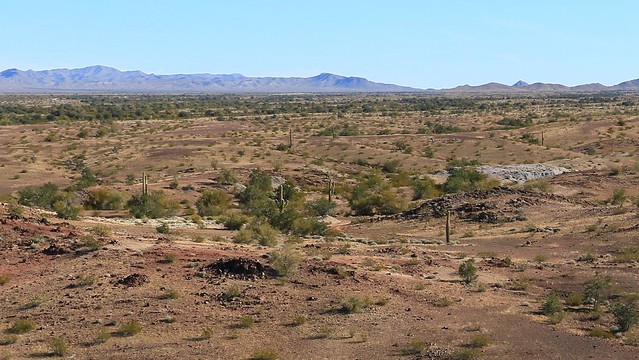 Turning to face away from Bouse, I see two more scars on the land that look like quarries. One on the left is a yellowy color, the one on the right looks limestone grey. I’m guessing it is a former limestone quarry, but that is the limit of my identification skills. Even though I’m getting a little long on time for a morning walk, I decide to check out these two mines. 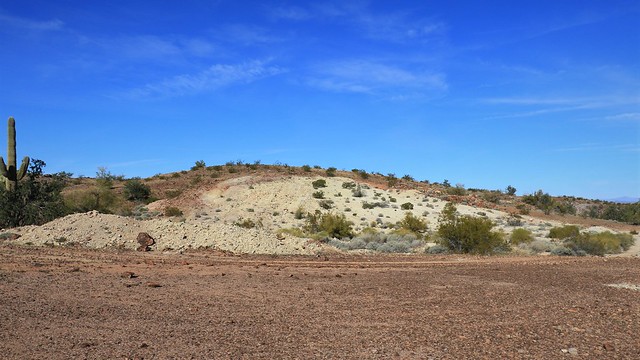 Walking over to the the closer yellow quarry, I see the mining is of a little larger scale, a quarter hectare perhaps. Still tiny by modern standards. I have no idea what the yellow rock is; it’s not particular pretty at any rate. 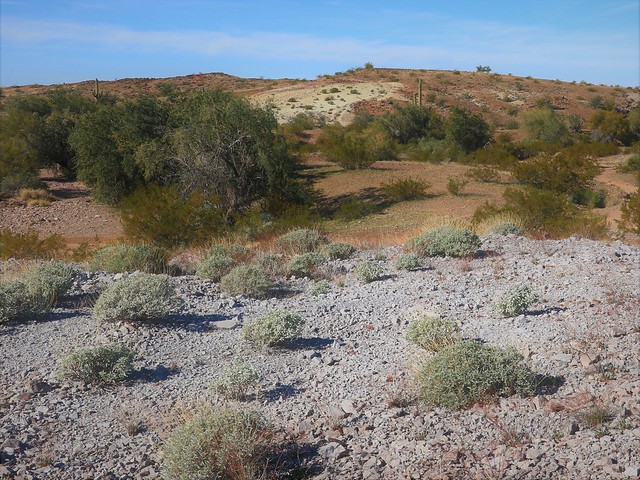 It is only a little further over to the the grey rocks, but I end up missing them and backtracking. The track drops down just enough so I walked by below the disturbed rock. I only see them as I pass the last of them, as I look back the way I came as I’m thinking I’ve gone too far. Goes to show you, the desert hills can hide a lot more than you think. While every other mine I’ve encountered so far looks like it was left pretty much as is after they were done mining, the grey “limestone” looks like there had been some attempt to scrape things up and clean up a bit, at least there is no left over quarry wall here, just piles of rock. It would be interesting to see what the age is of these mines, I would guess the yellow and grey quarries to be newer, with some of the little pits going back probably to the early prospectors in the early 1900s. 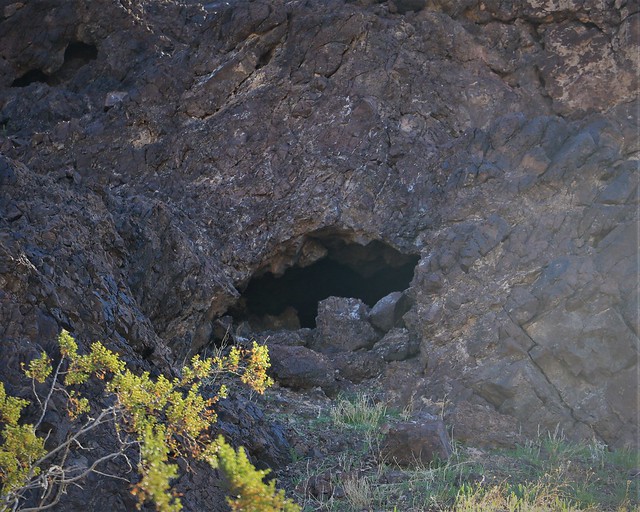 I head back, a little later than intended, but I’m not on a schedule, so whatever. I decide to head around the south side of the little hill with the second unnamed mine. Looking up, I see a cave. It’s not a long climb, so I start up. But the scree is particularly bad – not enough to dig into, but too much to get a firm footing. Looking up at the cave, I see it’s a little small to climb in, I’d have been on all fours going in, and it is clearly a cave, not a mine. I content myself with a picture and scurry back down, not wanting to risk a fall for a little cave I wasn’t likely to go in anyways. 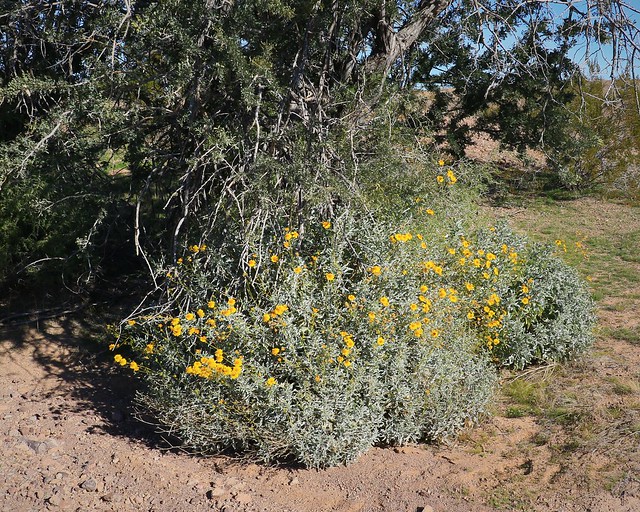 I have been seeing the occasional flower out in the winter desert, this shrub was particularly nice sheltered under a tree. While there are not a lot of flowers blooming this time of year, a few do exist if you want to try to capture photos of those. 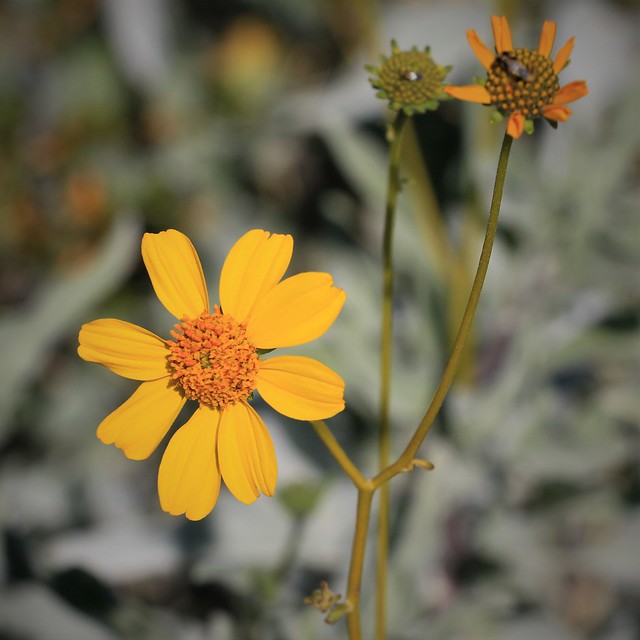 I select a particularly nice flower for a macro shot. The bloom is a bit bigger than a quarter in size, not so difficult to shoot – other than the breeze moving the flower around. I’ll have to get an ID on this thing at some point though. 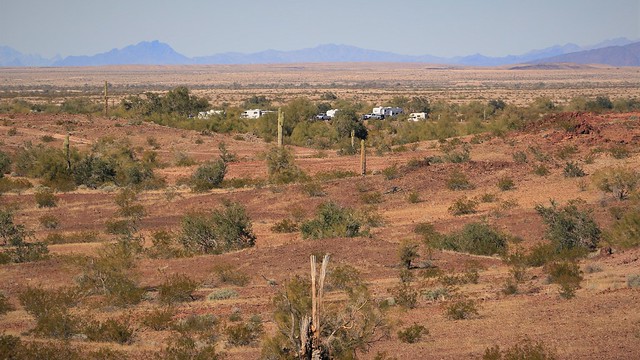 But it is time to get back to camp – check in with work, do some blogging, and prepare for the evening meal around the fire. But I resolve to go back and check out the left fork of the mine road. I need to see what a “retort oven” is.

Just another blog to share some thoughts with the world.
View all posts by ralph →
This entry was posted in Computers, hike, pictures, travel and tagged RV desert travel. Bookmark the permalink.