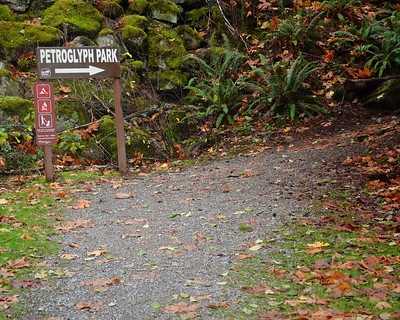 While staying at Living Forest Campground, I happened to be walking distance from Petroglyph Provincial Park, a small site featuring petroglyphs carved in sandstone. I can walk to both a provincial park and a grocery store from my campsite, how great is that?
The walk over reveals a standard problem I’ve seen in a lot of developed areas – incomplete connections for walking paths. The walk up the road from the campground is along the side of a narrow two lane road – you need to keep an eye open for vehicles that can’t or won’t pull over for you. You graduate to a gravel, then paved side walk before coming to the main road, which just happens to be the Trans Canada Highway through here. A nice bicycle path goes up the road north for all of two blocks, dumping you in front of a fancy restaurant. You are wise at this point to continue up the side road that parallels the main highway, but are again forced over onto the highway after the next intersection. The next half a kilometer is an unpleasant walk along the side of a highspeed roadway, trucks and cars roaring past. At least there is a shoulder, and you can kinda walk along a dirt path trod into the ground just off the road. Not exactly an environment encouraging to anything other than cars.

But I arrive at the park only a bit deafened. The park is surrounded by development, yet all access is cut off except for along the highway. NIMBYism at its worst. But the trail in the park immediately sooths with the greenery of the trees and the moss.

You arrive at the interpretive area first, with signs and casts arranged in a circle, and some outside the circle like the flounder pictured. I give it only a quick look – I want to go see the real things.

But first you encounter some flat rocks that have been scratched all over with more recent markings. This one here looks old; even the look is of something that might have been drawn early in the 20th century. But I wonder if faint petroglyphs have been obscured by the more recent defacement.

I get to the actual petroglyphs a moment later. This is not a big park, your walking time is around five minutes from parking lot to actual petroglyphs. I immediately see the flounder close to the edge of the grouping. Good thing the park has fenced off the petroglyphs, it would be easy to walk over them otherwise.

Stepping back to take in the whole collection I can see it is just packed with drawings in a space around 10 square meters I’d say. The leaves and bits of vegetation covering some of the carving is annoying, but you can’t expect these to be cleaned off all the time. A mid summer’s viewing might be better for obstruction free viewing.

I try some different angles to get the best reflections to contrast the lines. There is a lot to see in this little space.

My attention is drawn to what the interpretive signs say are “sea wolf” drawings, a mythical beast literally part wolf, part seal, or some such sea swimming creature. Imagine the horror film you could get out of something like this crawling out of the ocean at night to snatch unwary beach campers in their sleep. Spielberg, call me.

Having seen all there was to see at the park, I head back down the noisy highway, photographing this one red tree sitting in a JW parking lot. Evidently, the end of the world has been pushed back long enough that it’s worth them planting trees in their church parking lots now.

Just another blog to share some thoughts with the world.
View all posts by ralph →
This entry was posted in hike, pictures, review, travel. Bookmark the permalink.