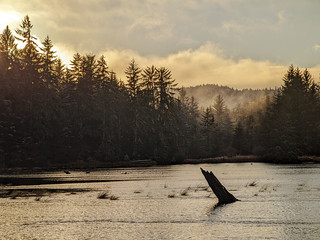 Cluxewe Resort was my home for two weeks as I hunkered down in some of the most brutal winter weather that Vancouver Island had seen in recent times. While it was snowy and cold, there were times the sun came out a bit. Being outside wasn’t that bad, even if there was no sun. So I managed to explore all around the campground and beyond where I could reasonably walk to.

I have already discussed the campground itself in a previous post, so this will focus mostly on the scenery to be seen in and around the campground. My stay was extended from one to two weeks, as I did not feel like dealing with super cold while out boondocking. Good thing I stayed an extra week, as the last post goes into great detail, I had several freezing issues to deal with that were just easier with power at hand. 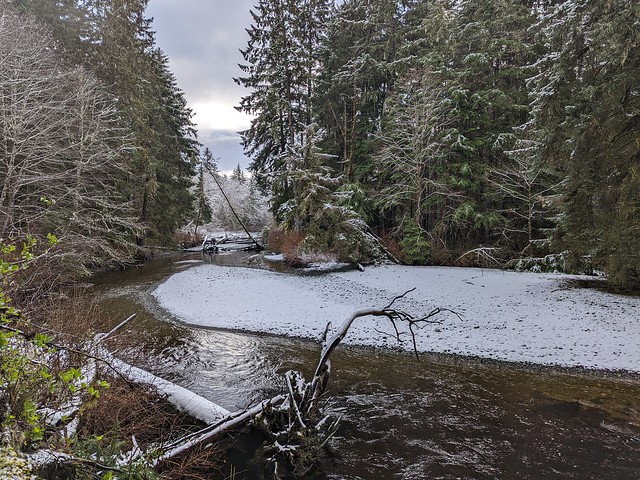 Cluxewe River seen from the trail

The river that empties into the Estuary has a trail to it from the campsite. It is a short walk, but pretty with the river and mature second growth forest. 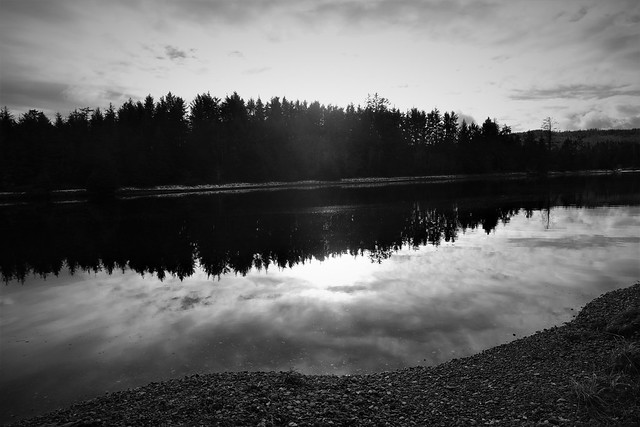 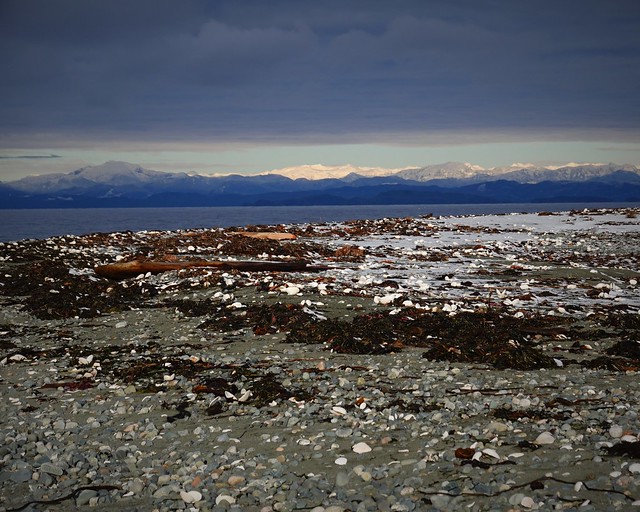 Estuary Debris, at the very tip of the peninsula at low tide 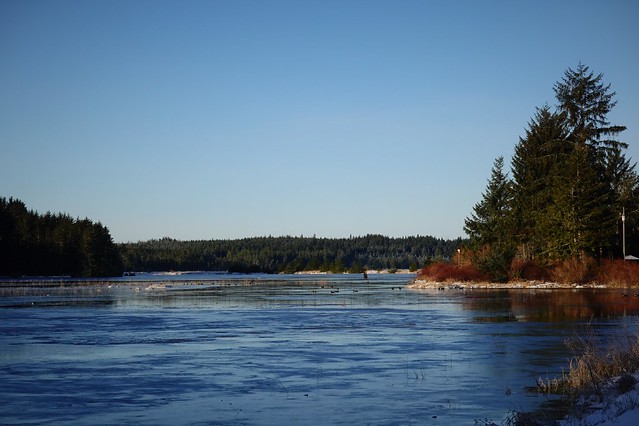 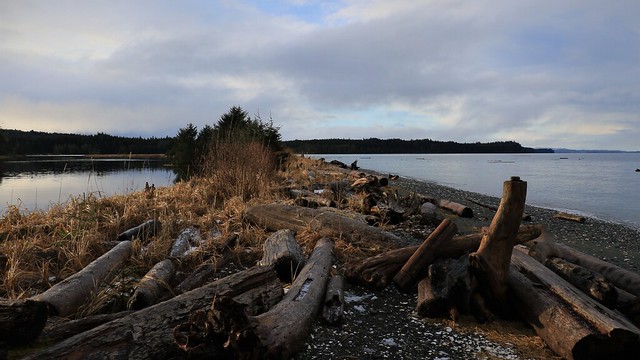 Estuary on the left, ocean on the right 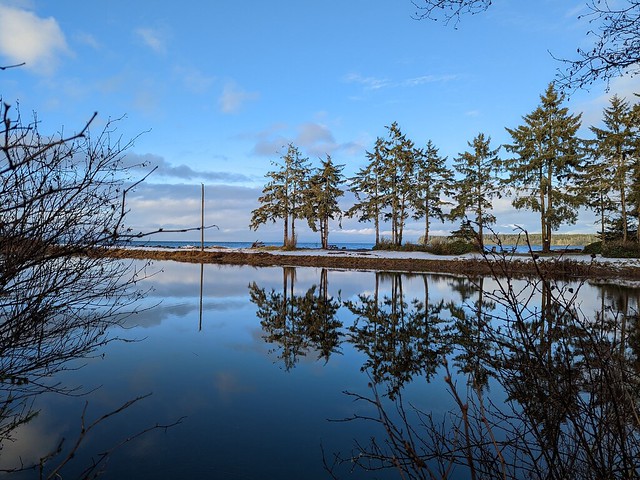 The estuary the campground is against provided some amazing scenery photo opportunities, as you can see. The peninsula you walk down goes quite a long ways, giving you plenty of opportunities to photograph. I recommend going at least once during low tide, and once near (but not at) high tide. The look of the area is very different between the two. High tide is difficult to walk along the shore, so a high tide walk is best just as the tide starts going down enough to walk along the top part of the beach. 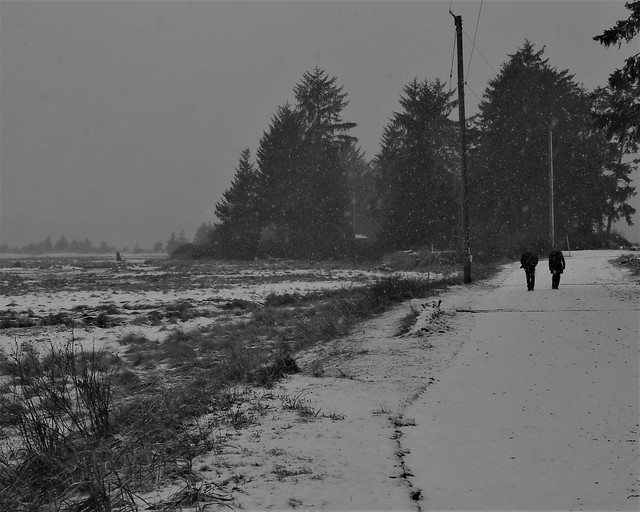 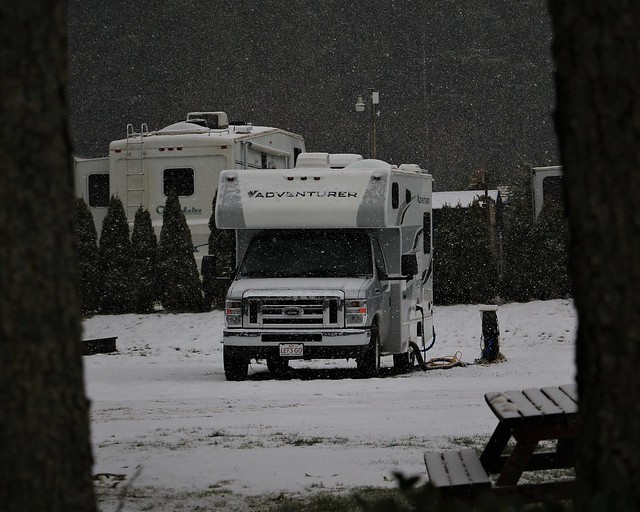 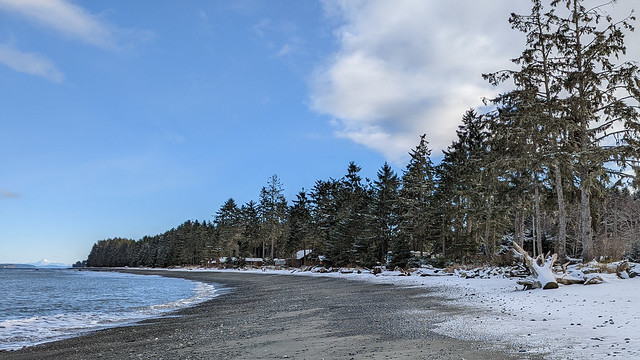 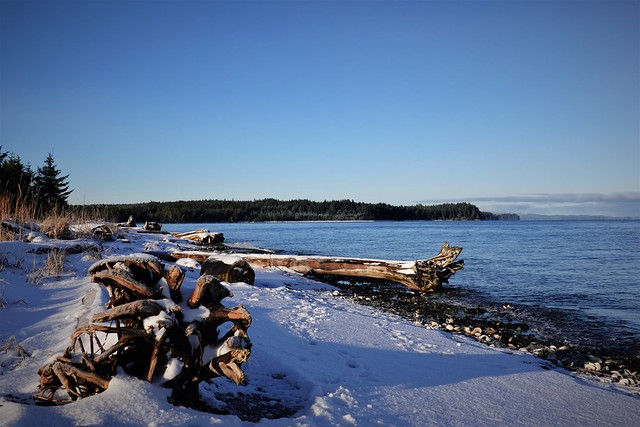 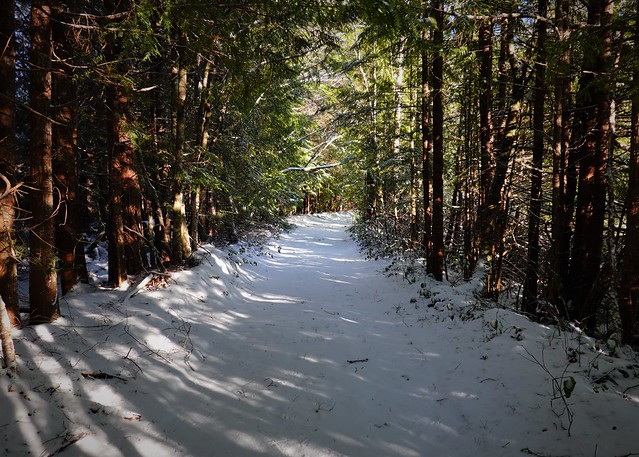 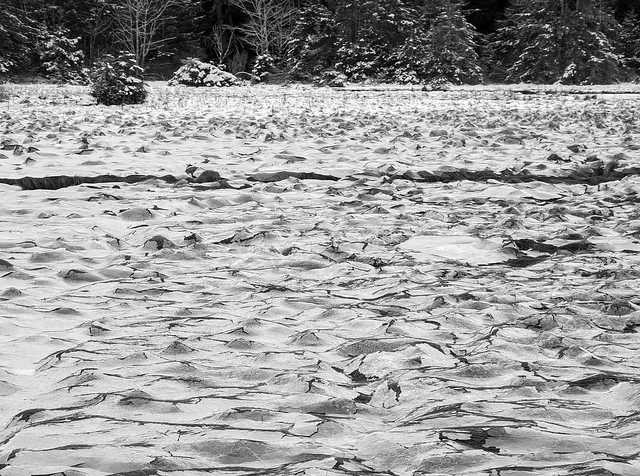 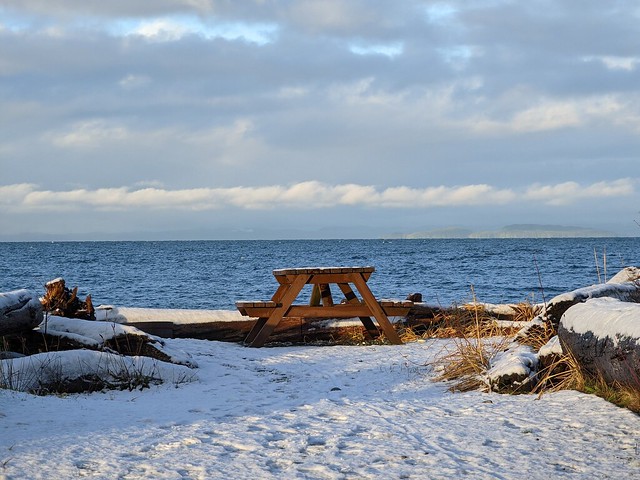 Snowy picnic spot on the ocean 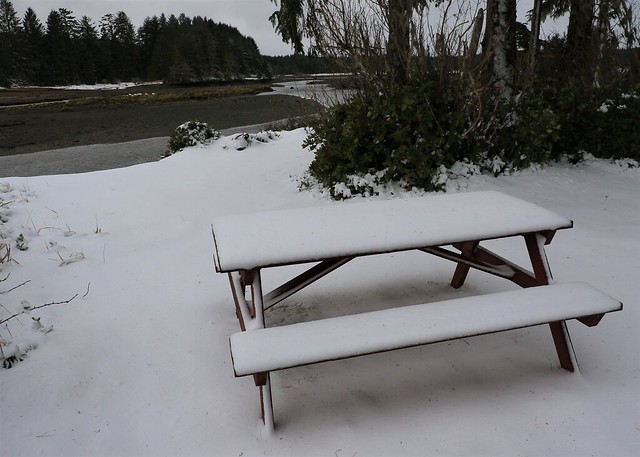 Then, yet more snow fell

Over my two weeks at Cluxewe, it snowed, and it was cold a lot of the time. All the locals tell me this amount of cold and snow for this long is very unusual. While I’d rather be photographing sandy shores and leafy greens, I had snow instead. At least I can say I got photographic evidence of something unusual on the North Vancouver coast. I can also say I was able to hack the worst that Vancouver Island threw at me. Would I have wanted to be boondocking during this time? Not really – I appreciated very much having an electric heater under my feet at all times during the blowy cold. 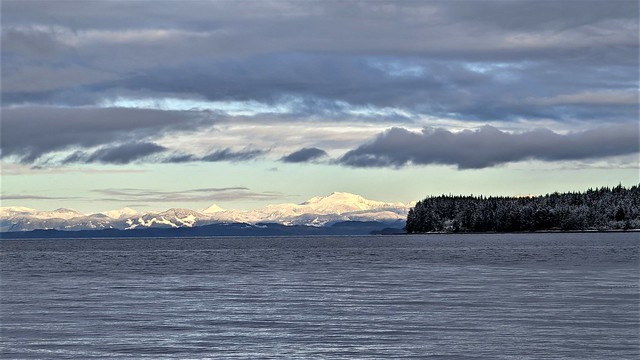 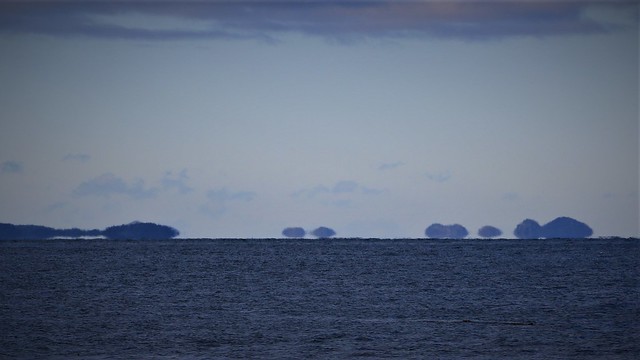 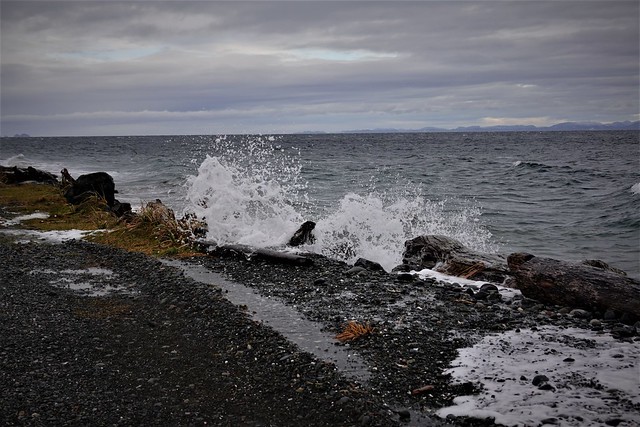 The ocean side of the peninsula was very nice too. At least I was not always looking at snow with the water washing some of it away at high tide. One day was particularly magical, walking along the beach after a very high tide. All sorts of sea shells had been washed ashore, and some of them were being tossed about by the mild surf of the day. The sound was wonderful, with a whooshing of waves, mixed with the tinkle of shells clattering in the water. 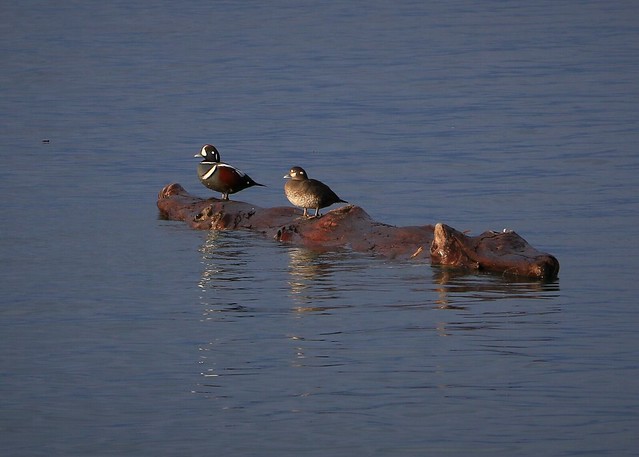 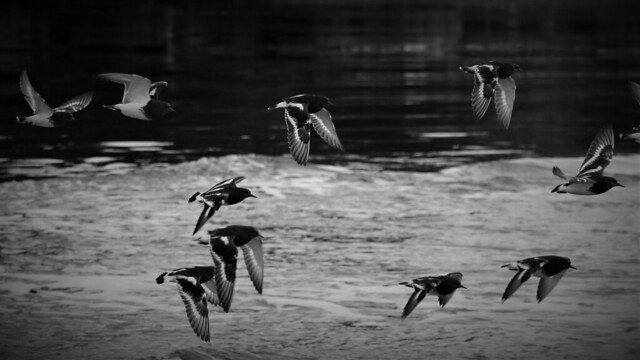 Birds take off around me 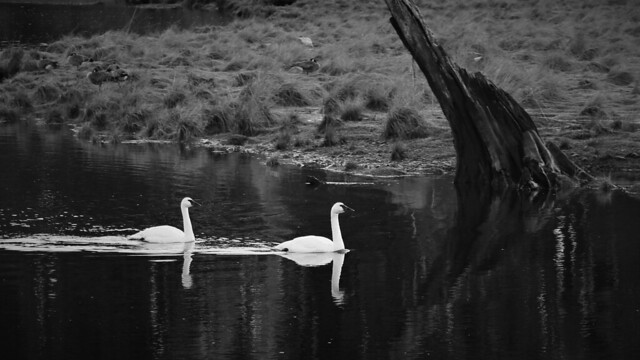 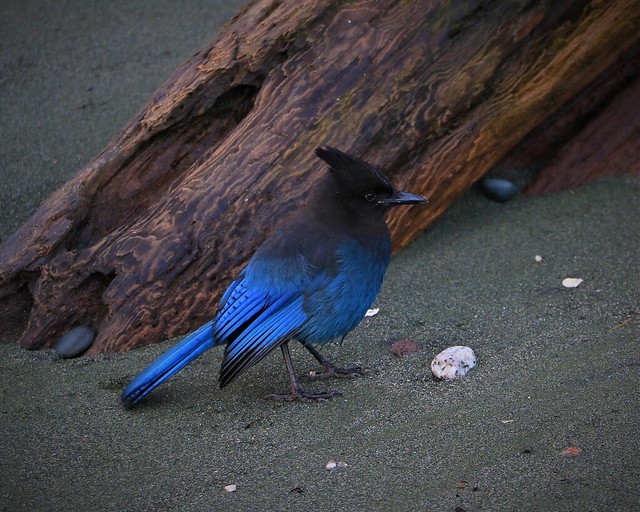 As expected near an estuary, there were birds. I even managed to get close enough to photograph some, even though I never took out my long lens. What I did get was mostly during the few bits of good weather, which I was out in as much as possible. Of course, the last good weather when there were lots of birds out I really could have used the long lens. It was too late then to think of it. The birds on the logs were mostly too far out – the one log photo here was the one set that was close enough to get a decent photo without cropping too much. 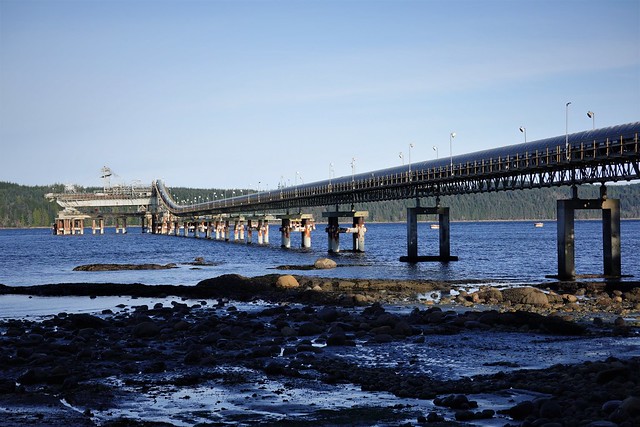 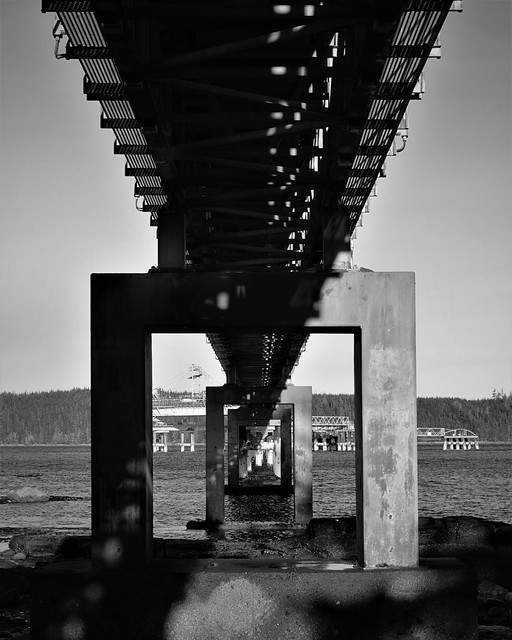 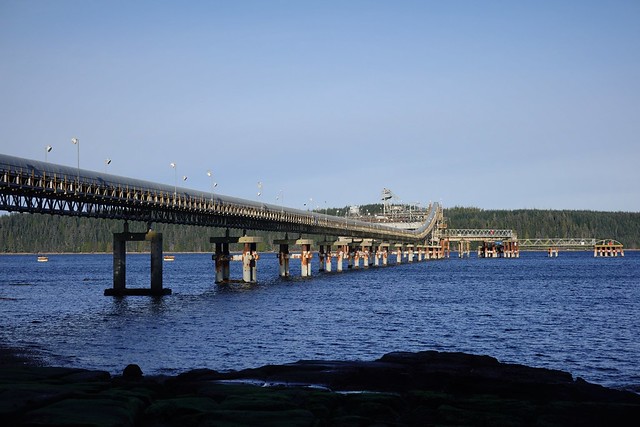 Mining is not much of an industry on North Vancouver island anymore, but there is still sand and gravel mining being done by Orca Sand and Gravel. They have built this conveyor from the mine to an ocean loading platform capable of loading an 80 million ton bulk cargo ship. It is not a tiny thing – it extends out half a kilometer to the loading platform, and travels one and a half kilometers to the actual mine. I was happy that I could walk under it on the beach and get some cool photos. 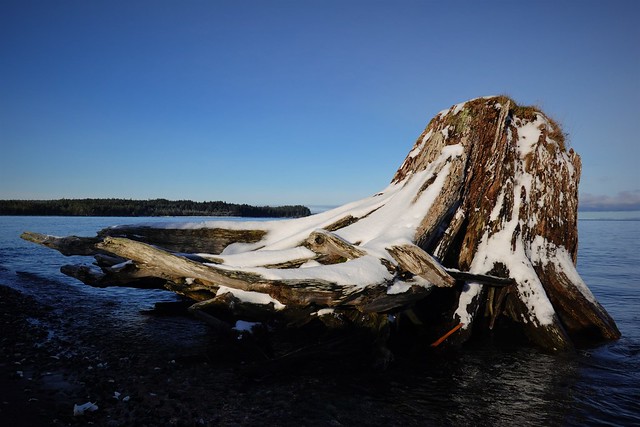 Tree Stump hangs on, even with the extra high tides 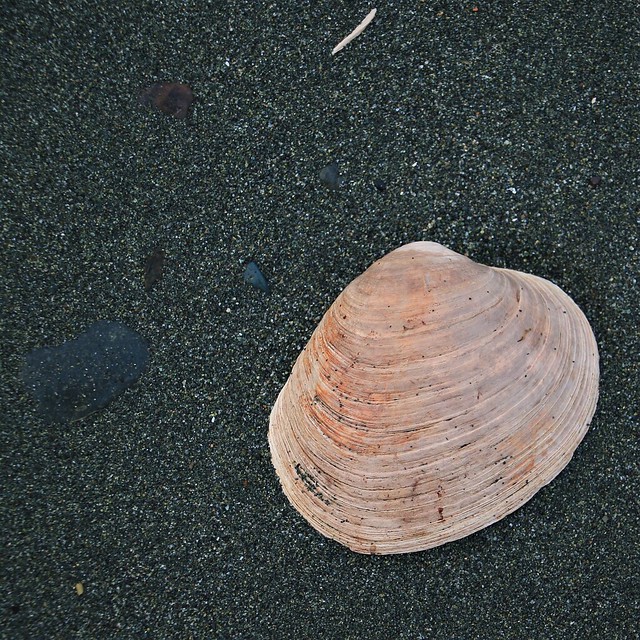 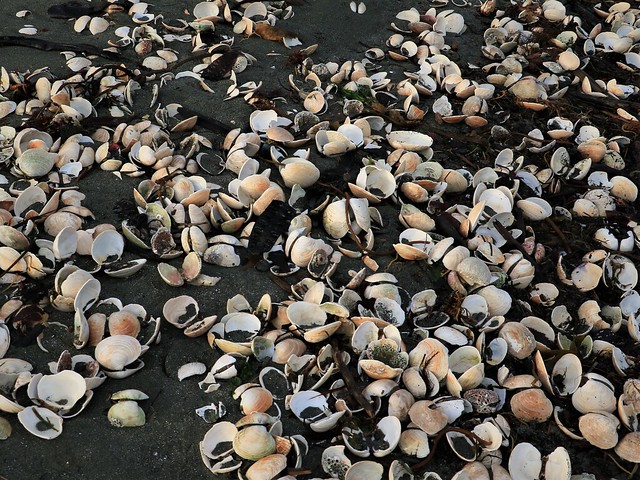 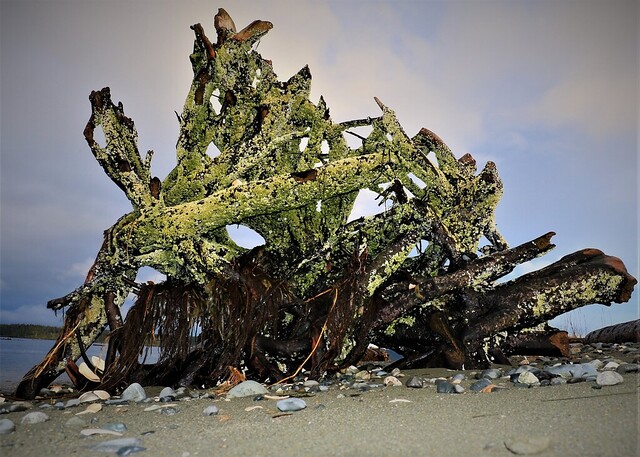 The beach yielded some other fascinating bits as well – beachcombing is a thing for a reason you know.

So while I was camped at Cluxewe for longer than I wanted, it was a pretty good spot to be stuck. But I was itching to get out. I had scouted a new spot at Rupert Inlet during my resupply run into Port McNeill. My only worry was the snow forecast of 10 – 30cm of snow. I wasn’t going anywhere if the high end of that happened. See my next posting for what unexpected adventures I got into next!

Just another blog to share some thoughts with the world.
View all posts by ralph →
This entry was posted in campground, pictures, travel. Bookmark the permalink.