A Last refuge beyond which all hope is lost

The cold and snow at Cluxewe Resort arrived with a vengeance. I was inside my RV, heater under my feet, looking out through a crack in the blinds, trying to keep all the heat I could near me.  The world had closed in, with only my little space of heat and light to huddle in while the wind howled and the snow flew outside. My RV felt like a last refuge beyond which all hope is lost. If you are looking for pretty scenery from around here, you can skip to the next post – this is all the trials and tribulations of surviving the cold in an RV.

I survived the night, awaking to a chilly but not quite frozen RV. My space heater was not quite up to the job, leaving things closer to ten rather than twenty Celsius inside. But I could always add a little heat from the propane furnace if I got too cold. I can also say that keeping the blinds down does help with retaining heat – but at a cost of seeing nothing outside. I compromised and kept one window I look out most open a crack during all but the coldest weather. When it’s blowing snow I don’t want to see outside anyways!

I had remarked to friends that my RV had survived the bitter cold without freezing any lines. I was fortunate to have running water. Most of the campground did not – many lines was frozen. My line had a little leak at the valve stem – the giant icicle coming down from the tap was evidence of that. But that little trickle of water kept my lines open. Plumping out here is not designed out here for a record low of minus 13C!

But I was mistaken thinking I had escaped the freezing line issues with warmer weather the following day. I try my kitchen hot water tap and nothing comes out. I’m not believing it could be frozen at first. After all, it is a good five degrees warmer than the previous night.  But the vagaries of wind, time and perhaps not enough open doors to let a little hot air in behind the kitchen sink did me in.

I opened things up and let it sit for a day. No improvement, in either frozen line or outside temperature. We are talking around minus five to seven during this time. At least it is only my kitchen hot water tap – the one I need least of all taps. I guess I’m going to have to get in there and start tracing lines – need to find this frozen spot and hopefully thaw it without cracking a line. 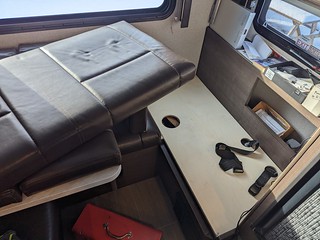 Behind this plywood on the rear driver’s side of the RV is my water pump and a mess of lines. The water tank is to the left under the back bench. I wasn’t expecting anything frozen here, but my initial inspection under the kitchen sink yielded nothing frozen, so I might as well start from the source and trace out. You’d think I’d have taken a picture before I put the cover back on, but by the time that thought occurred to me, I already had drilled the screws back in that held the cover on. I wasn’t going to reverse that for a picture that wasn’t going to show you much more than a pump and a mess of lines running from it. Also, that cover isn’t a very good fit – I struggled to get the thing back on. Perhaps in warmer weather I’ll remove it and shave it down a bit so it is a better fit. While it is cool down there, the furnace is close, next to the fridge just in the bottom right of the picture. That furnace and its lines throw off heat that warms up the space, if you use the propane furnace that is. I’m using a space heater mostly, so I have to remember to open cupboards and doors to let some of that heat into these crawl spaces. But if it gets really cold, I think you need to run your propane furnace as it is designed to heat these spaces as well as the inside you live in the RV. 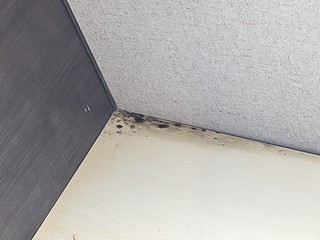 Passenger side rear plywood mold. My basement storage is right under this.

My second surprise came as I inspected the hatches – this one and the water pump cover had mold, still forming as they were both damp despite several days of warmer air plugged in at the RV campground. I’m going to have to be more generous applying heat and ventilation to keep this from happening again. The moist air, especially when cooking, hits the cold wall and condensates, with the water running down and behind the seat cushion. It is trapped down there and only dries out very slowly. If I see moisture on the walls again, I know I’m going to have to remove cushions ASAP and dry out these corners. Tearing apart your RV will yield you little tidbits like this that will help you keep things in decent shape.

But despite going over everything, I still had not found my frozen line. I was thinking that perhaps the line froze at the crossover from the drivers side to the passenger side; it has to go under the floor there and I don’t know how well that is protected from the cold. 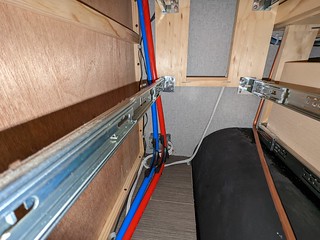 The lines drop down under the floor, just off the bottom of the picture here.

I decide to take out a drawer to look at the lines going down from the sink more closely. Nice that they give you red lines for hot water, so much easier to trace! Having the drawer out, I see two things. Daylight coming from the exterior plug – not good, that is a source of cold air for sure. I also see that the hot water line is bent behind the cold water line, and is touching the wall. Feeling along that, I finally find my frozen spot. Fortunately, it’s in the plastic line and not at a connection, so the freeze will just expand the line a bit without cracking it, most of the time. I moved the line away from the wall by just unjamming it from the cold water line – probably got that way being pushed by something at some point. I also stuffed a bunch of surplus wash cloths as insulation between the lines and the wall – those lines are definitely not going to freeze now unless it’s a lot colder!

But my frozen line woes were not completely over yet. The next day dawned at almost a normal temperature for around here, just below freezing. I go to use the toilet and find I have no water. WTF, I think there must be a frozen line outside, perhaps my heated hose shut off? Sure enough, my water pump works and all lines inside the RV are running.

After breakfast, I deal with this issue. I see my heated hose is still working. Unscrewing it from the connection at the RV I see that there is still water coming out that end. Hmmm. It seems unlikely at this temperature (-1C), but perhaps the connection from outside to inside has frozen? Knowing from yesterday that my furnace will heat up that compartment, I turn it up and head out for a walk. hoping by the time I get back my guess as to the fix will be proven correct.

Fortunately, I turned out to be right this time. Everything is working again when I return, so there must have been an overnight freeze in that line. I can’t really throw heat at that section with my space heater – it’s at the top of that first picture of my water pump cover. I’ll just have to run the furnace once in a while to keep that area above freezing. Eventually I’m getting one of those 250w heaters to throw down there so when I’m plugged in I don’t have these issues.

Now you’d think I was done with freezing issues, but no, we still have the septic system to deal with (cue ominous music) ! The cold just wouldn’t quit over the holidays. I was in need of re-supply between Xmas and New Years, so I thought that minus 4 during the day might be good enough to dump my tanks. No. Not even close. I applied a hair drier under the valves, which were frozen closed. Don’t even think of leaving them open, you will have a massive poopsicle in your stinky slinky! The hair drier did warm things up, but my valves are enclosed, so I can’t heat them directly. That enclosure is supposed to keep them from freezing too, but no, we can’t dump in minus 4 even. After an hour of hair drier, I manage to get the black tank open. Good thing, as I’d committed fully to that one, filling it to the brim to give it a good flush. My grey tank just would not release, so I give up and head into town for resupply.

I’m not too worried at this point – my goal had been to dump so I wasn’t driving around with full tanks for my resupply. But the forecast was for a balmy 4 degrees ABOVE freezing for the following day – there was no problem opening the tanks then. So, now we are done with the tail of the surviving the RV freeze.

Full timers will do things like put skirting around their RV when parked, with a little heater thrown under for good measure, to prevent most of my issues. But I’m just parked, not going to deal with skirting for the few times I intend to be plugged in for extended periods. I just need to be less stingy with the heat inside the RV, and choose above freezing days for my dumping and I should be good, in my “four season” RV. At least I can hope my last refuge will remain unfrozen, should I have to deal with this cold again.

Just another blog to share some thoughts with the world.
View all posts by ralph →
This entry was posted in campground, RV, RV how to, travel. Bookmark the permalink.