Hunkering down for the winter I was trying to avoid 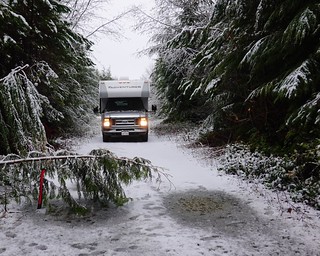 My first boondocking spot had been a great success. The snow had even mostly melted, leaving me hoping I could avoid further winter woes, but it was not to be. My shaky internet signal downloaded a forecast of snow and brutal cold, at least brutal for these parts. I left my spot as the first new snow was falling – having a few hanging trees to deal with on the way out from the weighty wet snow.

The forecast  was for a low of minus 13, a full six degrees Celsius colder than the previous record low. So it was going to be snowy and cold enough to be approaching all time record lows. Just what I didn’t want this first year trying to avoid the winter in Canada. To prepare for this event, I decided it was going to be much more comfortable to be glamping – so full hookups at Cluxewe Resort were purchased for the next week!

Cluxewe is run by natives on their reserve of the same name. Looking at a map and see “Klickseewy“? Well, Paula the campground host assured me that was a colonial misspelling; stuck on them now like many immigrant names in North America where the registering agent just put in whatever phonetic spelling seemed reasonable. 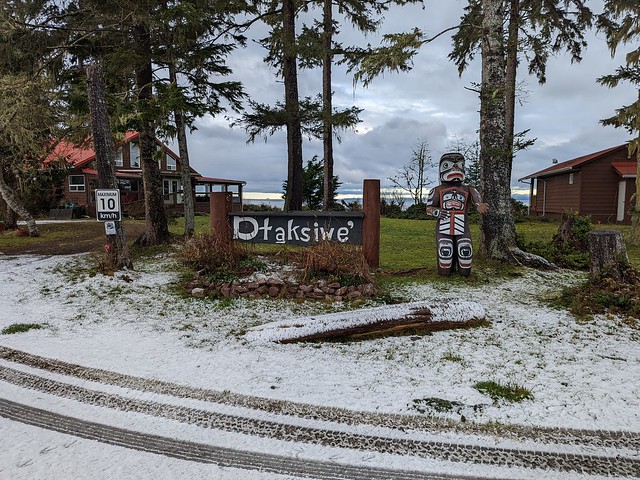 The campground is pretty big – over a hundred sites, but most are not available right now. The west area of the campground is on a peninsula created by the Cluxewe Estuary. It’s all closed right now, which makes some sense as it is out a ways from the office. There are only permanent residents and a few campers right now, so the cluster of camping spots east of the office are kept open for the winter. 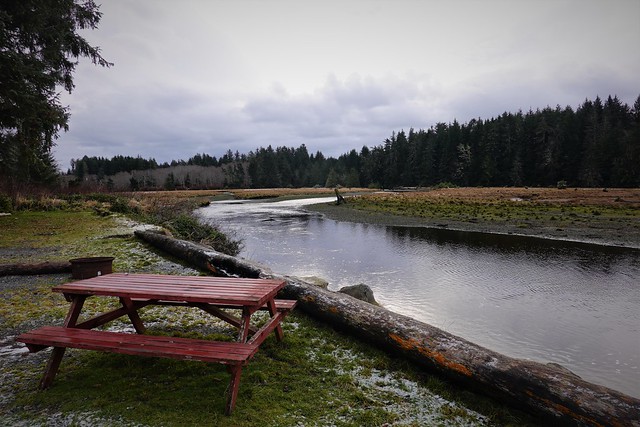 The spots out on the peninsula look really nice – you have your choice of treed spots, or views of the estuary or ocean. The sites on the narrow part of the peninsula have both views, although you will have to also contend with the access road going right by your site. 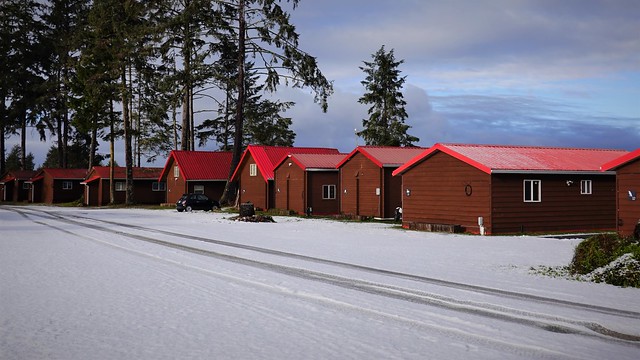 Cabins after some more snow had fallen 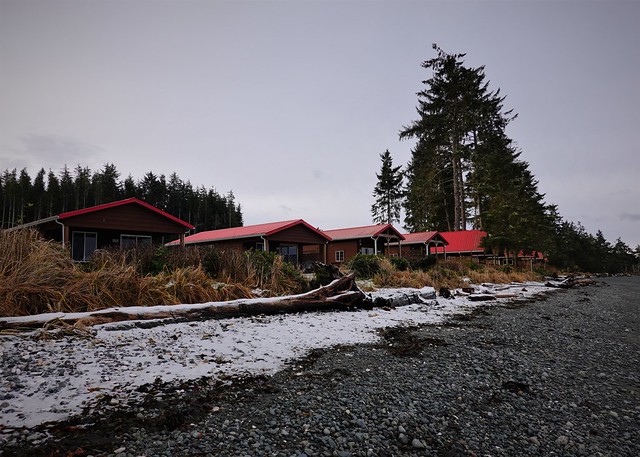 Cabins can be had in the east area I was camping in. Most cabins overlook the ocean. There is some demand for these, I would estimate over half were booked over the holidays. The one downside that definitely takes one star off the googles review is that the water is currently non-potable. High magnesium I was told is the reason. So, no problem if you drink a little with your tooth brushing, but you need bottled water for your proper water consumption needs. I’d also say the iron is quite high based on the rust colored water that periodically comes out. Sometimes it’s clear, sometimes it’s rusty. All in all, a good clue you might not want to drink the stuff. I can say it’s perfectly fine to wash and shower with – no skin issues whatsoever. 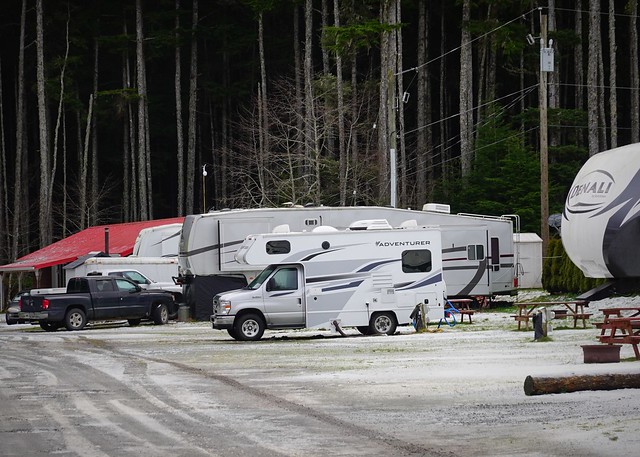 As usual, I am dwarfed by the bigger rigs

The spot I’m in is at the end of the lake front cabins. It is open right now, but in the summer people are packed in here, like most campgrounds. At least there is a little juniper hedge break between me and the sites behind me. The junipers are just getting big enough now to start providing a visual screen between you and the permanent campers all in the loop to the south of me.

As far as the facilities go – I have visited the main washroom / shower area open in the winter. It looks all clean and functional. Showers are your standard $1 for 5 minutes thing. The laundry is standard – currently(Dec ’21) $2 per load, and same for drying, except one machine that remains a bargain at $1.25. But it doesn’t stay on quite long enough to dry a full load. Sigh.  There are a bunch of playground structures scattered about, lots of structures for the kids to explore. If you don’t want kid noise, where I am camped has potential as it is farthest from the playground stuff. 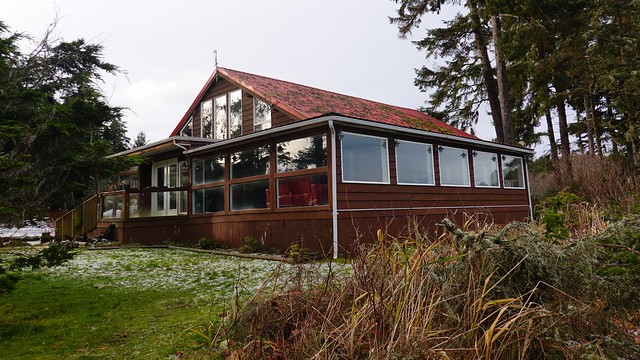 As far as other facilities, there is a bistro, closed due to COVID. Too bad, as I’d have definitely checked that out! There is a boat ramp that could handle any sized boat. There is no shelter there, so the ocean can pound away pretty good there. Fish cleaning stations are also around. According to Paula, they do catch fish from the shore there at certain times of the year. Also there are shelters for group get togethers that can be rented.

I was looking forward to exploring the scenery. From what I could see with the snow and the cold, it looked promising. Would things freeze in the cold? Find out, next time on Ratsofrass!

Just another blog to share some thoughts with the world.
View all posts by ralph →
This entry was posted in campground, pictures, review, RV, travel. Bookmark the permalink.