First boondocking with a history bonus 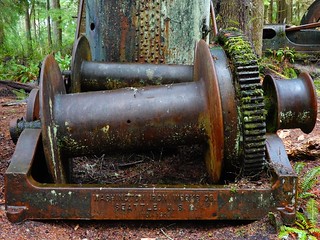 My original plan had been to head out to one of the recreation sites in the Port McNeill area. But the roads remained icy for days following the snow – including adding a bit more ice with rain falling in the cold middle of night. So my plan now was to find something close by I could still drive to.  I was finally going to do some boondocking!  What I found worked out reasonably well, with the bonus of some of Vancouver Island’s most significant historic remains!

I had spent a bunch of my time while in Port McNeill walking out to potential boondocking sites just out of town. The roads were certainly bad enough, even walking was treacherous in places. My walks were so far and wide it even yielded a wellness check call in to the RCMP – someone concerned I was aimlessly wandering the roads! But between talking to the officer, the forestry guy I met up one road, and a bunch of locals, I didn’t really yield much in terms of good spots even with my walking. I found one that was a backup spot, but it still had a lot of snow and no cell signal beyond emergency calls. 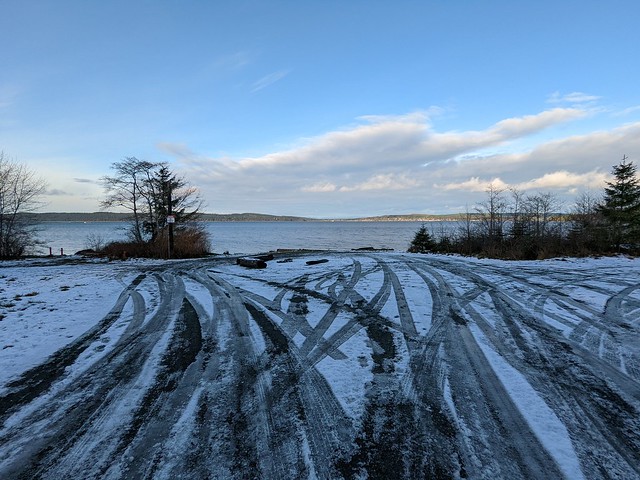 This spot had two signs up saying no camping, yet the locals said it would be fine. I found a parking spot that would have worked in a pinch near town, but just a little to close with people parking there for whatever reason while I was checking it out once. So off I went, out of town to check out Suquash main, a logging road that wasn’t really active anymore and seemed to be on level terrain, not too far from town. 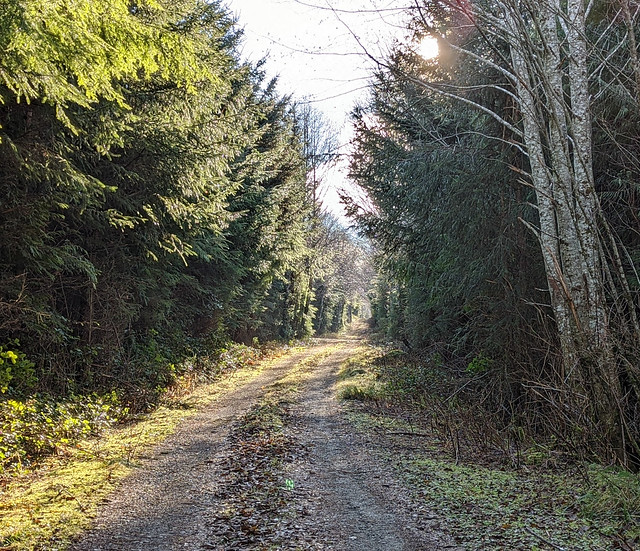 Suquash main road. You can see the brush has been recently cleared away on the sides.

The Suquash main was level as expected from the topo maps I looked at. The recent clearing had me suspicious that some activity was happening on this road. My only challenge was the occasional leaning tree hitting the RV despite me moving over as much as possible. As a bonus, most of the snow/ice was gone here, it had been melting quicker here than in my previous camp. I see some potential boondocking spots along the way. Checking my phone, I do have some cell signal here, so this area is looking good to boondock! 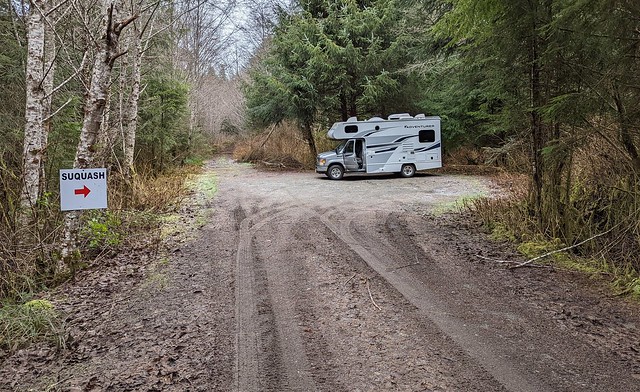 What is this Suquash the sign is pointing to?

I arrived at a sign pointing to “Suquash”. I know I’m on the Suquash main road, but I’m not sure what this is pointing to. I quickly inspect the little parking area and see a good trail leading off into the trees. I make a  mental note to return here and check this out for sure – it must at lead to the beach, which is not far according to the googles. Beyond this point the road got a lot worse, so I headed back the way I came in. There is no cell signal right at this parking lot, plus there are likely to be people coming here I figure. 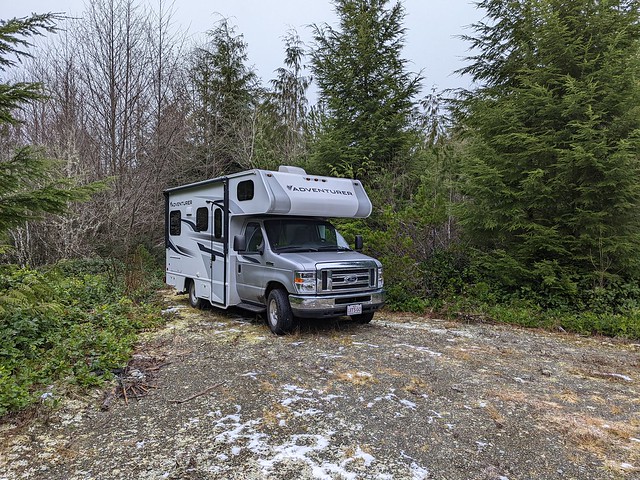 Back a couple of kilometers there is a good road that quickly dead ends to overgrown brush, but just allowing me to tuck in a little ways off the main road. It’s not hidden from the road, but it is the best spot, with some cell service at least. I’m level, so I declared myself ‘camped’ in my first boondocking spot! 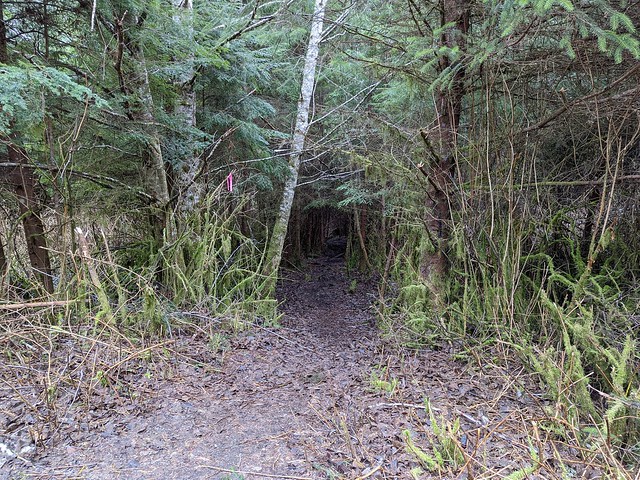 Trail starts with a hole in the brush

I was in there early, so after lunch I take off down the road back to the Suquash sign. The trail entrance is dark with brush overhead, and muddy just inside the dark tunnel. But it changes to an open understory of second growth trees. I could see quite a few people had been tramping about, but to what? I see a branch trail leading off to the right, but the main trail heads on down to the beach I was hoping. 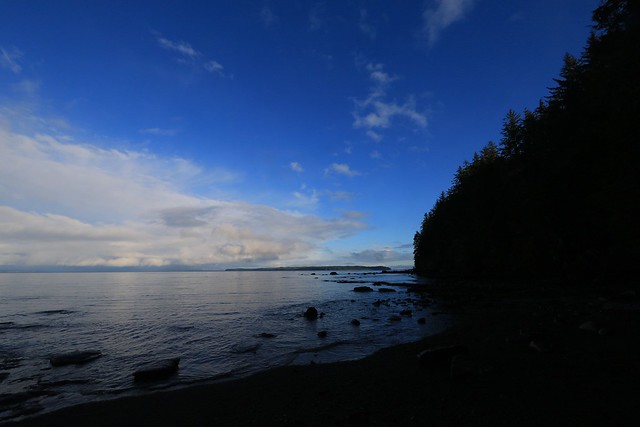 A nice beach silhouette shot from one of my days there

Only a few minutes later with a bit of a steep drop I was down at the water, enjoying the breeze on what was a cool but not terrible day. I walked up the beach to the northwest. I was pleased I at least had beach access a half hour away from my rig. While my previous campground at Naka was on the beach, it wasn’t much of a beach walk – the beach ended abruptly in rocks only a short ways down from the campground on one side, and a creek blocked my walk on the other side. Here, I could walk forever it seemed – only limited by the short day which had me turning around and heading back suddenly as a check of the time revealed I was only an hour away from dark.

I had no time to check out the branch trail – I resolved to return to it tomorrow and see if that led to anything interesting. As my boondocking spot had internet service if I placed my phone just so in the right window, I turned on my hotspot and proceeded to research this ‘Suquash’ I had seen on sign and googles label. It turns out that I am sitting right next to Vancouver Island’s first coal mining area – going back to the natives selling coal to the British by the canoe full!  Mining has long since shut down, but the pictures I was seeing showed significant remnants including the manager’s house, and various steam equipment used in the early 1900’s. I was definitely going to see if the trail I had not followed went to these ruins! 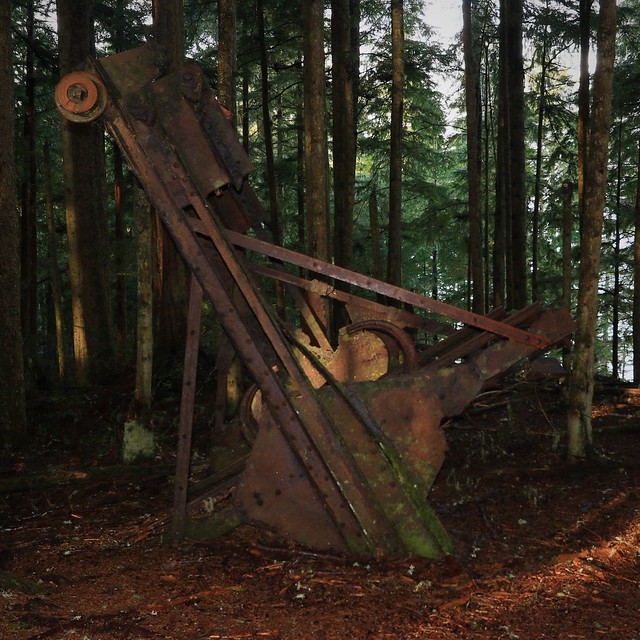 My walk the next day down the side trail took me up a small hill, then I was confronted by the first ruins. Now I knew why people were tramping about all over the forest – the ruins are spread out among the trees and you need to find them. The most significant remains  are close to the edge of the hill overlooking the ocean, but smaller remains are found further in if you explore a bit. 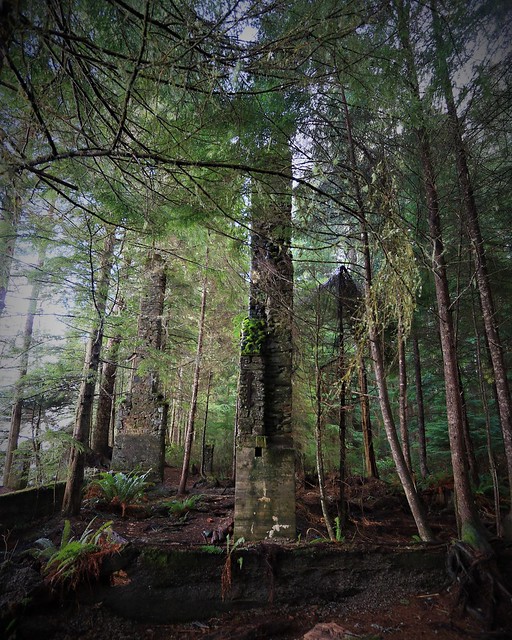 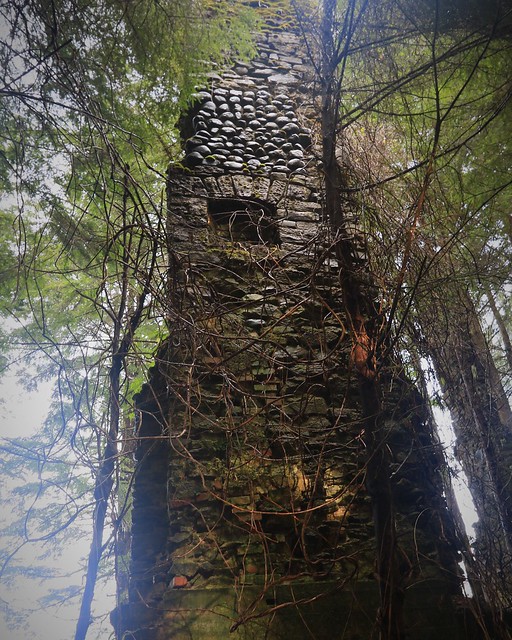 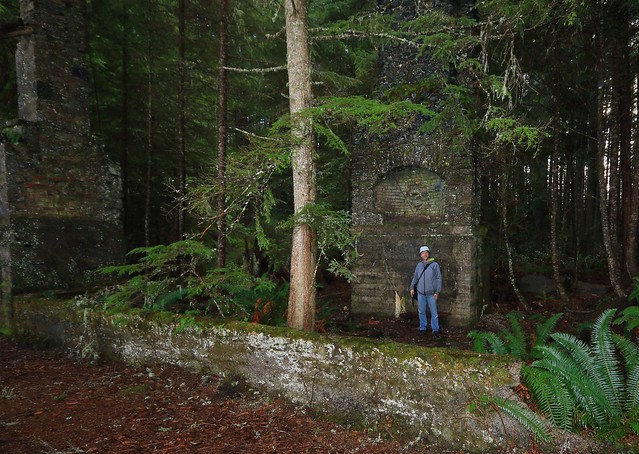 I could tell the manager’s house had been an impressive building in its day – even the remains were substantial, with a concrete walled foundation and chimneys with several fireplaces remaining behind. In contrast, all other housing seems to have either been removed or has decayed to nothing more than a depression in the ground. One hundred years of nature reclaiming the mining town has left only the most substantial structures, and even those are dwarfed by the big trees around me now. 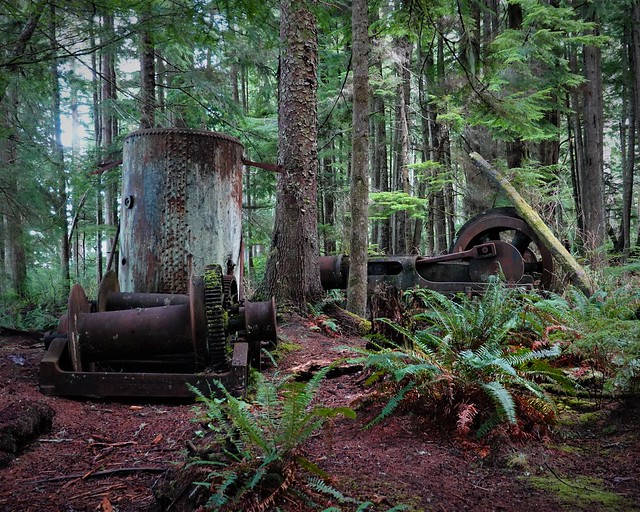 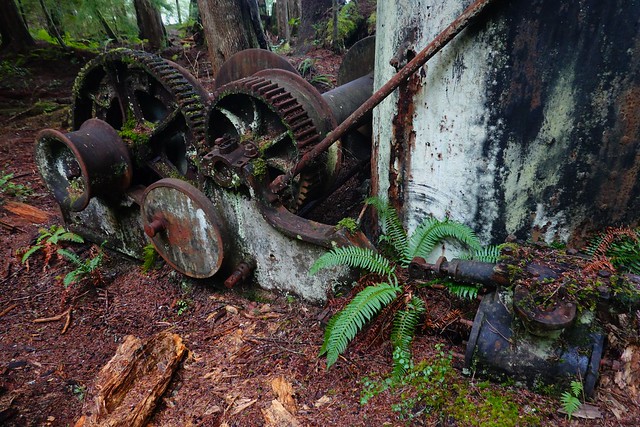 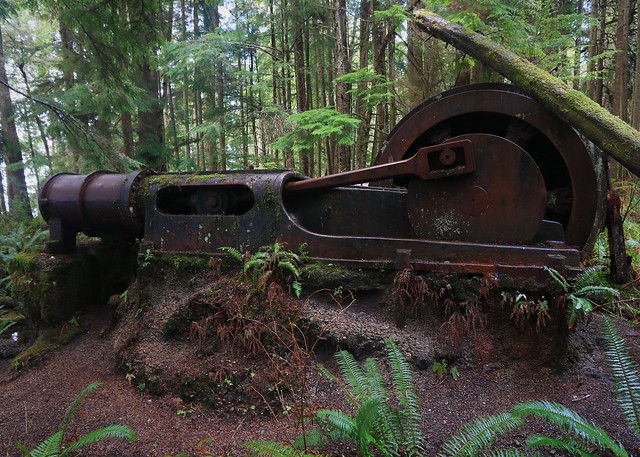 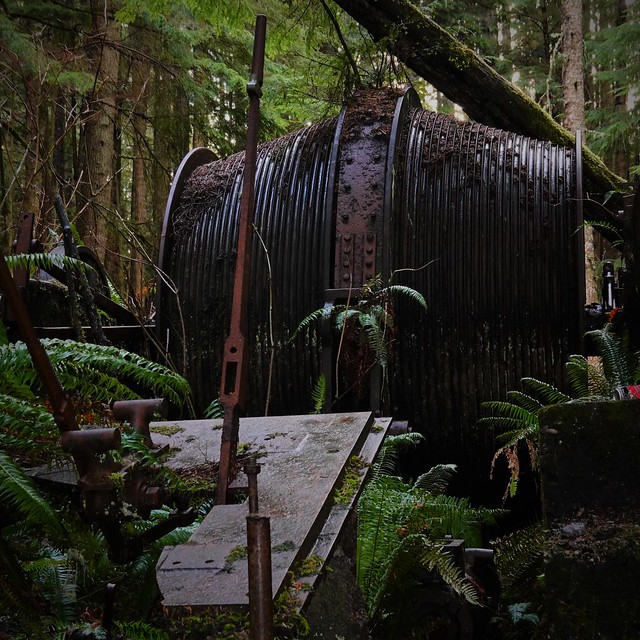 The mechanical steam works still remaining just floored me. I’m showing you four pictures here. I went a little nuts taking pictures there and probably have like a hundred between my various cameras. Oh, someday I’m going to do a camera review for the Pixel 6 Pro, comparing it to my Sony point and shoot and my SLR. Spoiler alert: the Pixel 6 Pro does 90% of what my other cameras do. 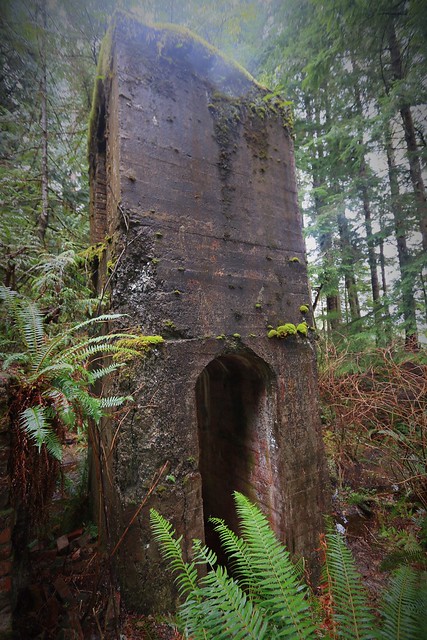 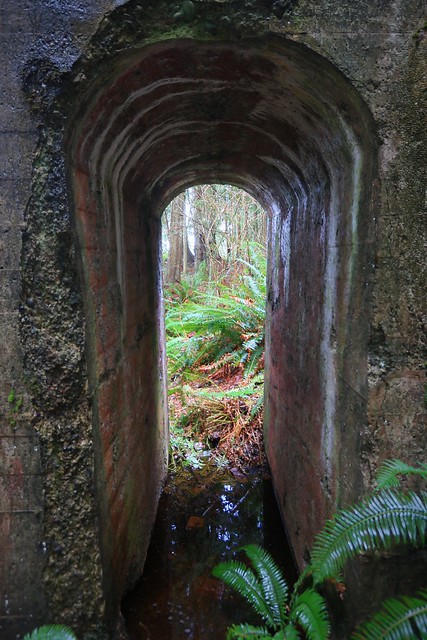 I’m guessing this substantial bit of concrete was a furnace of some sort, but I’m no expert on any of this historical industrial stuff. But it was another cool thing to photograph. I was super pleased with my visit to these ruins – finding them unexpectedly like this is a real joy. This is why I’m doing this – traveling and finding unexpected discoveries fulfills me in a way that just reading about it just can’t.

As if the ruins were not enough, the beach was pretty amazing too. A little waterfall, cool rocks and sea moss – I could have stayed longer just exploring this area but the weather was about to turn really nasty so I decided to head out to hunker down at Cluxewe Resort. That will be next post  – but I’ll leave you with some other pictures from the area to finish this off. 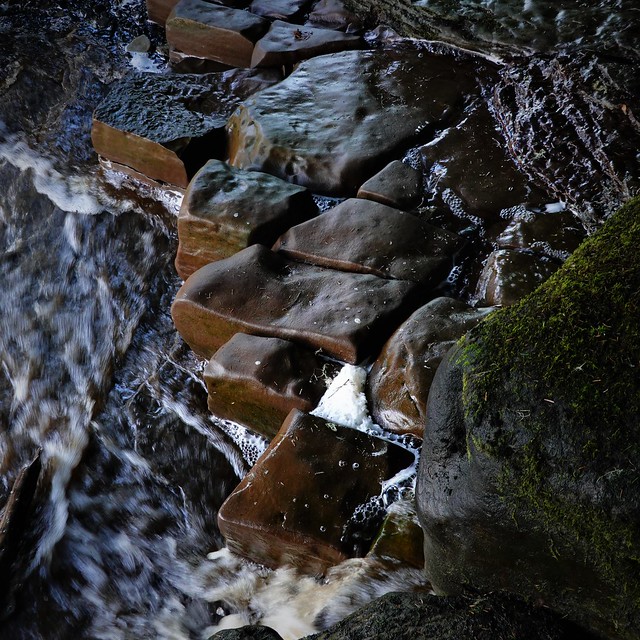 Rocks below the waterfall 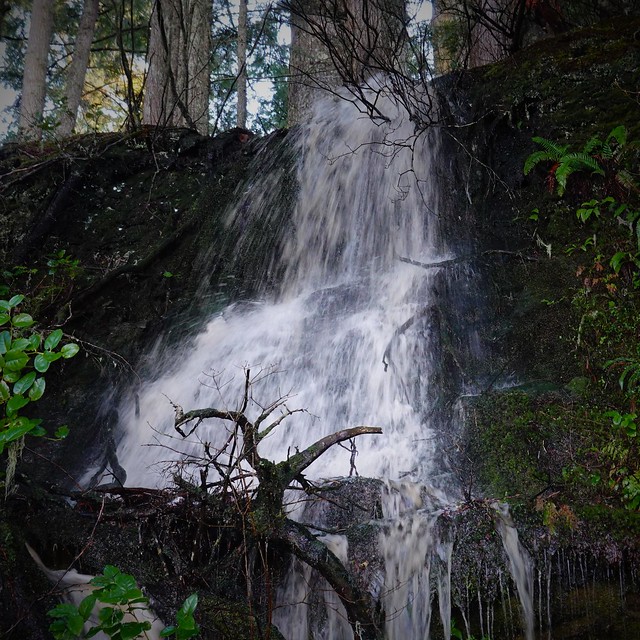 Waterfall directly below Suquash mine ruins 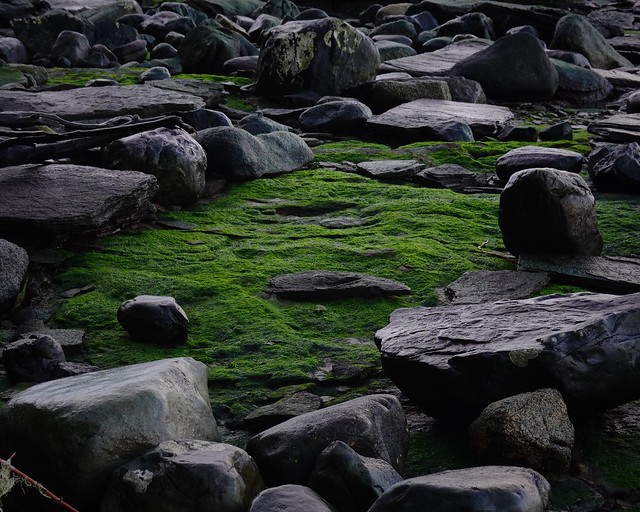 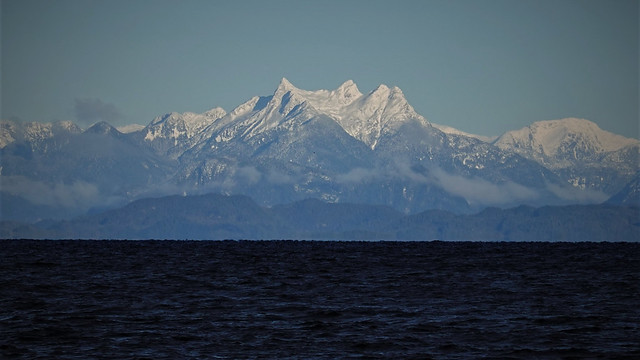 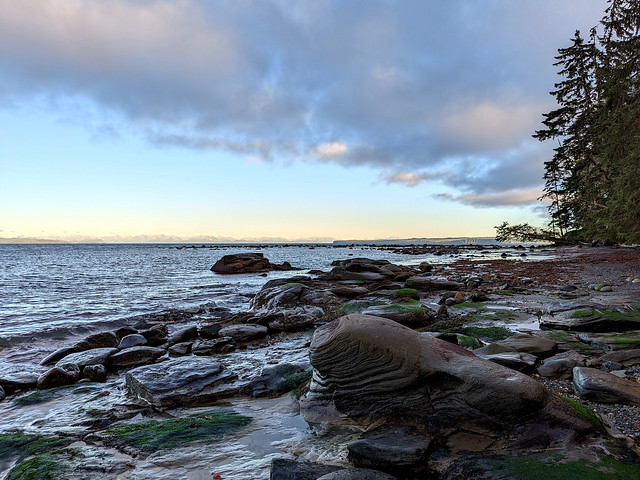 Lots of beach rocks to explore 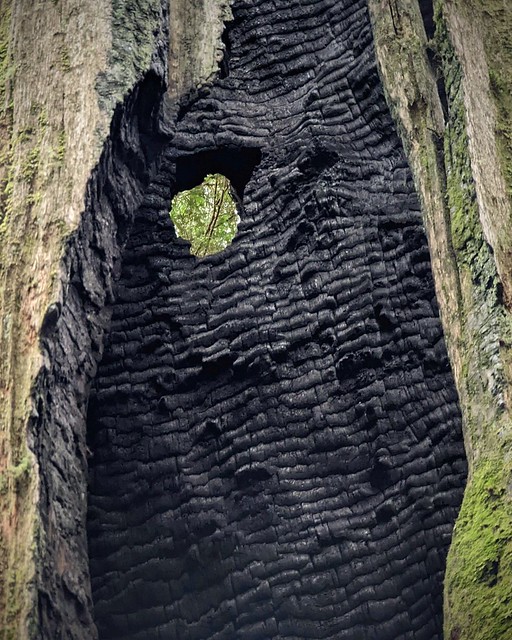 Just another blog to share some thoughts with the world.
View all posts by ralph →
This entry was posted in boondocking, pictures, RV, The system, travel, WhoKnows?. Bookmark the permalink.