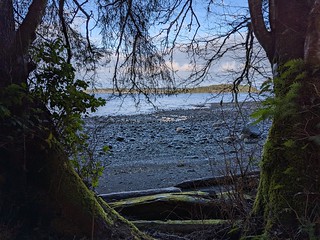 It turns out I left Naka Creek just in time as the mostly rain forecast turned into mostly snow, which turned into mostly ice. Good thing I booked a week at Broughton Campsite, the roads were crap everywhere off the mains! But I would have a lot of time to explore Port McNeill while I stocked up and stayed warm with full hookups again.

I knew I was staying a week the minute I heard the price for full hookups at Broughton Campsite: $20 per day. The googles reviews are accurate for this site: “rustic” or perhaps a little run down if you’re a downer. But the bigger issue is that the status of this site is uncertain at the moment. It might be shutdown at the end of the year according to Ray, one of the site managers. But there is hope that they will sort out their issues and the campground keeps going. 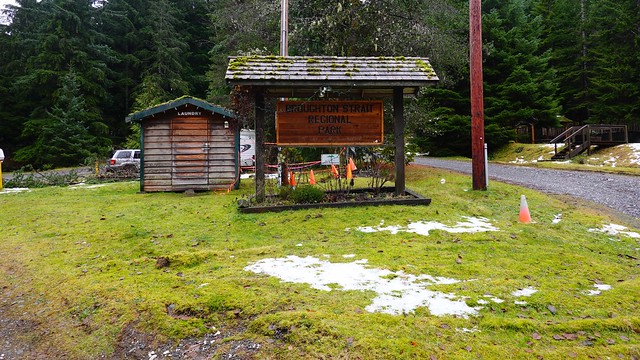 So, I can’t say anything about the washrooms as they are closed for the season. The one washing machine laundry is broken, but they are not going to fix it in low season with the status of the campground uncertain. A laundromat is within walking distance anyways. The sites are shady (in low sun), with big trees all around. While the site is on a hill, there are no views either thanks to the trees. Thanks to the same hill, I wasn’t going to try leaving after the snow fell – the road got slippery really quick with a little rain thrown in and then cold after that. 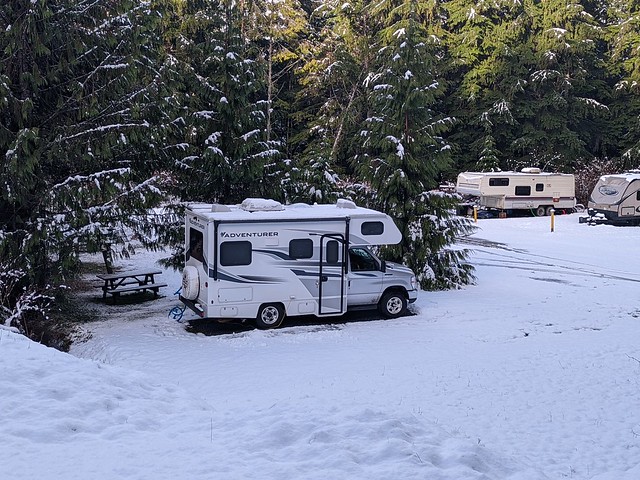 Speaking of walking distance, I could not believe I’d found another campground within walking distance of shopping. In this case, the main shopping area for Port McNeill is all clustered fairly close together, and ten minutes walk away. The campground even has a path through the trees which cuts a few minutes off the trip to the grocery store. If you are heading to the harbor for a view or a meal, the main road is quicker. I hope the town (which manages the site) sorts out the problems and keeps this campground going – it’s got the realtor’s “location, location, location” all sewn up. 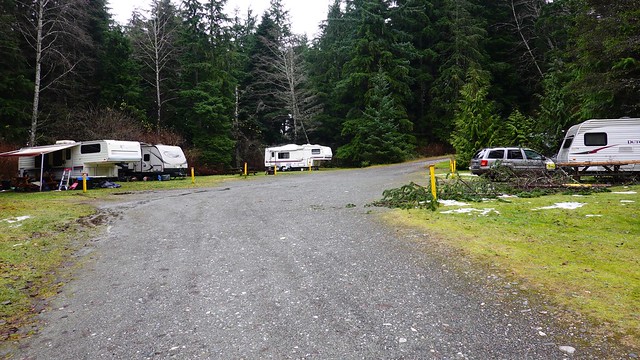 The path to town is just to the left of the picture. I’m behind the trees on the right.

In the meanwhile, I took advantage of my walking distance campground to stock up on supplies, walking over to the IGA grocery store, and the hardware store to buy a new axe. I much rather would walk over than pack up the RV and drive. A walk is nice through the forested path, and faster than packing up and unpacking again. 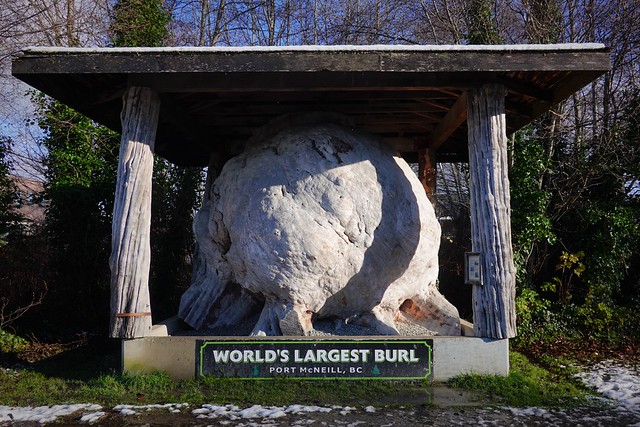 It’s taller than me.

Port McNeill does have some touristy stuff, like the world’s biggest burl. 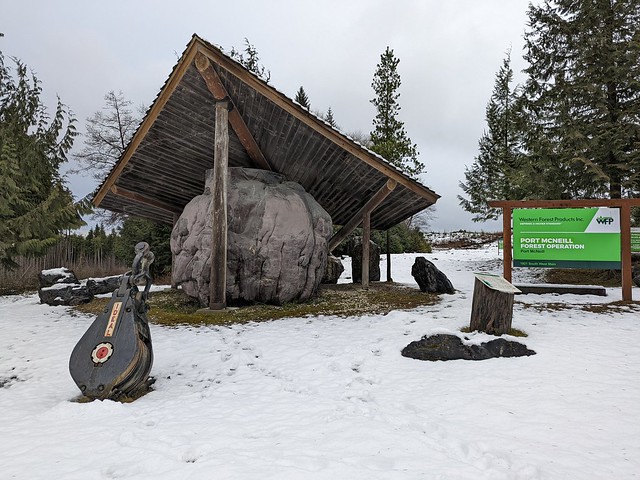 It also has the world’s second biggest burl, formerly the biggest. Let’s just say if you are a fan of big burls, Port McNeill is a must stop destination! 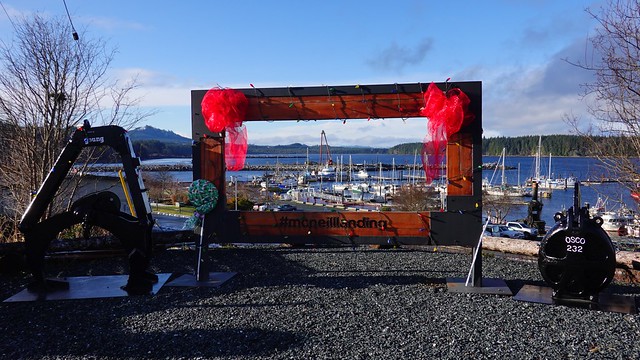 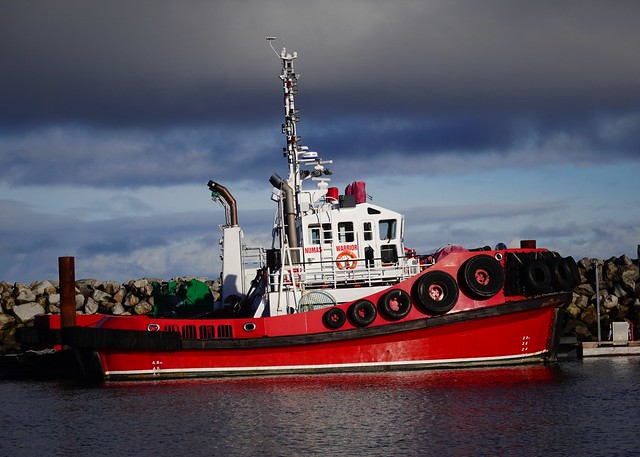 Red boat all tired out 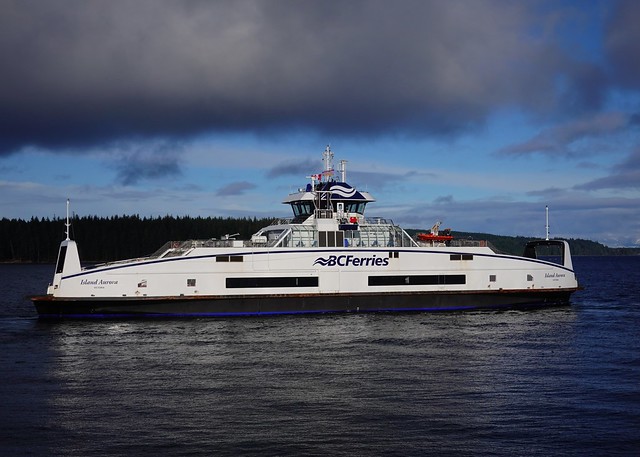 To Sointula and Alert Bay on Malcom and Cormorant Islands respectively

The harbor is pretty nice, with interesting boats, and a ferry that takes you to Malcom and Cormorant Islands. 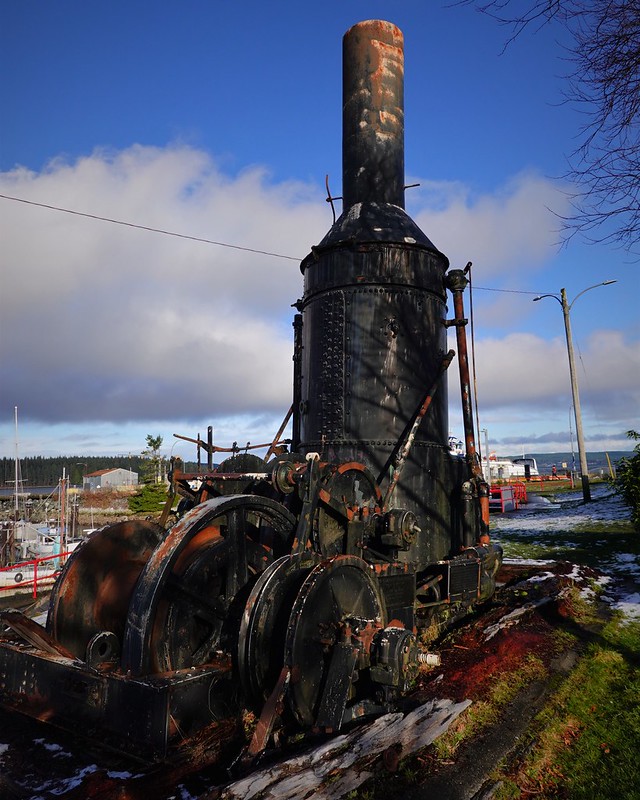 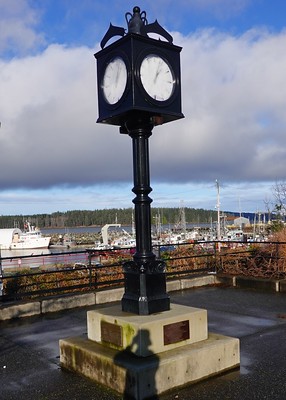 Of course there is a bit of tourist kitsch, although this is more interesting for historic and utility purposes at any rate. 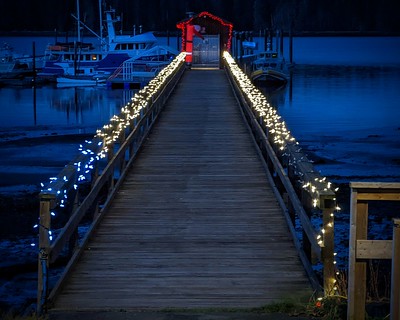 There are even some Christmas lights along the harbor to look at when it is dark, which is a lot of the time right now.

I did manage to dine out a couple of times while I was in Port McNeill, once at a brew pub called Devil’s Bath, and on my last night there at Gus’ Pub, a more conventional burger and beer place. 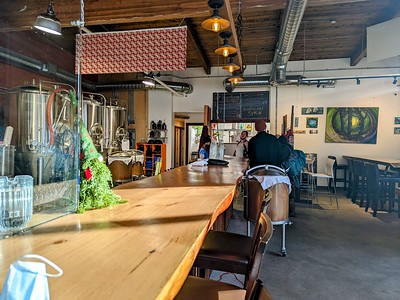 At the bar for a flight. Came back for a meal later.

Devil’s Bath is a brew pub that is a real pub – full food service with beer brewed in house. The selection isn’t large, but it’s a small brewery. Unfortunately, between the golden, Kolsch, and red there was not much to be enthused about. All were slight variations of a meh mild beer – fine on a summer’s day but nothing complex in hops or malt. The brown saved the day being a nice meaty beer with a good balance of bitter nut and malt sweet. After my flight, the brown was all I drank. The pizza I ordered was delicious – wonderful hand made thin crust. The service was a bit slow, even allowing for the kitchen mistake that delayed my pizza – hole in the middle! 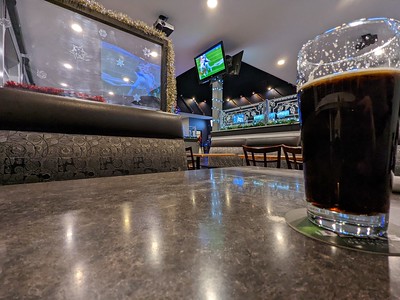 A bit of a sterile environment

Gus’ pub was more your standard bar, catering to all tastes. That said, they had a better beer selection owing to just having to deal with taps. Two darks on the menu, of which I only had time to try one ‘nocturnal’ thing out of Victoria that was very good, a super dark sweet but toasty that was complex. It was taken with their signature burger – your standard bacon-mushroom-cheese and all the accessory vegies a burger would have. Service was excellent.

If I could only pick one, I’d go with Devil’s Bath. The rotating tap is supposed to be a Chocolate Stout next, I need to get back there at some point for that. But Gus’ is fine – the crappy reviews on service are likely when they are slammed with minimal staff. Or they just hired some dud servers at some point. Or they reviewers just want to complain about something. Who knows, all I know is both places were good!

There was even a bit of a hike along a trail along the ocean out of town. I’ll leave you with those pictures. My next spot was picked to be near town, off of easy roads, hopefully with cell service. While the roads were somewhat better, I wasn’t taking any chances going far away on steep roads. It was going to be real boondocking this time. See where I ended up next time! 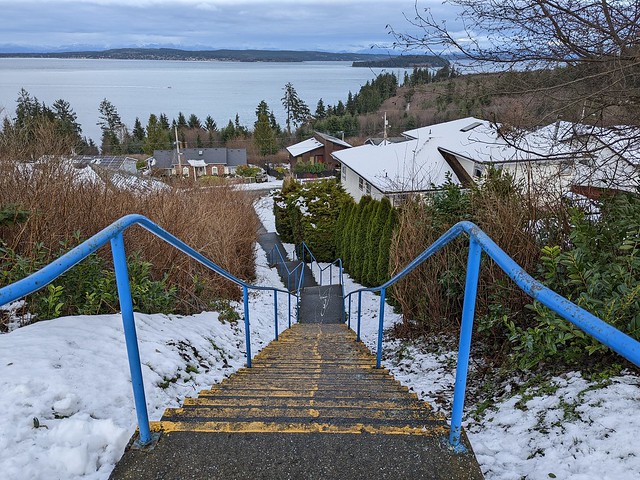 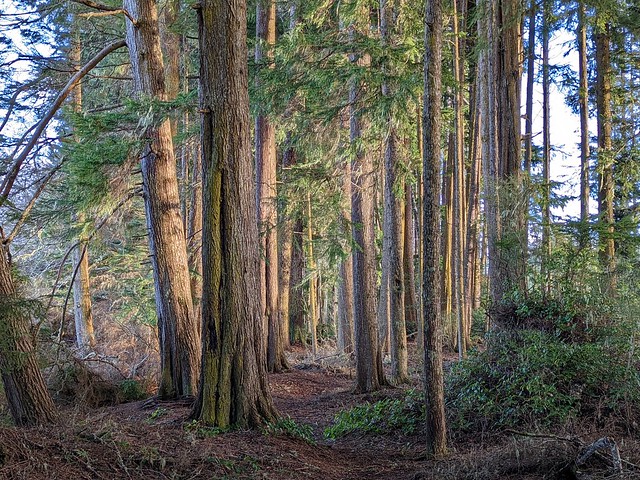 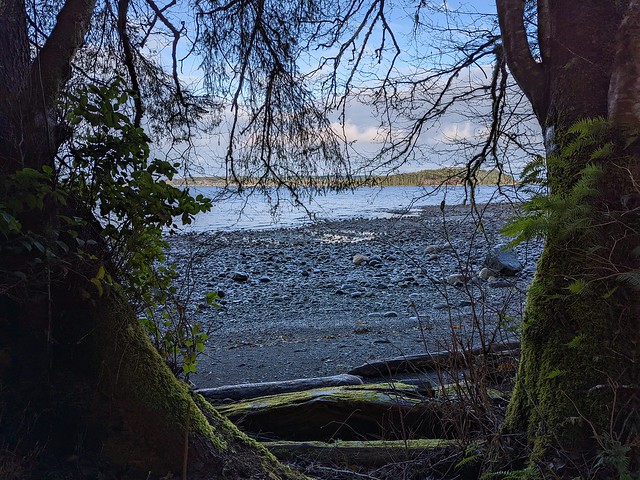 Just another blog to share some thoughts with the world.
View all posts by ralph →
This entry was posted in beer, campground, review, RV, travel. Bookmark the permalink.