Snowed in at Naka Creek 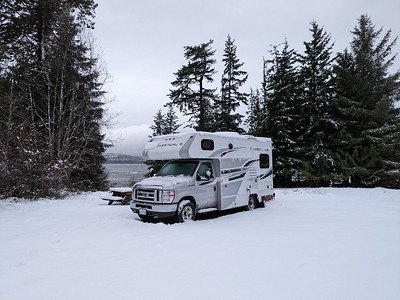 Part of why I’m doing this traveling bit is to avoid winter. I hate snow. But Vancouver Island will get snow sometimes, I’d just hoped it would hold off a while. But it was not to be, the snow fell in copious amounts, leaving me with no way to leave on the road I had come in on. 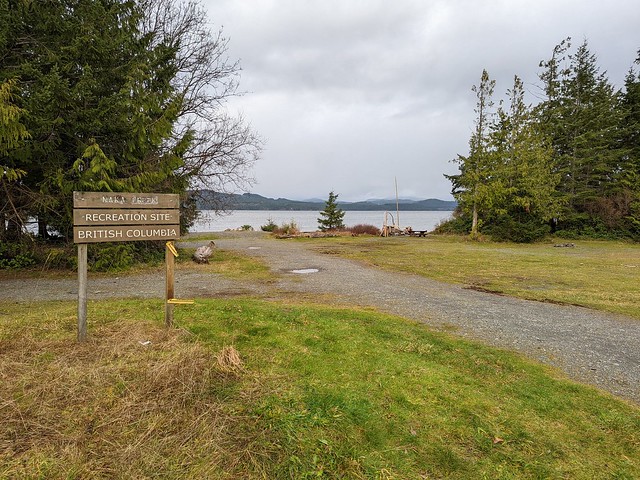 But I wasn’t really worried. I’d checked the forecast before heading out here and knew another warmer wet system was coming in after the snow – melting the roads enough at least for me to get out on my alternate low road. As a bonus, I had internet service at this remote site. The tower at Telegraph Cove just reaches over to where I was at Naka, giving me enough internet to do the basics. My internet research while parked informed me the other way out suggested by the hunters I met was not that good – way higher climb into deeper snow that would not melt at this point. The forestry guy I met on the road on one of my hikes confirmed this; it was going to be back the way I came and hope the snow had melted enough to make everything passable. I still wasn’t too worried. Talking to the forestry guy, he gave me a road report as he had driven that way. He said the road would be fine for my RV. However, it was a close thing getting out, as you will see at the end of my story.

Surveying the scene in the morning after the big snow dump was a new thing for me. While I have been on Vancouver Island during a snowstorm, I’d never been right down at the ocean. Seeing the snow and the pounding waves was a new experience for me, but I still hate the snow.

Naka was protected from the strong winds, but I could see the angry sea not far out. So not fishing weather today. I’m hoping for a good dump of rain to melt the snow, but it never really amounts to more than sprinkles. The snow goes down a bit, but there still is a lot there. 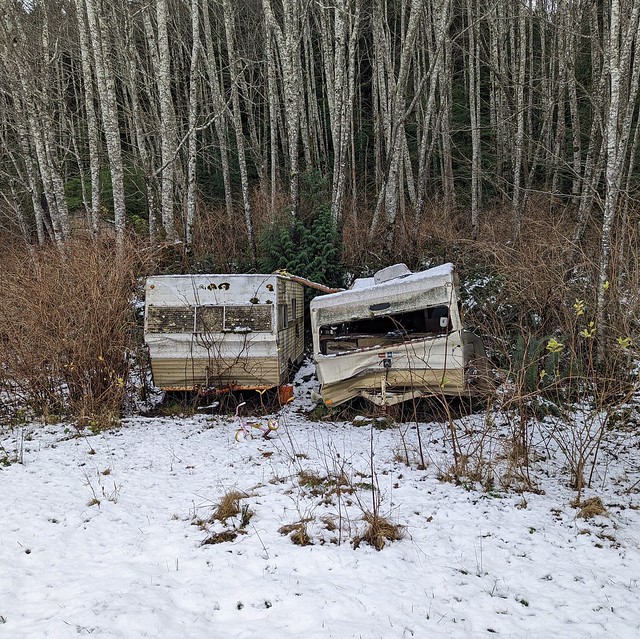 The campground has a lot of informal facilities, and a lot of outright junk. But I used the junk to my advantage, salvaging some old plywood for a bit of shelter for my generator, which just fits under the back of the RV while running. Now I have plywood walls to protect it a bit more from driving rain. 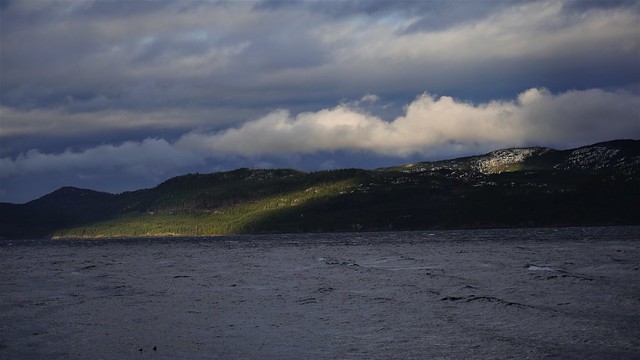 Eventually the sun does come out again, but I find that despite picking an open site, I am not far enough back for the sun to clear the trees. Good thing I have the generator – it gets used every day to charge up the batteries a bit, and while it is on, I run my furnace to warm things up good in the RV. I’m much more comfortable now. But I find I was conservative in my hour a day generator time I allowed myself. That covered the whole week on one tank of gas. I have a 4l gas can that will let me fill up the generator twice, so I can run it more and be even more comfortable! 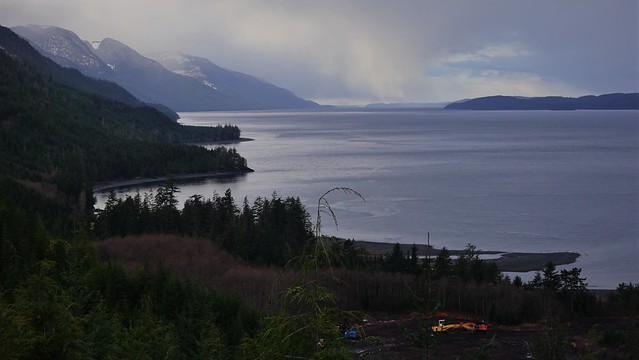 I did get out for some hikes. There are no nearby lakes, just some valleys to hike up the logging roads, with a few views along the way. My hiking was also to assess the road conditions at 250m elevation – the height I’d have to pass going back the way I came along the east – north hookup road, going back via Junction Pool which I had previously visited. Every day there was a little less snow, to the point I thought I’d be OK by the time I wanted to leave.

I also did some fishing in Naka Creek. There is a nice pool upstream of the bridge that holds a large brook trout with my name on it. He did take my lure once but was not hooked. Despite trying again the next day as well, there was still no fish on my dinner plate. 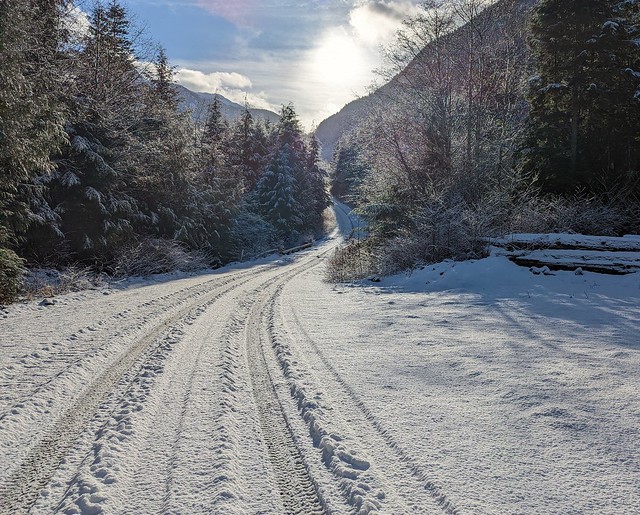 As far up the Naka main road I went, not going back this way

The main road going directly back to the highway was one of my last day hikes, just to see if it might be possible to go this way. I ran into the forestry guy not to far below this point. There was no way I was going to negotiate steep grades with this much snow on the road, not without chains at least!

I had planned to get out on Saturday, to avoid the logging trucks, but thanks to my internet connection I hear that another storm is coming in with high winds. The road was sure to have lots of fallen trees if I stayed for that, not to mention, more snow in the forecast! So I pack up a day early and head out, having seen the road near camp is in good condition going back. 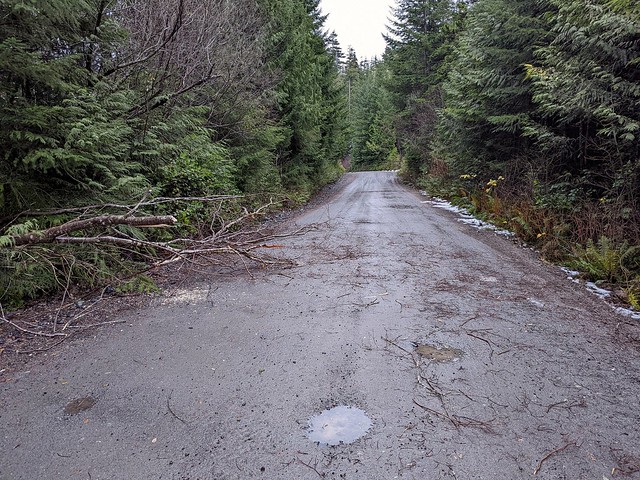 Even so, the winds had already picked up when I left in the morning, and one tree had to be axed not too far from camp. Then the snow started in on the road as I climbed. I wasn’t too worried until I had passed the high point and was in the hills between the ocean and the Eve Main road. There is a down, with a hair pin corner, with a bridge on it. Of course, that is where the snow is, and slippery on the bridge to boot.

I had a butt clenching moment as I took the corner slowly and gave as much gas as I dared crossing the bridge to get some speed leaving the hairpin and climbing up through the snow on the other side. But with just a bit of a rear end slither on the RV’s part, I make it past the corner of doom, and from there on the road got progressively better.

The only annoyance was the ‘axe tax’ the road took. As I approached the Eve main, there was one last tree partially blocking the road. I could have perhaps driven over the bit like the pickup trucks had done, but I decided on caution and got out with the axe and hacked away enough bits to fit the RV through. I was relieved at this point, as I could see the Eve main had been ploughed, and I knew the road back to the highway had no major hills anyways. But in my relief, I just got into the RV and left, with my axe still embedded in a tree on the side of the road there. I didn’t even think of it again until I went to put it away after I was parked at my next camp, 100 kilos away. One axe, added to the shopping list in Port McNeil!

Just another blog to share some thoughts with the world.
View all posts by ralph →
This entry was posted in campground, pictures, RV, travel. Bookmark the permalink.