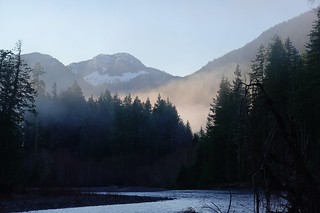 My next destination was Junction Pool – a confluence of the Adam and Eve River that ended up feeling more satanic than biblical to me. At least, it felt creepy out there. Was it just the dark trees or was something out to get me?

The area is strange to start with in that the googles does not have good maps of the roads out here. In fact, no app I have accurately depicts the roads out here. I made a wrong turn once where the googles had me off the road, telling me I had to turn left now, when the main road actually went straight and I branched off onto a side logging road. It is better to navigate out here by signs and instinct – don’t rely on the googles! 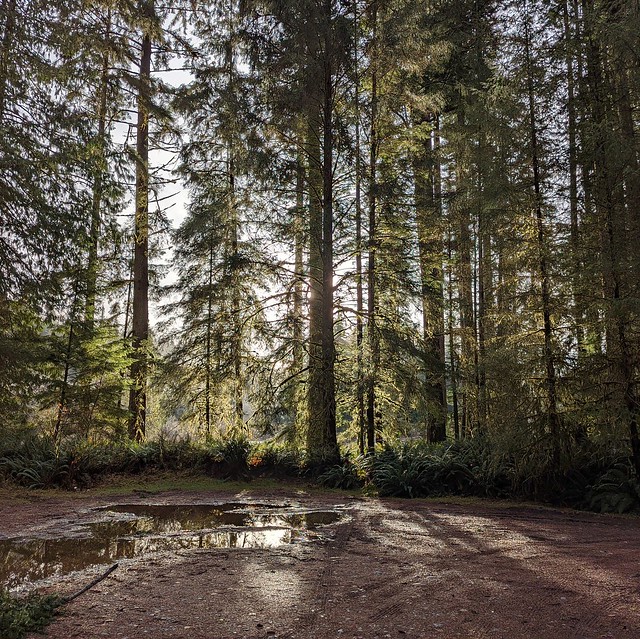 I found Junction Pool without much further fuss. It’s a narrow former main road, turning down a darker treed road that finally opens up a bit at the first campsite; a pair of sites that are in the sun, if the sun gets high enough to clear the trees across the little clearing. You head further down and all the sites are in trees. But the last site closest to the river is at least getting a little sun poking through – plus it was the first time I was level without levelers! 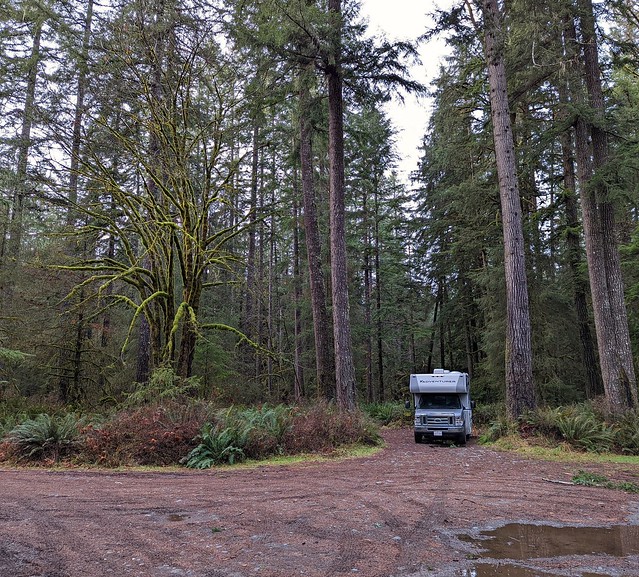 I setup, carefully getting out the generator I had bought after much searching in Campbell River a couple of days ago. It’s just too shady out here to not have a genny. Yes, I might just get by on battery for a week, but no furnace. Plus the RV just gets too wet when you’re trying to keep warm on a wet day. I say I ‘carefully’ got the generator out because it’s a little portable guy – but only just small enough to fit in my tiny main storage area outside. I have to remove it *just so* or it will stay jammed inside. Same with placing it back in. While that shopping experience was one of the more stressful ones, I was looking forward to being able to crank up the heat a bit. The rain had been replaced by cold – below freezing at night and not much warmer during the day. I can take cold for a few days, but when you live in it, you want things a little warmer I have discovered. 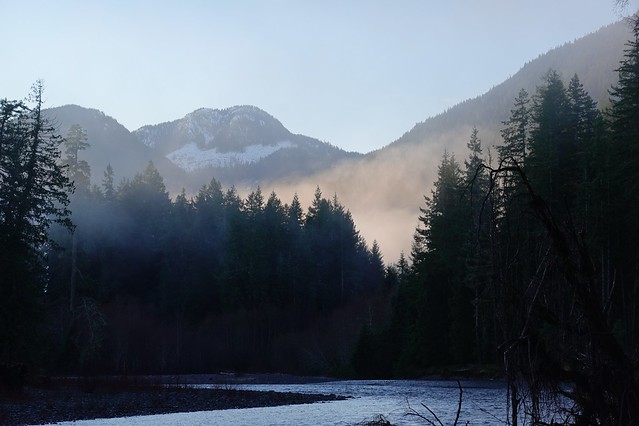 I headed down to the river. Indeed, this is the junction of the Adam and Eve River, I saw both from the vantage point. I also saw some potential fishing spots, but not quite as good as I’d hoped. I knew hikes here were limited – but having fishing right by my camp would occupy me. I headed back to my rig to make lunch. 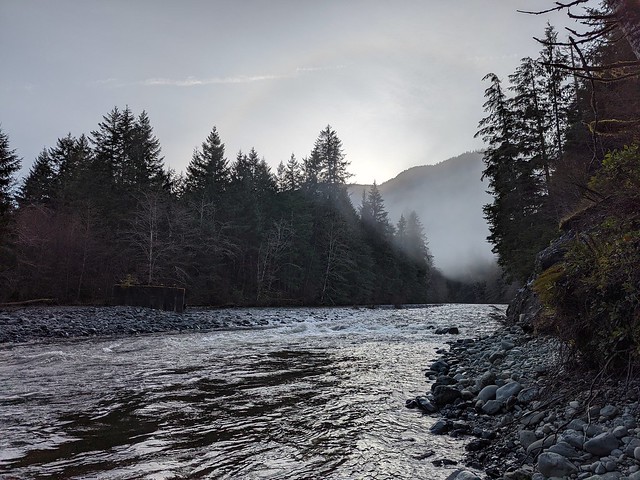 Post lunch, I head back to the river, fishing rod in hand. The sun is out, but just going behind the hills. I have just missed the best weather fishing in the sun, drat! I can see some smaller pools, with water turning in them. Fish could sit in there and have a nice rest, waiting to bite on my lure. But there was no bites that day – another night of plan B meat was at hand. I didn’t try that long anyways, the air quickly got cold in the shade.

I return to my RV, and work on my little temporary RV repair job. Coming in, I had to move over for a logging truck on the main forestry service road (FSR) going in. The road here was wide, so no problem passing, but I misjudged the tree that was leaning into the road and clipped it with my awning. The cover was smashed off the rig, exposing the awning motor. A bit of plastic and some tape fixed that, at least until I can get around to ordering the parts and fixing it properly. You break things learning sometimes.

Evening dark had hit, I settled down after dinner and suddenly I hear a scream, a female voice. WTF? I thought, there is no one here now – the one van that came earlier is long gone. A short time later, I see a truck has come in, they are setting up shop down at the far end where the clearing is. They turned out to be hunters, coming in to try and get their elk for the season. Perhaps one had come in earlier and I didn’t notice? There were woman with the hunting party. But the next thing I hear is a violent expulsion of air, like a dolphin would make expelling air when it surfaces. WTF, again? Doesn’t sound like a tire leak, or blowout. My tires still looked fine. I have no explanation for that one, other than some bear having fun with me. But now all the sounds seemed strange to me out here – I was now unsettled in the woods rather than at peace. Sleep came, but slowly, as I listened for any possible mouse intruders, and the strange sounds of the forest here. 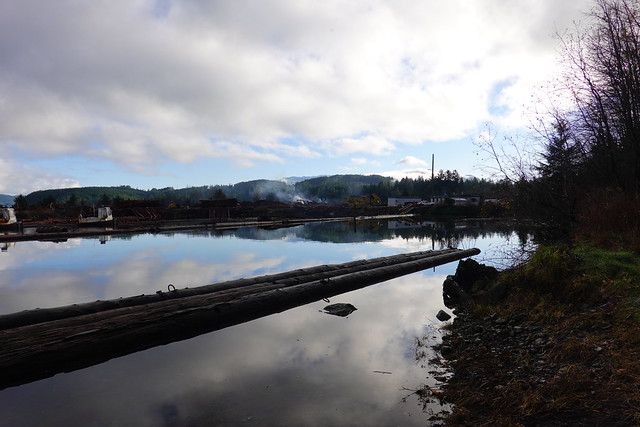 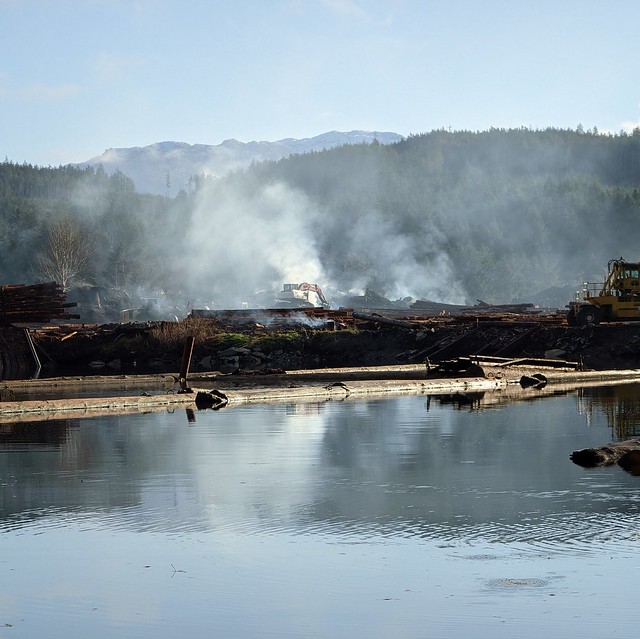 But nothing else happened. I hiked the next day down to the Eve River log dump on the ocean, about an hours hike down the main road. Practically every road is marked private, no trespassing. One choice of road eventually leads you to the water. 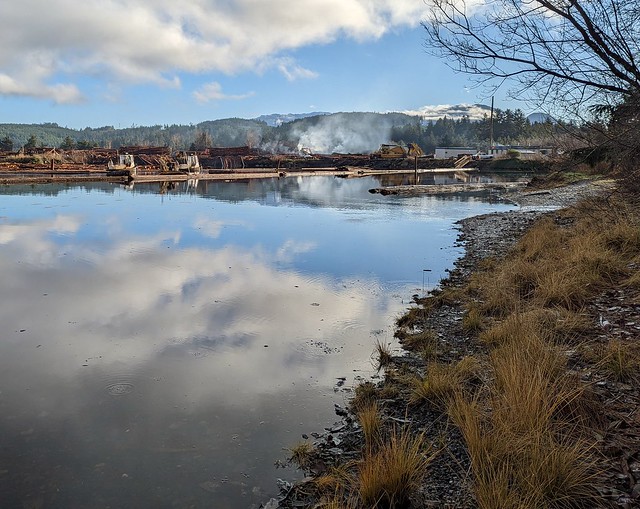 Boat launch. Really, it’s the little bit on the top right of the photo. 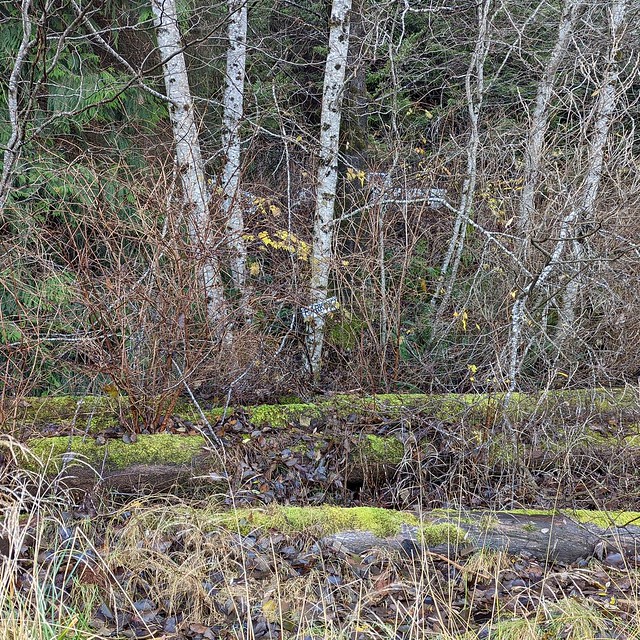 Can you find the parking sign in the scrubby trees?

You can launch a small boat here but that is about it. It was high tide, so things were a little different, but parking; there is no parking at high tide – it’s all covered in brush or under water here.

I walk back, and manage a little fishing in the Eve river at one spot along the road. It was not the greatest spot – I had to clear brush just to be able to cast my lure. The afternoon was back to on and off showers, but I resolved to hike up Palmerston Road anyways. I wasn’t going to spend an afternoon in the RV in the spooky forest. 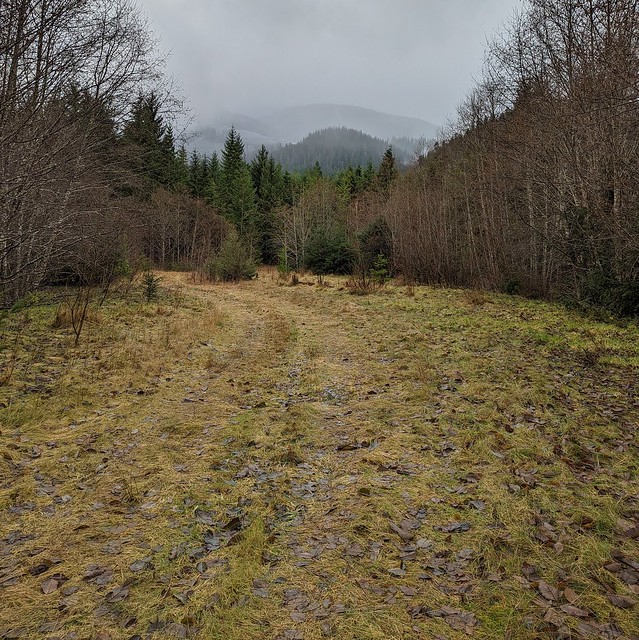 Log dump, this being a garbage dump, all filled in.

The road climbs fairly steeply the first kilometer, but just before the km mark there is an old dump for discard wood that turns out to have potential as a boondocking spot. There is sun, there are level spots to camp, and there is cell signal to boot! This might be a good one in the summer when campgrounds are full – it’s just a grassy field, the only camping evidence is just on the other side of the road where a closed access has been turned into a camping spot. 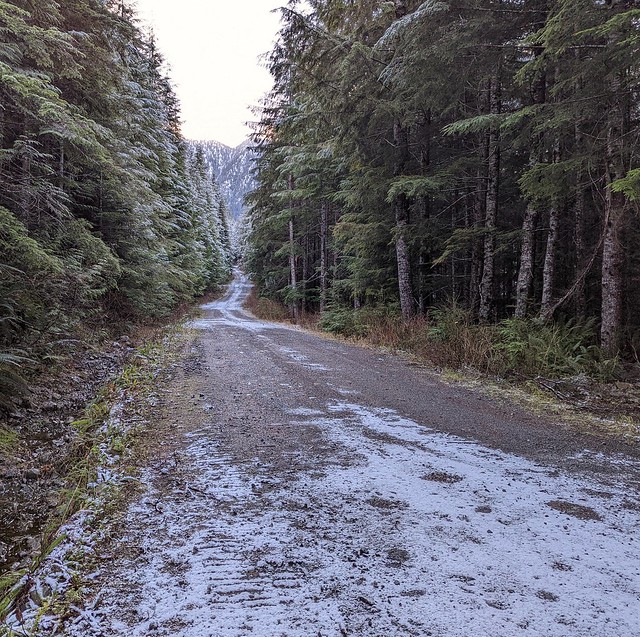 Palmerston road, as far as I went 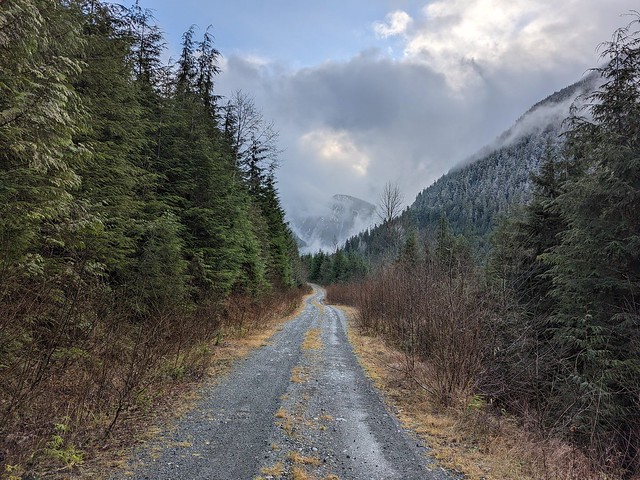 The road climbs through woods with little to see. There is snow as I get above 300m. It’s a pretty typical thing in BC – climbing out of the valley is boring but the interesting views happen once you are up high in the upper valleys. I noted some other potential spots to camp, none that great. Of course, I had to turn back just as the the views were starting to open up. Perhaps next time I’ll get further up the valley. 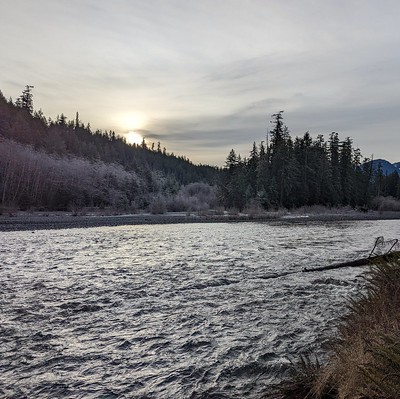 For now, I decided to head out of the spooky forest, and try another oceanside campground. I get one more sunrise picture, as I’m heading out early. It’s a little tricky – going to go up then down in a snowy forecast. I was hoping to beat the snow there, then go back another lower, less hilly route. I hoped Naka Creek wasn’t going to trap me there with a bunch of snow!

Just another blog to share some thoughts with the world.
View all posts by ralph →
This entry was posted in campground, hike, pictures, RV, WhoKnows?. Bookmark the permalink.