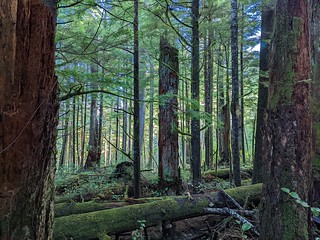 It would seem I was not going to escape the effects of the BC floods entirely. A thirty litre cap on fuel purchases had put a slight crimp in my travel plans. I looked at the mileages and fuel stops carefully and decided to visit Little Bear Bay, a BC recreation site on the ocean between Campbell River and Sayward.

Three stops for gas were planned and no sight seeing or shopping along the way. I wanted to have as much gas as possible once I was sitting in my campsite, and more importantly, when I came out – as the thirty litre cap was going to be in effect still. Gas stations on the north part of Vancouver Island are few and far in between. I suspected I’d be running the RV engine periodically while parked to recharge the batteries in what was supposed to be a couple of more deluges of rain coming while I was camped. But I managed my three stops of gas and 40 minutes of gravel roads without incident. No speeding logging trucks going past the other way on a narrow gravel road, this time!

I arrived at the campsite and saw it is indeed right on the ocean as noted on the BC rec website. But it was not quite empty – one van was parked at the far end at the most secluded spot in the part shade. I was slightly annoyed at not having free run of the site, but I know the coast does have some winter campers. I settled on a spot at the other end of the campground – somewhat out of the way and somewhat in the sun, for perhaps an hour a day at these low sun angles. Solar is a challenge in the winter out here! The campground has all level spots, sun (in the summer), with that one partly shaded spot at the end. Most sites will fit larger rigs. The usual facilities are at the site. There is a bit of noise from the fish hatchery, and an equal amount from the rapids of Pye Creek as they empty into the ocean; nothing that will keep you up at night. The sites all are right on the ocean with a view of the bay and the creek if you are closer to the creek end.

Post camp setup, I toured the immediate surroundings. There is a fish hatchery just across the Pye Creek exit to the ocean in front of me. I took a quick walk over following the road and found it lead to a locked gate that stated “authorized visitors only”.

Returning, I crossed the Pye bridge with the steeply falling creek on both sides. I don’t see anything like a pool I could go fishing in today. But I knew from the forecast that the weather was about to change to another torrent of rain then a drier bit, then another torrent of rain. So I was going to use the remaining part of my day for something outdoors. I get back to my camp and see the van leaving. Good, I have the whole campsite to myself now! I do a little beach combing where the van was, but going further down things quickly become impassable rocks.

I decided to head back up the road and explore the first branch road right I noted coming into the site. It is too narrow for the RV, but it looks recently maintained – let’s see where it goes. I’m walking through dense forest. The area was cut sometime ago and the new growth is thick and lush. I saw signs the road had been cleared of brush and trees recently; but only cleared with enough clearance for a truck. Coming to a branch in the road, I went left, following the recently maintained road, as compared to the road with some small trees across it to my right.

The road goes down to the ocean. The first surprise of my stay here was the tiny cabin I suddenly came across – still under construction, but mostly finished on the outside. Is this private land I wondered? I had zero internet out there so no way to check. The cabin door was padlocked, so no seeing the inside. And yes, I did holler to see if anyone was around. I wandered past the cabin and saw this is clearly a retreat of some sort, a summer home perhaps. How do I get in on this deal of being able to rehabilitate an old logging road and build a little retreat on the ocean’s edge, only an hour from a major town? The weather was definitely building to something more than spitting rain, so I high tailed it outta there and back to my RV for the evening. 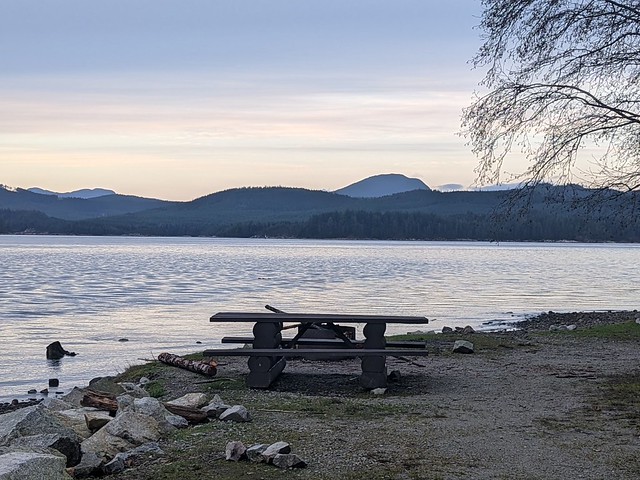 Little Bear Bay in a moment of clearing skies

The next day dawned with blue skies and puffy clouds, my one nice day before the weather hits according to the forecast I got before I left civilization. I wandered up the road again towards the fish hatchery. But I’m heading for the creek this time. I planned a quick scouting trip up the creek to see if there are any fishing possibilities at all. I found a faint trail leading off the bridge and followed it to the creek. Again, not promising – one possible small pool and that’s it. But the trail is more distinct here now – perhaps it leads further upstream to a good fishing hole?

I hiked upstream, checking along the roaring creek as I go, but the creek just gets more violent as I move upstream. But this trail has to go to something? It shows signs of maintenance in the past; cut trees and hacked slopes are evident. The trail gives up all pretenses of hugging the bank and climbs up steeply to my left; so steep a rope has been placed to allow me to steady myself. I climbed up, past another steep roped bit and come to a little opening. Peering through, I have a ‘holy crap’ moment.

I see below me a massive cascade of water, falling about 15 metres into a boiling pool of water. It is not the best view point, just a peek at it through the trees and bush. But the trail continues up, and so did I. A short climb later, I came to the upper fall, a much larger drop.

I’d estimate this to be a 45 metre drop; the picture doesn’t do the view justice having seen this massive amount of water coming down in front of you. I was perched on a ledge with nothing but a little bit of shrubbery keeping me from tumbling down to my death in the frothing water below. I certainly understand now why there is a trail here. I explored a bit further up but the trail peters out and nothing of interest is found.

Coming back down, I spotted a branch trail; how could I have missed this trail going down to the water? I saw the staircase built is in poor repair, there are missing stairs and precarious remaining ones to step on in places. I stepped down most carefully, being sure the steps are still firm. Reaching the bottom, I can go right down to the bank of Pye Creek, looking at the lower fall and its frothing pool right in front of me. The creek was swollen then with all the rain the area had been having, making it an even more impressive site than normal I’d imagine. Certainly, this is a most unexpected discovery for having just followed a little path hoping for a fishing hole.

Judging by the stairs and infrastructure, this was once an advertised BC recreation trail, but it has since been decommissioned by the simple expedient of removing all signage pointing you to the trailhead. It’s too bad as I’m sure new campers at Little Bear Bay never see this wonderful fall if they don’t have some guide or old timer familiar with the area to point them to it. But I get why the government isn’t maintaining this. It’s way out there, with only a small campground nearby – not exactly an easy tourist destination. I’m sure happy I stumbled upon this hidden gem!

Even my afternoon fishing trip to Lower Stella Lake leads to the minor unexpected discovery of a dock at the one place where you can fish from the shore. Everything else around the lake is thick brush by the water, assuming you can even get close to the water.

The following day leads to one more unexpected discovery. I had one remaining road I had not gone down to Rock Bay. I didn’t know exactly what it was, thought it might be a light house camp, but it turns out to be some sort of general campground. As the sign said private no trespassing, my hike was cut short. On the way back, I decided to investigate the right branch of the little road that led to the cabin from my first day. It has been maintained too, but not quite as recently as the road leading to the cabin. Eventually it branches again and I take the branch that looks maintained to the left.

I stepped into a clearing with three benches – the closest has a picture of two people sitting on what I presume is this same bench. A memorial of sorts, I think. The middle bench is new, reading “In memory of loved ones lost”. This is not the first time I have encountered memorials for people at view points – it seems a natural thing to honor those past to create a memorial at a location they loved to visit.

The view is grand – showing the Discovery Passage to the north and south at this viewpoint. But the weather was grey and dull. The next rain dump was coming in and the skies were slowly lowering to leave nothing to see.  I could try to come back here should the weather clear and see about getting a good shot in clear skies. It was a good thing I wore full rain gear for the day as the drizzling was turning to full out rain as I headed back.  Back at camp, I waited out the wet weather, there will be at least one day hunkered down waiting for the next rain storm to pass.

Just another blog to share some thoughts with the world.
View all posts by ralph →
This entry was posted in campground, hike, pictures, RV, travel. Bookmark the permalink.