Leaving Fortuna Pond, I set a pin down to the nearest Walmart. The big G decides to take me out another way, down a different set of levee roads. No big deal, I think, it’s more of the same, right?

Well, we start down the first levee road, continuing down the same road that took me to Fortuna Pond. Then the googles tells me to turn left. Left I turn, down a smaller levee. Uh-oh. Narrow, but the real problem is the overhanging trees, no way my rig is going to fit under that. Back up. Almost drive off the levee. Straighten out. Backup again. Almost drive off the levee. I’m sitting on a weird corner, the one side is flattened out and I can’t see where the edge is. I finally line myself up with the other edge well enough to back out.

Let’s go down the flattened side, and drive beside the levee – I see cars way down there, looks navigable. Away we go. It’s like driving through a field, one that has had a sprinkle of rain (irrigation) to keep the dust down. But we trade that for mud, spraying all over my rig. You know I’m not supposed to take this thing off pavement as per my rental agreement? I didn’t know this until AFTER today, going through all the terrain I’ve been through…

But we make it out just fine – going past a bunch of workers picking Iceberg lettuce. I’m sure they think nothing of rigs going past their field, considering how many rigs were at Fortuna Pond. A Walmart run later, we are restocked. I gas up, get that cheap Arizona gas before heading into expensive California gas country. I also finally get some tools and fix my mirror, one Allan key later. Another thing to donate once I’m done with this trip.

The terrain changes as I go along. Yuma is in Agriculture country – there is irrigation all along the Colorado and Gila River, so yeah, Arizona the desert state does actually have some lush agricultural land in the south west corner. I drive back into the desert, this the sandy dune desert most people think of when thinking of desert. That ends, and we are back in Agriculture country again. Welcome to the El Centro area. A long time ago, I worked in research agriculture. We would grow plots down here in the winter time to get two generations of plants off, speeding up the breeding process. I decide to pull over to a rest stop. 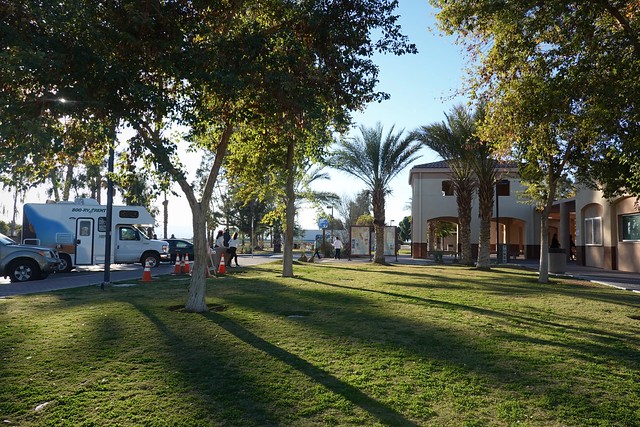 That’s not a rest stop, you might be thinking. Oh, it is a rest stop, just a very nice one – but still no can recycling bins to be found anywhere. I thought California was better than this.

Onward we drive, leaving agricultural lands and entering the desert again. I have been driving towards hills for a while – now we are starting to rise into them. Large windmills spin beside the highway. Signs warn me of strong winds. Reminds me of southern Alberta.

Up we go, past these gnarly looking rocks, huge ass boulders that have been weathered and piled together. The grade is a steady 6% – no problem for my rig, although I am sucking my cheap Arizona gas up quickly doing this. Up, and up – leaving the boulders and returning to scrubby terrain, gradually getting greener and with more trees scattered about. We climb, from below sea level to over 4000 feet. I remember to pop my ears a few times – the pressure change is noticeable.

Now, I wasn’t randomly heading nowhere. Last night since my internet was good, I had researched where to camp. I had checked out the nearest BLM areas to San Diego, not much other than this one spot. Looks like it might work, but it’s way south, long ways off the Interstate if it doesn’t work. Then I see it is only 2 miles from the border with Mexico. I’d be way out on a forest access road, in a rented RV, 2 miles from the Mexican border. Think I might get a visitor in the night? Ditch that idea.

I guess I’m going to go for paid camping – Cibbets is an hour out of San Diego, and $14 a night, with water. Looks nice from the website. Reviews say it is quiet. I needed some water anyways, so off we go to Cibbets. 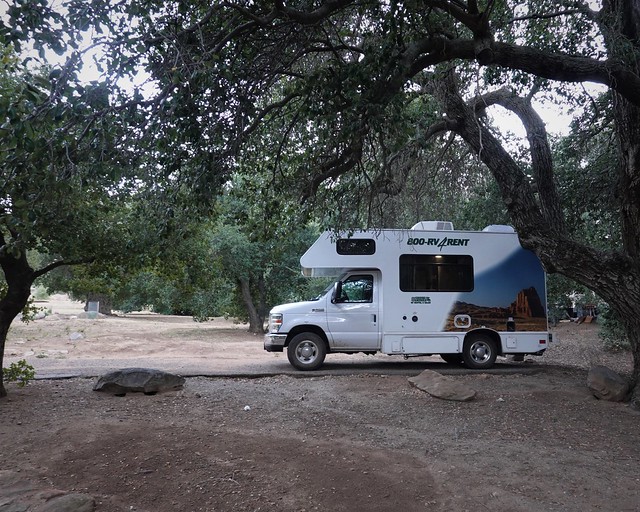 It does turn out to be quiet, only two other campers in the whole place, although it is not big, perhaps 30 stalls in total. Nice trees, and shrubs on the hills surrounding the campground. Park in stall 1. Pay. Setup. Time for a little hike! But with all the driving today, I’m getting pretty close to dark – it’s going to have to be a quick one, and something safe on an easy path. I hike to the end of the campground and see a little road going up to a notch between the nearby hills. Perfect! With the rising moon, I could follow this back even without my flashlight. Off I go, up the path. 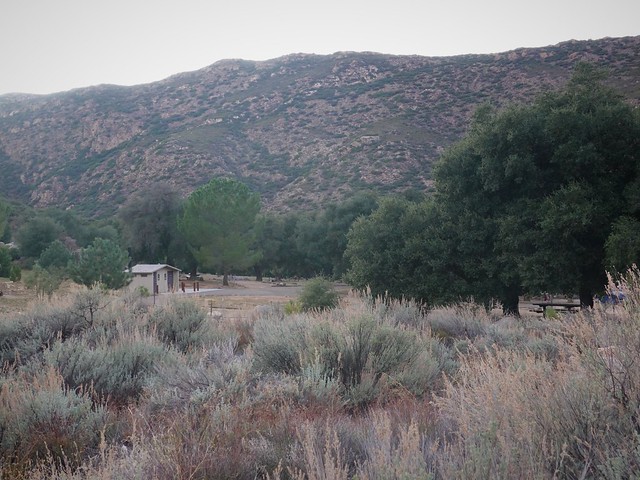 Up the little road I go. It’s not too steep. The terrain reminds me of the TV show, M*A*S*H, which does not surprise me, as we are not too far from where it was filmed – this climate extends north along the mountains here to the site of filming. 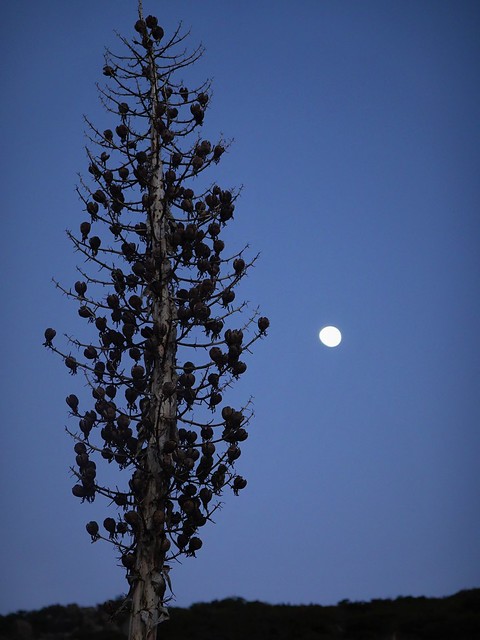 I find strange (to me) looking seed heads – photograph one with the moon for effect. Needed to play around with that one more for exposure, but the light was fading, needed to get to the top!

I pass some youngsters coming back. “It’s not far, five minutes to the top, maybe ten if you go on”, they answer to my query of how far. Good, I’ll make it and be able to get back without being in the pitch black. I get to the top. The view is blocked a bit by vegetation, but there is a trail taking me to the right, looks like a better view. I hike down a little ways, then off to step on a rock and get what view I can in the remaining light. Not much of a view compared to what I’ve had. Oh well, can’t win them all.

I hear people coming from further down the trail. WTF? I think to myself, it’s almost dark, where the hell are these people coming from. They spot me on the rock, I had glanced over quickly to see three big backpacks on them – aha, they have been hiking a long ways, totally OK on their own. They speak up “Hello over there!”, trying not to startle me obviously. But I’d heard them talking long before I saw them. We chat for a minute, they ask about what is ahead and I tell them about the campground, but a thought occurs to me. “This wouldn’t happen to be the PCT trail, would it?” I ask, wondering if I had stumbled onto it. They confirm that it is indeed the PCT. How about that? I had followed Carolyn’s adventure on the PCT for hundreds of miles through the last summer, now I had hiked hundreds of feet this winter on the PCT, by accident! 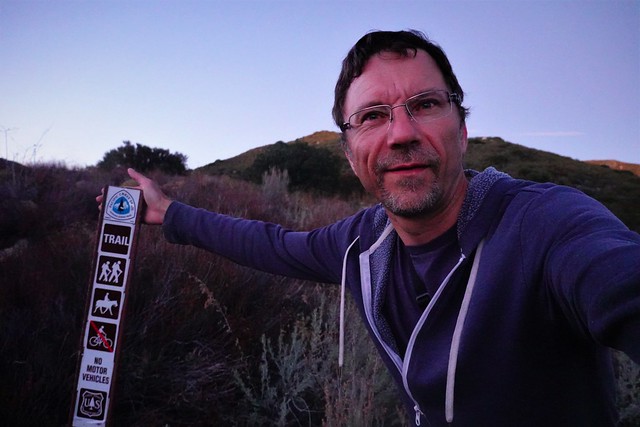 I walk back to the road, seeing the path I am on does cross it. I look more closely at the marker I had seen coming up the road, it is indeed the PCT I am on for a short ways. Well, now I can say I hiked the PCT, even if but a few hundred feet of it. 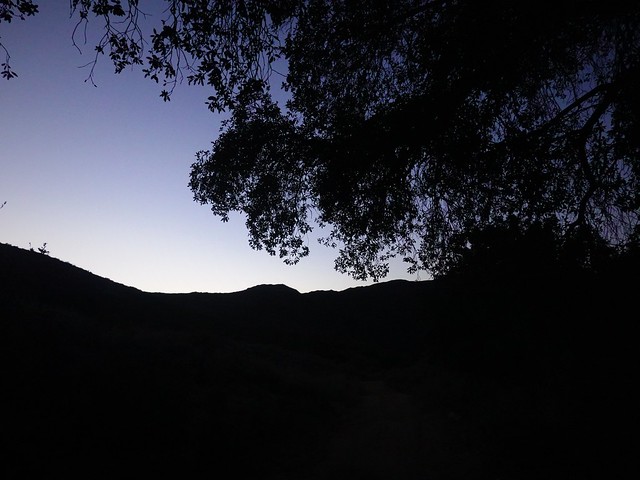 I scurry down the pathway, lit now more by moon than by the fading sky. Time for a late dinner, then an early rise tomorrow so we can get a little hike in before we go and see if we can get to the San Diego zoo. Oh, I will need to renew my $100 20 day/10GB roaming package too, as soon as I get within cell range again, how hard could that be?