Kofa had been been great, but it was time to move on. I’ve only seen one little piece of this magnificent desert park – empty, quiet and mostly unspoiled landscape. I need to return to this place again.

But first on the list, get out of Kofa. My mirror was re-duct taped; looked solid enough to survive the road out, I thought. Yet, I don’t trust it enough to use the driver’s side door – every slam of the door shakes the mirror around like a wobbly head. Would the rest of the rig make it out? Well, we were about to find out!

I drive down the cart path, remembering most of it for the dicey drive it was coming in. But one wash, I stop – that looks awfully deep! Have the cars of the last couple of days dug the road out here a bit? I get out and inspect the deep rut in the road. Not as deep looking on close inspection. I do a couple of minutes of kicking gravel and sand in the direction of the rut, feeling better that I have done some “road repair” Get back in, drive through – not too slow, will get stuck on rut. Not too fast, will break something on rig. I choose my speed wisely and pass, leaving Kofa behind – but I will return, someday!

Yuma was meant to be a one night stop on the way to San Diego. BLM land is much less common down there. Could I find anything to camp free on there? 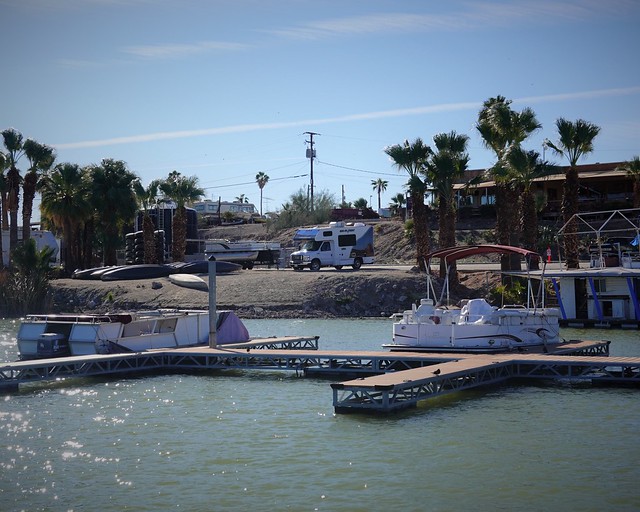 My first stop was Fisher’s Landing, and Martinez Lake. It is your typical recreation community, dead during the work week. I stop by the boat shop, hoping to borrow an Allan key to fix my mirror, but the lady minding the store next door tells me it is closed. Feels like she is the only one in the area at the moment.

I wander down to the lake, now a novelty after so many days in the desert of seeing no bigger water than a swimming pool. My hope is that I can camp in Imperial NWR. Having not had internet until I hit town, I have not been able to research this in advance. I consider doing that now, but what internet I do have is crap. I’m only five minutes from the park, might as well just head over and find out in person. 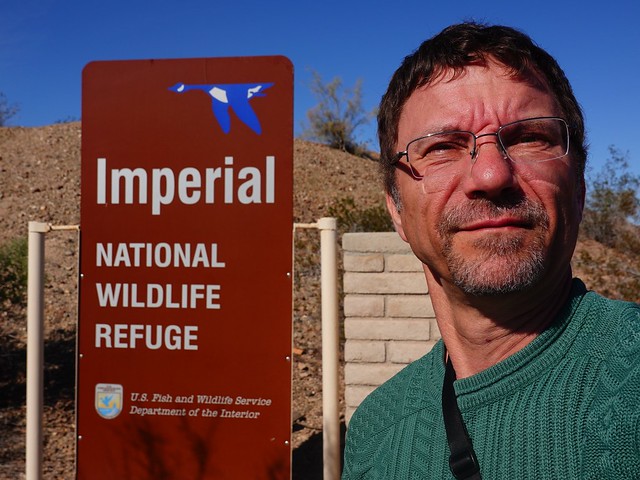 I enter the park, and immediately spot a sign I have seen before down here: a list of what you can and cannot in this park. Crap, camping is not allowed! Well, since the interpretation center is right here, I might as well go in and take a look. 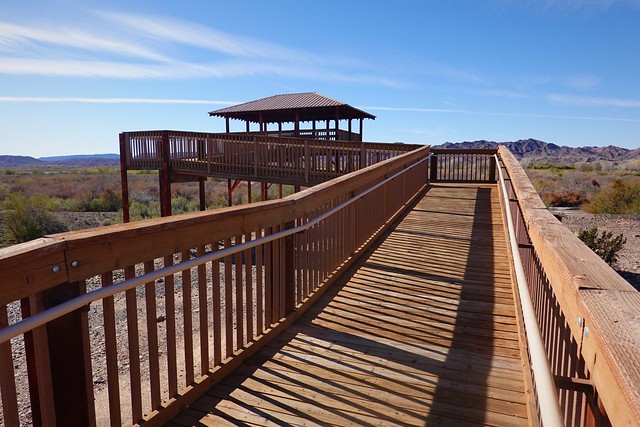 Its a nice little set of displays, including a rock one that allows me to confirm my quarry I found in Kofa was indeed obsidian. I go out to the observation deck, hoping to get data service on my phone to find a different camping spot. No such luck.

I head back to town, and park it where I get a good signal. Check my maps, googles. The pickings are slim. The interpreter at the center told me about “VFW” camp nearby. “It’s great, lots of friendly people and parties every night”. Sounds exactly like NOT my thing. I keep looking, and finally spot a small park called Fortuna Lake. Looks like it could be busy, but there is some other stuff nearby if it does not work out.

I put my pin down on the googles and head down. The first part of the drive is uneventful. But I didn’t really look closely where I’d be driving the last couple of miles to get to the BLM campground. Googles tells me to “turn right” (like NOW). But it is a canal, with levee roads on both sides, which one do I turn on? The map is too far zoomed out to tell. I guess the second one and turn. 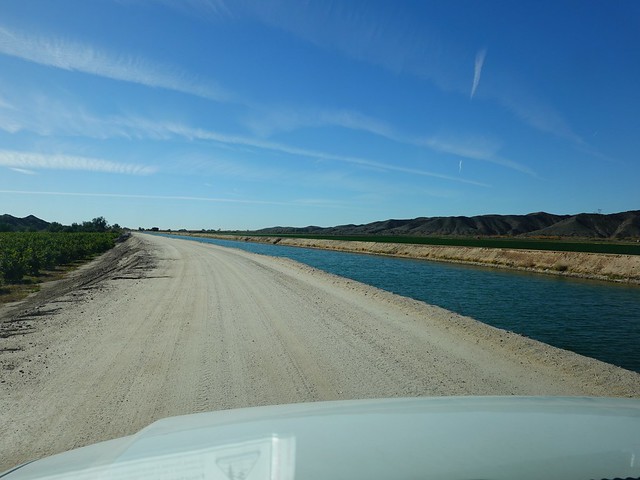 I guess wrong. The levee road is nice at least, other that the occasional erosion gully cutting half way across the road – make sure to veer over and avoid those! Googles works frantically, rerouting me. It turns out to be a simple dive off the levee to the left further up, and cut across where the canal briefly goes underground via a pipeline. Another missed turn on my part, and the google re-re-routes me, back onto the levee. Down I go, seeing my destination ahead. This is more out there than I expected for what is supposed to be a popular place.

I drive in, and see the pond. Googles thinks it is a lake. No, something I can walk around in 15 minutes is not a lake, googles. I drive around the north side first. 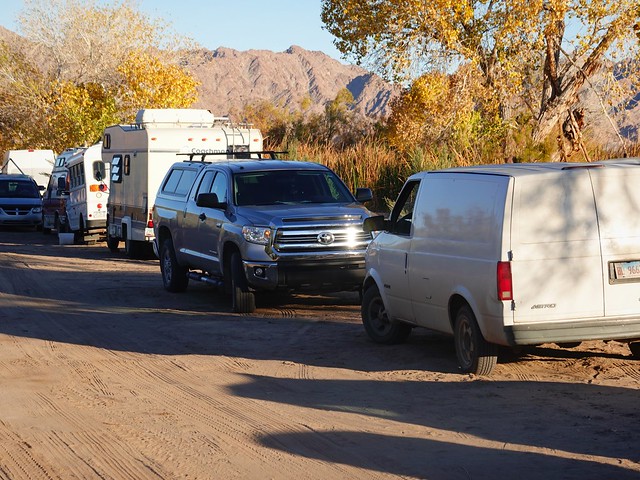 Oh yes, there are a lot of people here, parked bumper to bumper in fact. But it’s close to a small city (Yuma), water, and (for a BLM) has extra services – like a porta potty, and a garbage bin! I drive around to the south side, not a long drive – might as well see all my options. It is a lot less crowded here, plus shade under the trees – dunno why so many are trying to crowd on the north – only advantage is sun for solar, and I don’t see that many solar panels out. 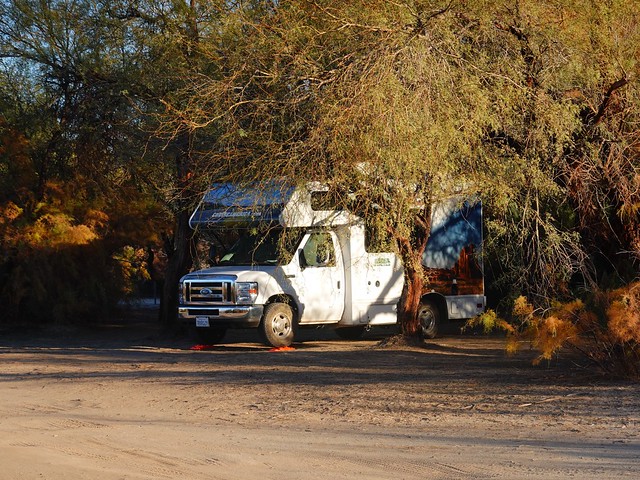 I find a nice spot under the trees, no other people that close by, and the water is right across the road, 100 feet away, not bad at all! Even solar would not be too bad, you’d only lose the first quarter of the day to tree shade. 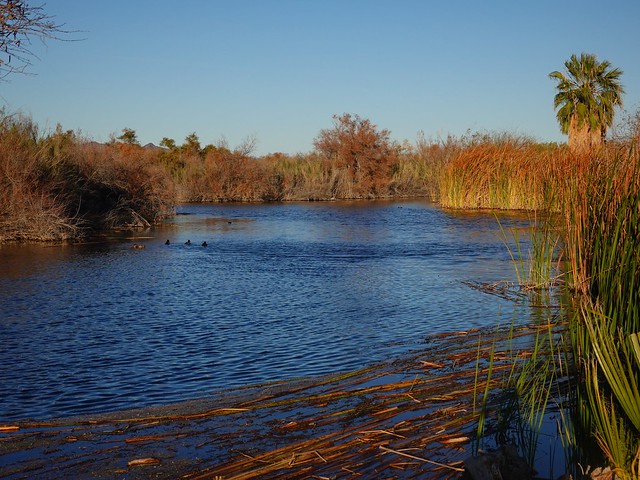 As I usually do now, I setup and head out for a little walk around camp, walking around Fortuna Pond to start with. I quickly see that the area is hemmed in by the Gila River on one side, and the irrigation canal plus agricultural fields on the other sides. There is not that much else to walk to around here. 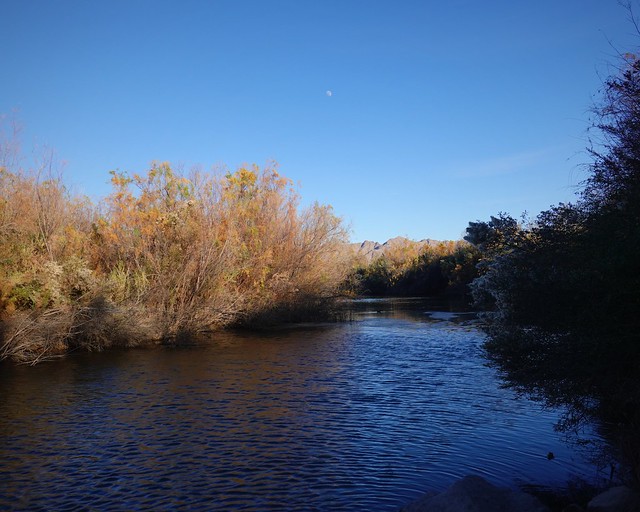 But I do find one track leading off in the dense vegetation down here. It terminates at a private spot with no one in it at the moment and the Gila River right beside it. Darn, I could have setup down here if I’d known about this. But I’m only here for one night – not moving now. 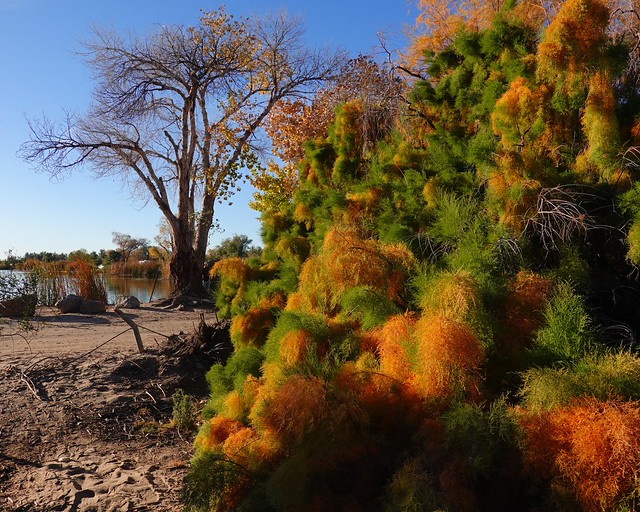 I admire some of the fall colors down here. I did not know that some of the foliage is yellow here in the winter. I can only assume that it falls off and new foliage appears in the spring. But it is pretty in the meanwhile.

The next morning, I’m up and outside just after sunrise. I’m going bird hunting! Not with a gun, but with a camera. Won’t disturb the neighbors that way, plus it’s so much quieter. 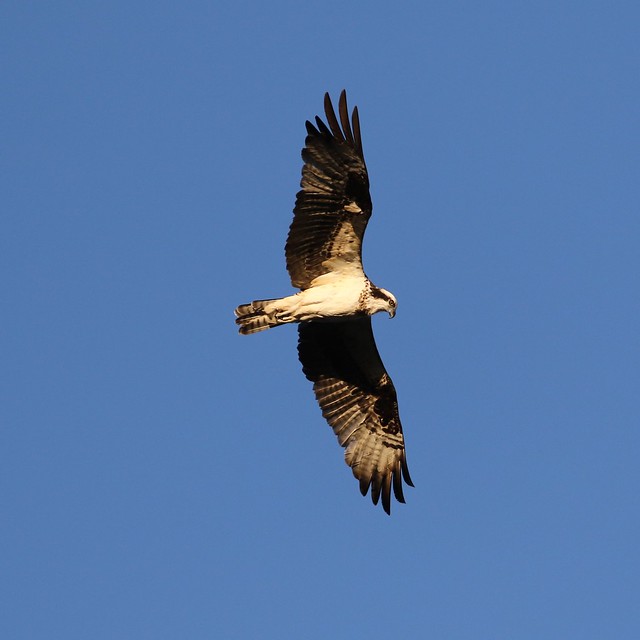 The Osprey circle about, just need to find a good place to catch them in the sun and wait for them to come close. Still, I took twenty pictures of which five were what I had to pick from to post. Shooting birds is hard. 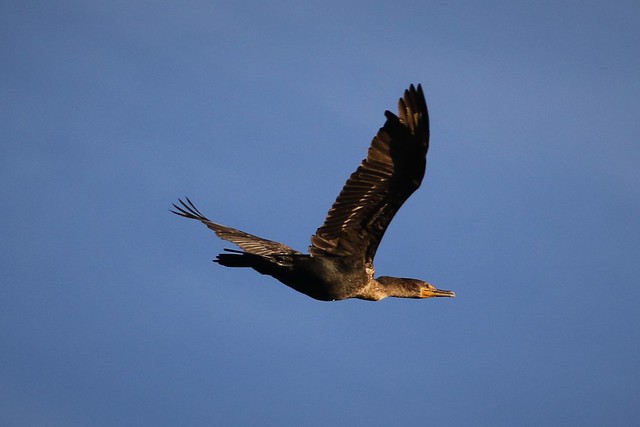 The Cormorant (still not totally sure about my bird ID), is more difficult – they are a bit more shy and tend to take off from the water and circle around farther away landing. But I eventually get a decent picture of them too. 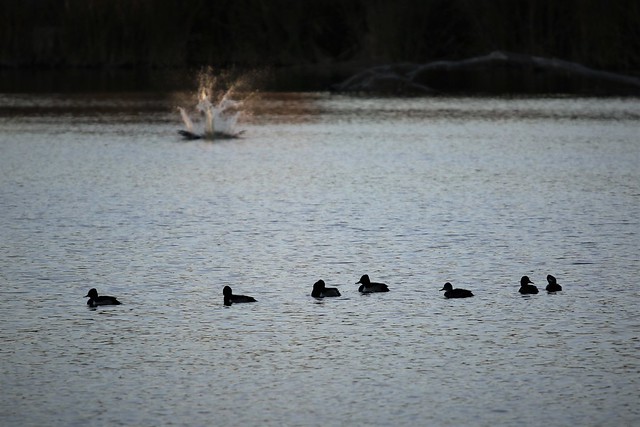 While photographing some ducks, I hear a splash and see it in my view finder – and Osprey has just dived in trying to catch a fish! I zero in on the Osprey, hoping to snap some good pictures of him pulling a fish out of the water. 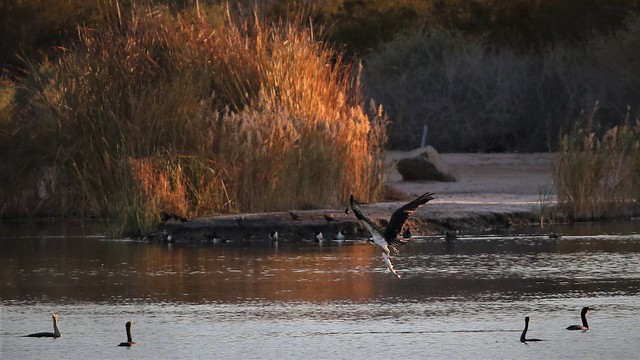 He is a little far away, and the sun had not risen far enough to get the bird in the light properly, but you can see he has a pretty good sized fish for a meal there! I chatted with a retired Fisheries Biologist, of all things, afterwards. He told me they had just stocked the pond yesterday, so the fishing birds were having a major hunting session cleaning out all the stupid fish that had not figured out to shelter away from the open top of the water yet.

As I was finishing my shooting session, I come over to the facilities for the campground. It consists of one porta potty, and one dumpster. These are two things you normally do not have on any BLM camping area, so this is luxury, by BLM camping standards. But it is a catch-22: Services are provided because there are so many people and even a few people crapping in the bush / throwing their garbage in it would make a total mess of the area. But the services bring even more people, putting more stress on the area. Charging would be a sure fire way to solve that problem, but you’d have to charge at least $5 a night just to cover the administration of the area. Then people would crowd the next best space. Eventually you would just have to not allow any camping anywhere other than designated paid spots, if the number of people out doing this just keeps increasing. The desert is NOT infinite, limited access and suitable spots do tend to crowd people to specific areas. At this point, there is still a lot of good areas, if you are willing to get further away from civilization, and cell signal.

While checking out the services, I see a garbage picker going through the bin. I ask how he is doing. “Oh, I’m finding all sorts of stuff, bottles, new items, even money!” Money? Is the USA so rich they can throw that away too, I wonder to myself. I ask about recycling options, having held onto a bunch of cans hoping to recycle them at least in California. “We got another war starting, yet metal prices are in the tank.” This was just after Trump had killed an Iranian general, and them firing back with a bunch of missiles, carefully missing any actual US bodies in the process. Chatting with him about war showed me how far away most people are from the reality – when the thought turns to commodity prices first, well, you must feel pretty secure that any war is not going to come to your doorstep. Not to mention not thinking about lives lost anywhere else.

With that, I strolled back to my rig, enjoying the early morning sun. It was time to leave this place, head west – to San Diego!

Just another blog to share some thoughts with the world.
View all posts by ralph →
This entry was posted in pictures, RV, travel and tagged RV desert travel. Bookmark the permalink.