A Late Afternoon Stroll to a Quarry

I had re-duct taped my mirror, re-applied ointment to my head gash, and re-evaluated my second hike of the day. I felt I was good for a small hike to my southeast, down a cart track cars were banned from, perhaps climb the small hill that the road looked to end at. 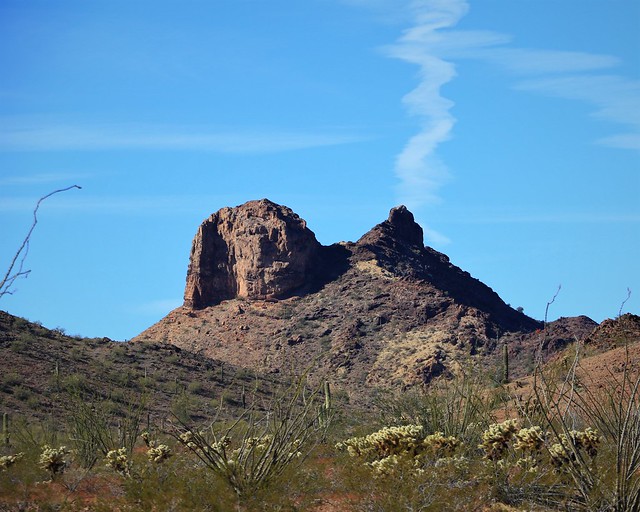 I had also re-evaluated my view from the end of my hike a couple of hours previously. Yes, the mountain does look like the head of a Pharaoh, and the column with the contrail definitely looks like smoke. I do not have a concussion. 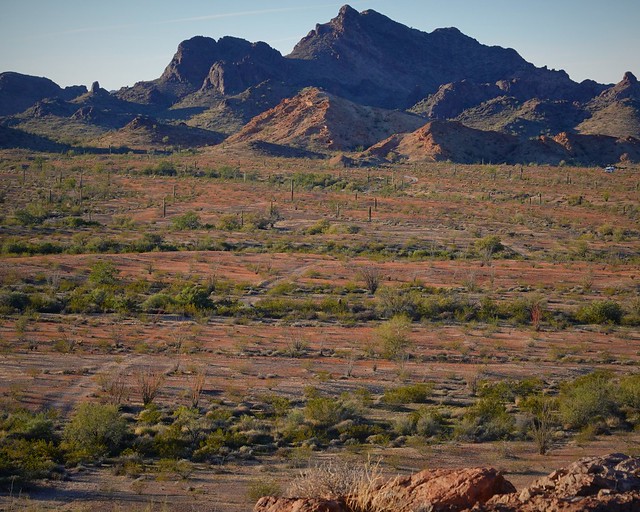 It was an easy hike, up and down into washes and over small ridges. The track was faint in places, but easy to follow compared to a faint trail. I figured if I pushed the time a bit for coming back in the dark, I would have no problem following this. Not to mention, I have my tracker app, if I really managed to lose the track, it would show me the way back. I had a plan, and a backup for my return to the RV. 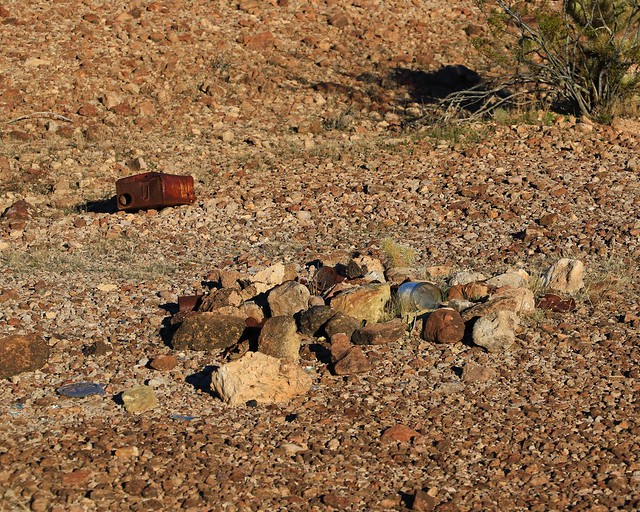 The cart track seemed to head just to the right of the little hill I was going to. I see the remains of an old camp – on the last flat spot before the hill ahead of me. I see now the road goes up the right side of the hill. 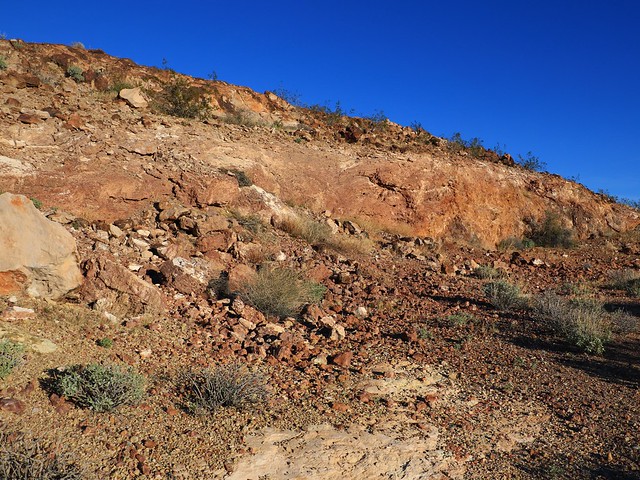 I climb the road past the last brush, revealed before me is a rock face to my left that obviously was an open rock face mine of some sort. 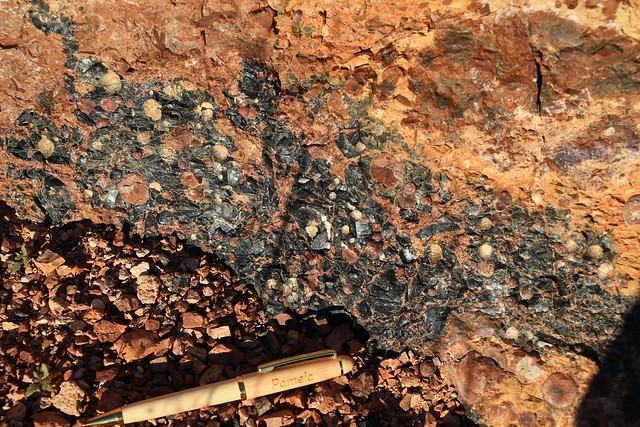 Ah there we go – this looks like the target of the mine – I have seen a few little black rocks around that look like Obsidian – this is all that remains of the vein they were mining. 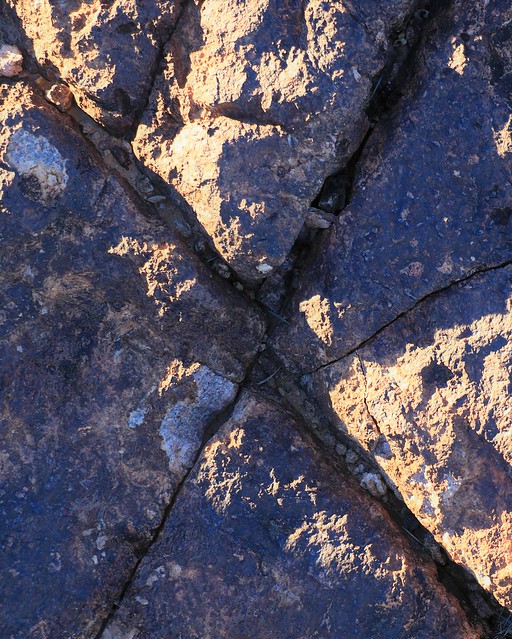 I climb around and find rocks that look like they might be hiding an old cache of something. Gold? Money? Jewels? I move rocks around and scrape the dirt. There is nothing, of course. The “X” I find in the rocks is mocking me, why would I find anything here? It would be a fluke indeed!

I walk my way around the hump and find the tailings. One is just overburden, the rock that was on top that is not of interest and is of no value. 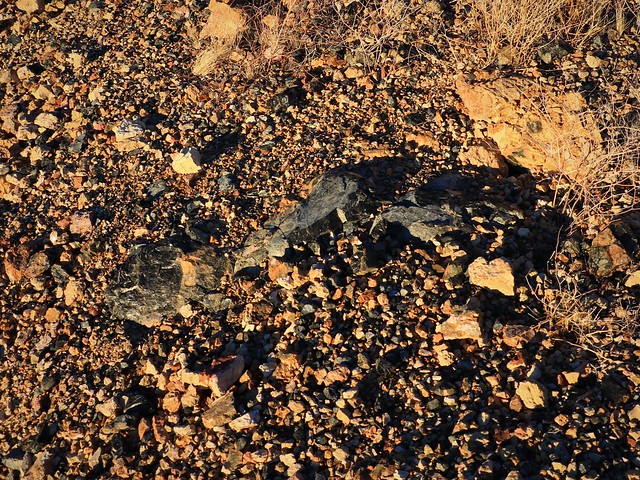 The next pile is where they had the valuable Obsidian, while they got most of it, there is still lots of bits remaining in this pile. It’s all very shiny and pretty stone. 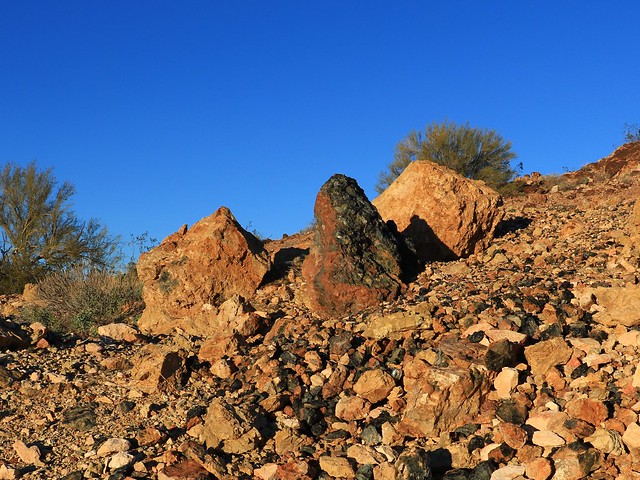 The end of the pile is marked by three stones, one a large half obsidian rock. It’s an impressive piece; would make a great rock garden addition. You can’t have it – it’s part of Kofa now; you must come here to admire it’s beauty in its home.

Impending darkness chases me out of there. I have seen everything there is to see here anyways. I march back in good time, enjoying the fading light as I return to my RV. Tomorrow morning I pack up and leave. I hope the road is kind to me and lets me pass without more than another scrub scrape on the decals.