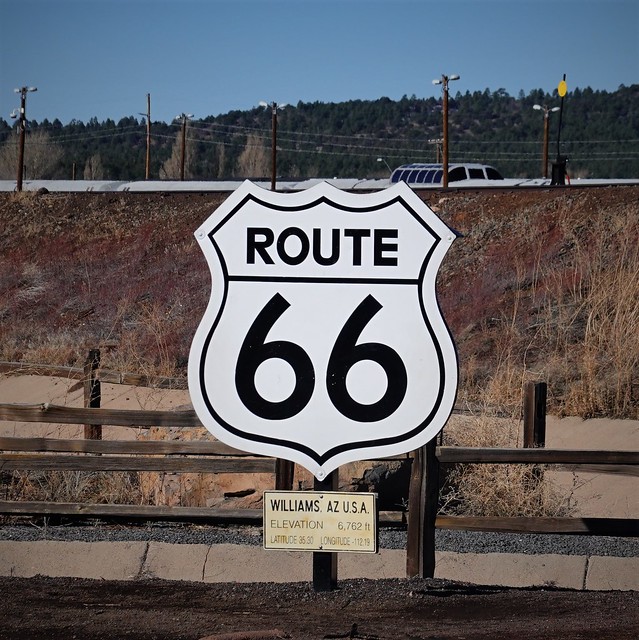 I leave the Grand Canyon reluctantly, not only because I am leaving behind such a natural wonder, but that I am going on to my last travel leg – heading south towards Phoenix and my return home. I had no plan beyond that, due to lack of internet signal. I decided that I would head towards my “plan B” site from my planning to get to the Grand Canyon, then south on the 93. Once I had some Internet, I could plan more specifically.

I drove south out of the park, expecting to hit internet signal pretty quickly, probably at Tusayan, the little town just outside the park. Checking my phone, I see nothing. Oh well, probably the next town, Valle, would have service. Still nothing. It seems AT&T (the service my cell provider roams on in the USA) sucks in this part of the world. Consulting my coverage map, I see that there is pretty much no AT&T coverage north of the Interstate 40 corridor. Good to know if I want come back here exploring again. But thanks to that little quirk, I had to go all the way into Williams before I had a proper internet signal again. I end up at the little historic railroad / Route 66 sign area. It seemed I was going to visit something on route 66 just by randomly stopping off where I had internet. 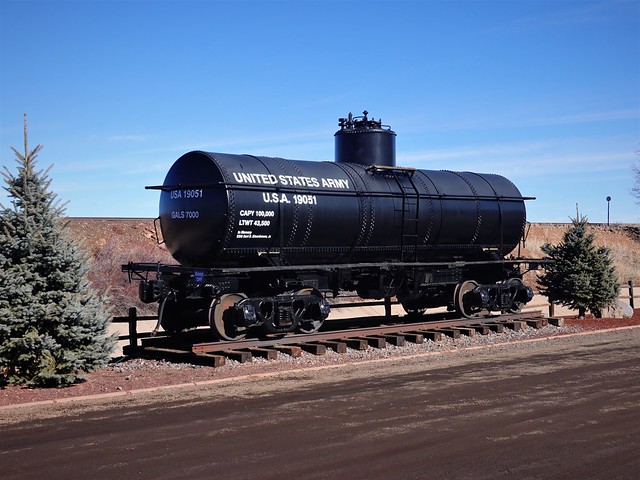 I learn from reading the historic signage that Williams has the dubious honor of being the last place the Interstate 40 was completed to bypass Route 66 going through the town, in 1984! Yes, being at the turnoff to the south rim of the Grand Canyon, I’m sure tourist trade was a big thing here. I’m also sure the resistance to bypassing the town was fierce – business will take a downturn as soon as you have the option of driving by at full speed without slowing down and passing by every business on the main drag. You need to now build destinations off of the highway, like this little Route 66 signage, and this nicely restored tanker car, to lure people off of the highway for a tourist stop.

I proceed down the road, looking to fill up with gas and buy a few groceries to fill in the holes to get me to the end of my trip. Shopping now takes on a new way of thinking – what could I get buy without, so I’d eat up what obviously was more than I needed for my few remaining days here. The town was quite busy for a Sunday – I ditched the first place I had selected for gas as being too busy. The Safeway had to be parked at despite being busy – Williams is not a large enough town to have a selection of large grocery stores. Driving around, it looks like Williams has managed to retain a good tourist trade – being the first major town coming out of the Grand Canyon is still a good strategic point despite being off the Interstate. Ironically, I end up going back to the Interstate to fill up with gas, fewer people at the gas station there, and same lowest price. Thanks Gasbuddy, you saved me some money, showing the cheapest places to buy gas again!

Done with my last shopping of the trip, I proceeded west on Interstate 40, then south onto Highway 93. This route took me south one route further east than I had come north, on Highway 95, so I was travelling in new territory again. Having been on the internet in Williams, I had confirmed my initial plan and now was heading south of Wikieup, to check out camping on Signal Road. The lower elevation would be warmer, keeping me safe from any RV freezing temperatures. 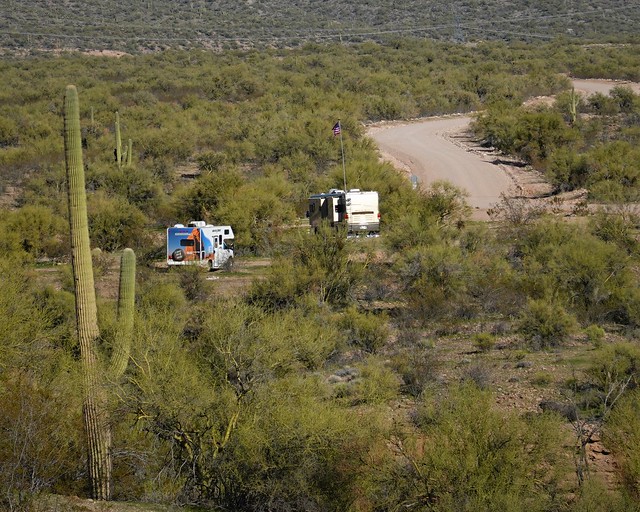 I find the spot no problem based on freecampsites.net. There is one additional large class A RV parked there, flying the US flag high up on a pole attached to the RV like others I have seen down here. I knew Americans like flying their flag, but until I saw something like this, I didn’t realize how far some will go to fly the flag – I’d settle for a small flag on the radio antenna, not surprising for a more understated Canadian.

Having had a fairly easy day of driving, it is still early – time to head out for a little walk and see what is around. Consulting my topo map app, I see that there are some mines nearby, down Signal Road and up a “Jeep Trail” as the topo map terms it. Looks like a pretty easy walk, let’s go for it! 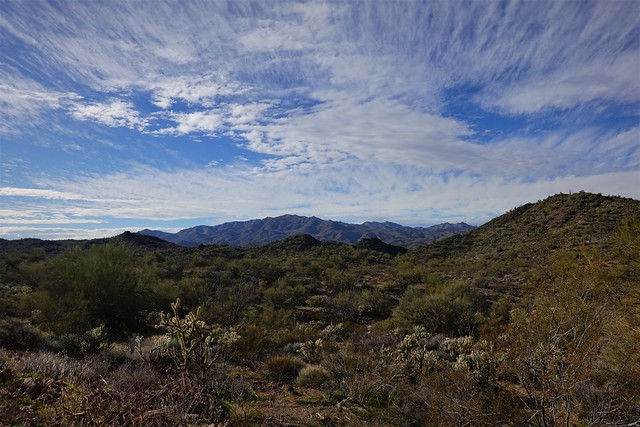 I walk up the road, marveling at the nice rolling arid terrain here. The clouds today make for great pictures with the horizon half way to show the great terrain and the clouds in equal measure. 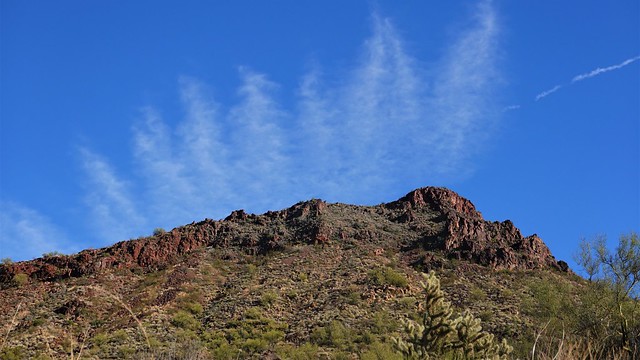 I climb up the road west, passing the hill I wish to go behind to the south to access the mines. I am watching for a turn off. There is a minor path where the topo map says a Jeep Trail exists, but I’ll go a little further on to see if there is something more. 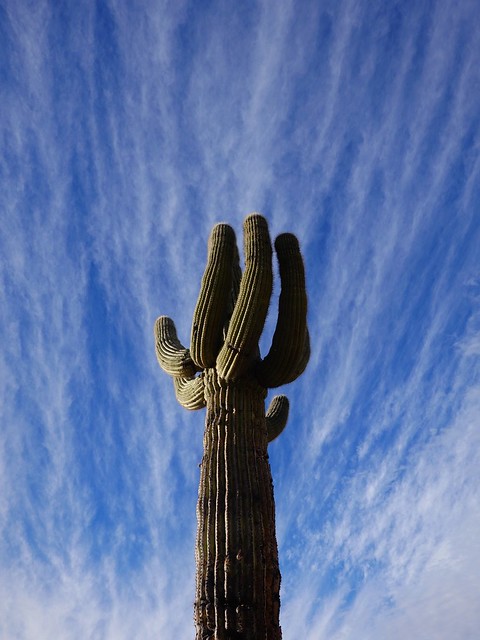 I pass by this big old Saguaro, so tall it appears to be drinking in the clouds passing by. I’ve seem thousands of these now and they still fascinate me. But I see no better road having clearly passed the cart track now according to my topo app. Back I go, having to leap across the ditch of the well maintained Signal Road, onto the barely visible cart path going up to the south. 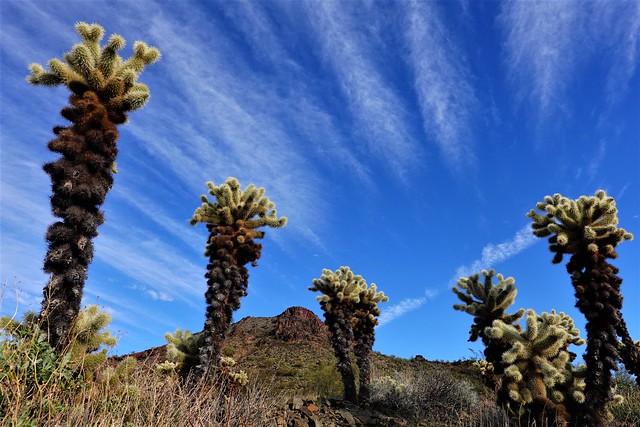 I see what are clearly piles from previous diggings with some interesting rocks off the path. I wander around a bit, and notice I am back in in Cholla country – time to pay attention to the plants around me as I don’t want these stuck to me again! But they are pretty framed up against the hill and sky behind them. 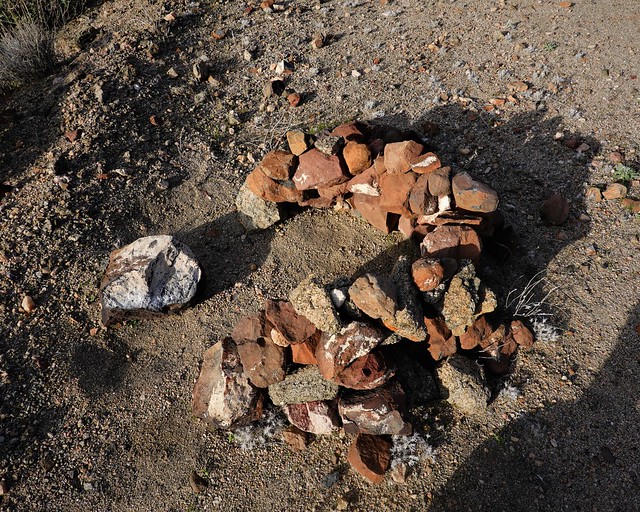 Onto the road again, I spot this marker. A ‘U’ with a rock at the top. Which way does it point – up the hill with the rock, or are we looking at an arrow where the ‘U’ represents the pointer? Mu gut tells me the rock points the way, at least there are more interesting prospects that way. 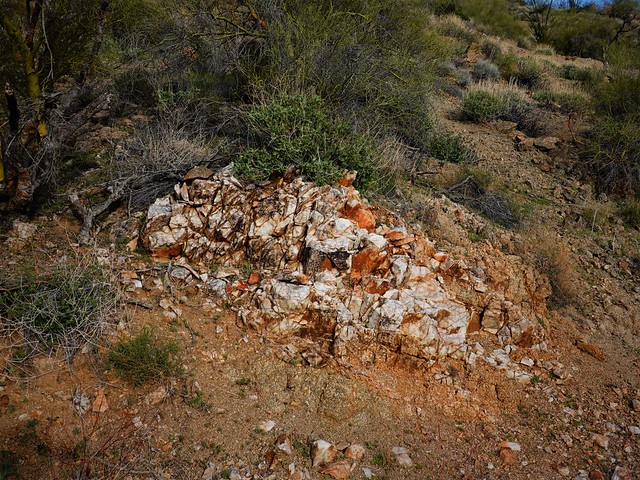 There are white rock veins sticking out here and there. My previous explorations have taught me these are of interest to prospectors, for what may be mixed in with what I think is white Calcite rock. There definitely has been some activity out here, with me passing what looked like a little camping area, and piles being scraped up here and there. 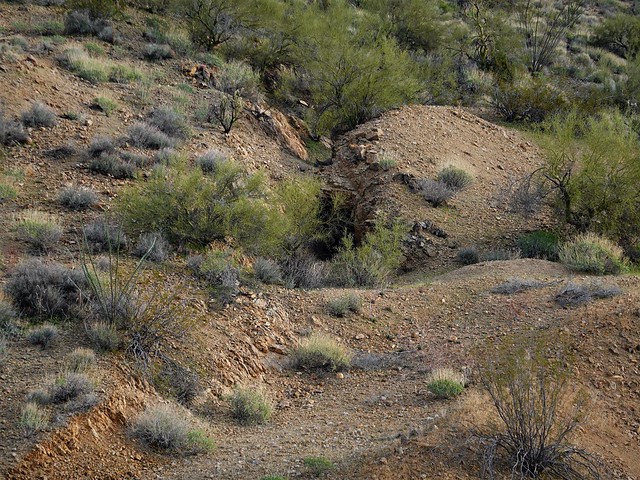 I spot ahead of me a definite hole – that is a mine ahead of me! There are rock piles around it of what they dug up, no natural hole this one! I have to backtrack a bit and pick my way down to the mine hole. 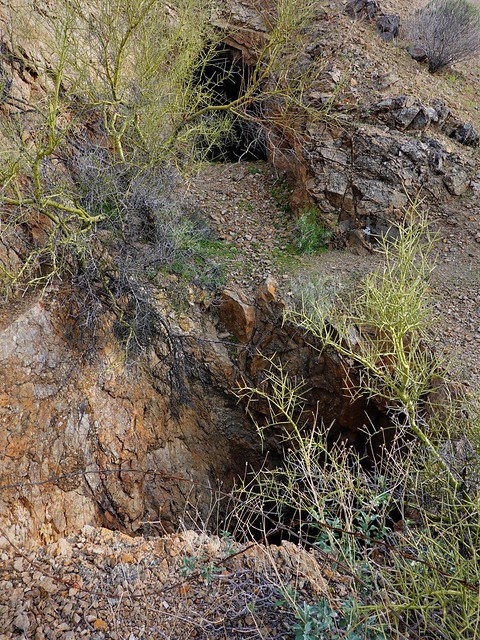 Walking up to the mine, I see there are in fact two holes, one going down that I would fall into had I not seen it, and one going in horizontally that I had spotted in the distance. Goes to show you, one must watch carefully in these parts or you could end up falling in a hole you didn’t spot in time. That little bit of barbed wire was all the barrier existing between me and falling in that hole. 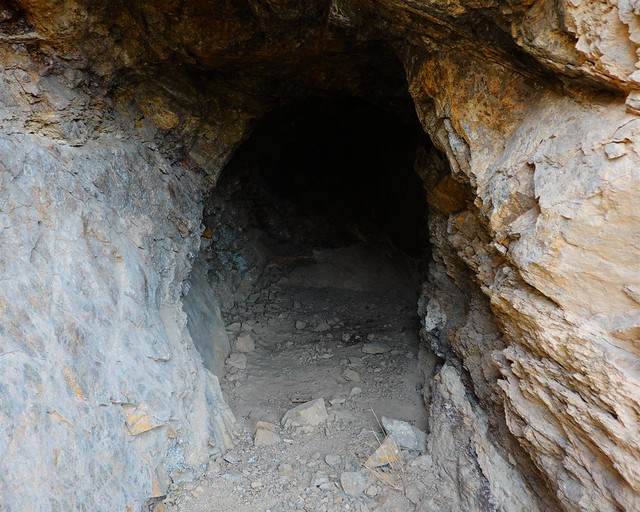 I inspect things carefully and conclude I can safely get around the hole going down and inspect the entrance of the horizontal shaft. The rock looks and feels pretty solid. I can just see the end of the shaft – it goes in perhaps ten feet into the rock. There is a glint of something in the back – perhaps a remnant of what they were mining here. Do I dare go inside? 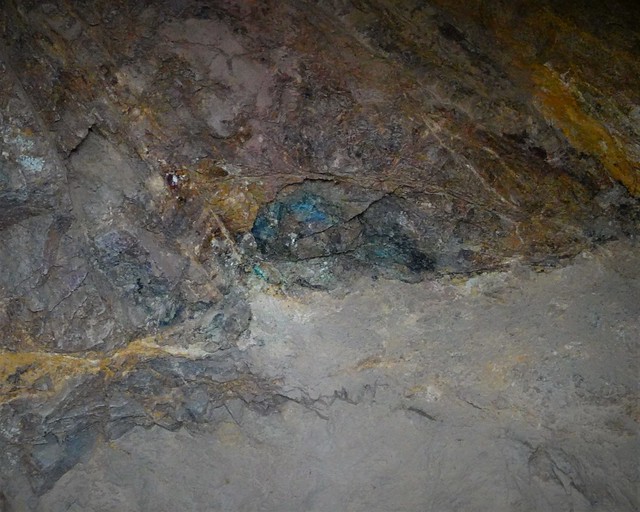 I decide a quick trip inside is worth the risk, heading to the back and getting a photo of this glint – turns out to be the bluish color of a copper oxidation look. Not the glitter of gold, but pretty. I manage to collect a few small bits laying about, and high tail it back out of the cave, being mindful to remember the vertical shaft right at the entrance that I needed to avoid coming out! 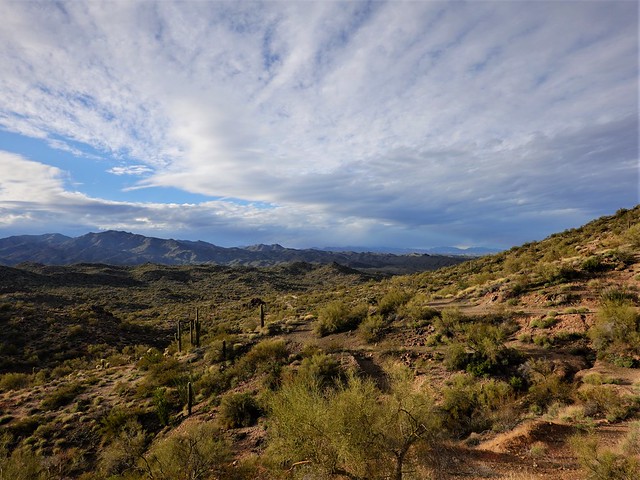 I can see part of the appeal in prospecting and mining in the area. While getting rich discovering the mother lode is the main objective, being in this gorgeous scenery is a guaranteed payback for being out here. 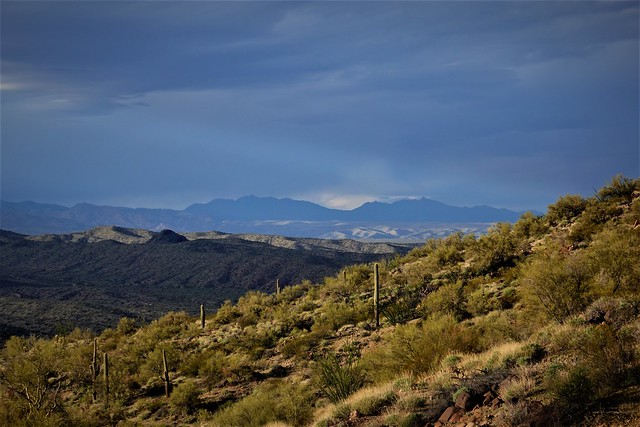 There is more to explore in the area, but looking to the north in the distance I see darkening skies. I’m not in danger of being stranded out here in the rain, but I don’t particularly want to come back soaked, so my further explorations are put on hold and I start heading back down the Jeep trail. 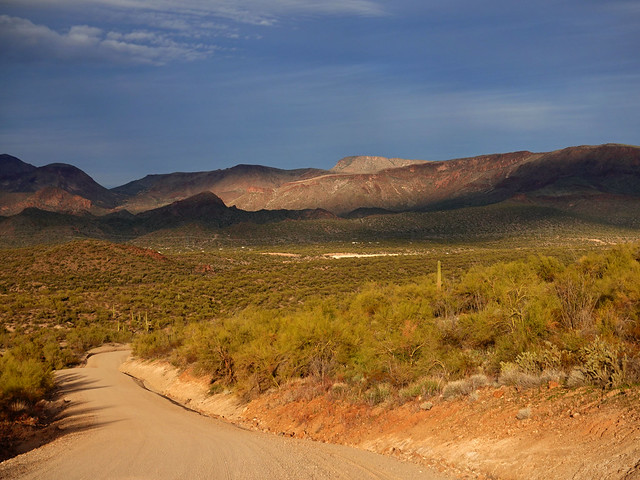 Watching the darkening skies, I see the light shining about like giant ripples as the clouds travel over. An incoming or ending storm can be a great time for light in photography. I head back down Signal Road, looking at the changing light as the clouds come closer. 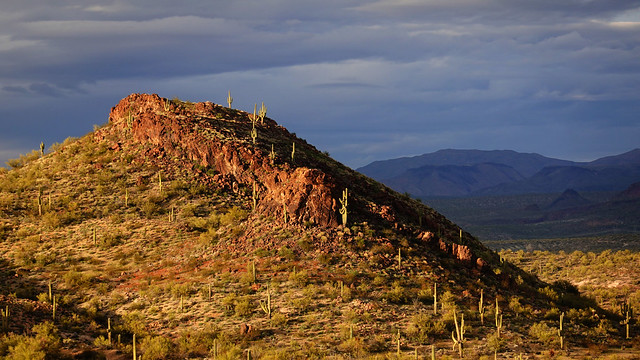 The sun low in the sky also makes for dramatic light on the red hills and the Saguaro. I’m only a few minutes away from my rig now, happy for the dramatic skies, now that I know I won’t get wet. I get back just as the first drops of rain start falling. 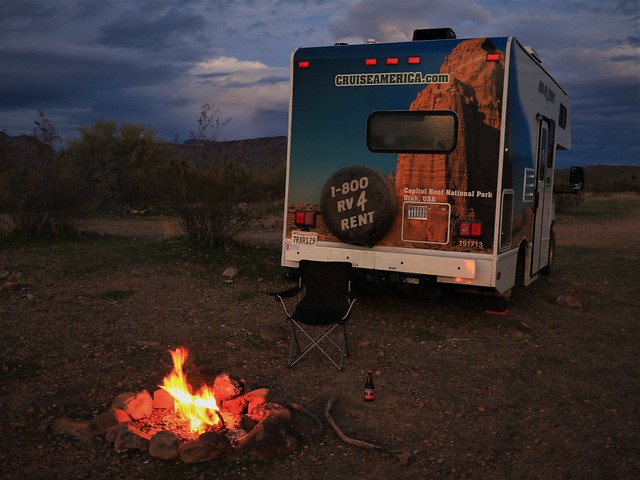 The rain turns out to be brief. I am able to enjoy my 2 hour fire log fire (they really do last for 2 hours) in the quiet of the darkening skies. My A-class neighbors never so much as pop their heads out of their rig. That’s fine – more quiet for me.