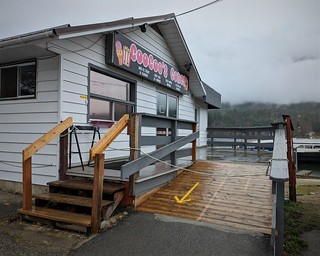 The ice cream shop of my childhood vacations

I had left Box Lake, heading south towards the US border. My next stop was planned to be near Creston, BC. But my choice of camp in the official recreation site was far up the river, past the cell service and possibly in the snow still. But I had checked Free Roam and found an ‘unofficial’ Goat River site on crown land much farther down the river, within cell service. There would be no snow down there, I hope. But in the meanwhile, I had a drive through some familiar territory from my childhood. 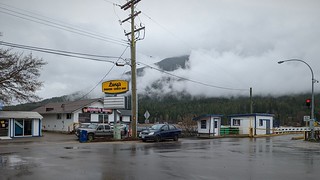 Lang’s by the Balfour ferry terminal

My drive south took me left at New Denver, along highway 31a to Kaslo, then down the 31 to Balfour along Kootenay Lake. I had been through most of this area during my vacations over the years. As a child, I spent several summer vacations in Balfour. I have fond memories of playing  in the water, on the shore, and going for ice cream at Lang’s. Lang’s marina was our stop for gas when I used to go fishing with my Dad in the fall, and still the occasional ice cream cone! While the sign for Lang’s is still there, the restaurant  is out of business, according to some googles reviews. Hopefully post COVID someone can pick this up and start again.  The ferry terminal is a good location to pick up some extra business while people wait for the ferry, which even now was full!

But this time I had been smart and arrived early, knowing that only the smaller “Balfour” ferry might be running. The larger “Osprey” ferry can carry quite a few more cars, but is down for maintenance around now at the low season. However, demand has increased enough that one smaller ferry can not take all the load during the week. It was a good thing a local had reminded me of the ferry issue, I might have cut it a little closer and been left waiting again otherwise. There were a couple of semis waiting to get on – only one would make it. If I had been there ten minutes later, I probably would not have made it on either. 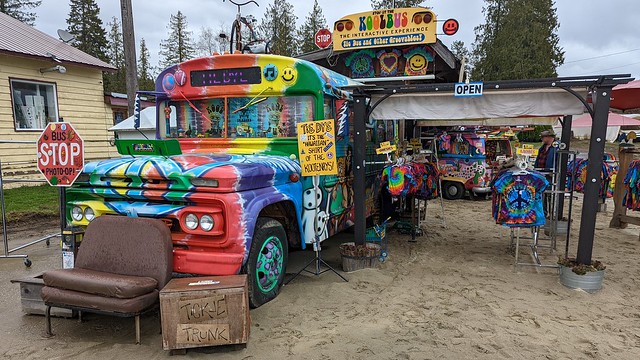 Note the sand beach installed around the bus

I had some time to wait arriving early for the ferry. Not many businesses are open right now, but one of the newer ones (in my timescale, anything after 1990) was open selling groovy tie dye products. I don’t need any of that, but his bus made for some colorful pictures in what was a dull grey day with occasional drizzle. To add to the California vibe, the bus even has sand all around it. If you could surf on Kootenay Lake, he would sell surf boards I’m sure.

I only took a little walk down to the water below Lang’s as it was drizzling lightly – not that pleasant outside. Had I arrived earlier, I could have gone for a beer at The Dock ‘n’ Duck, but it was still before lunch – drizzly mornings are not my favorite beer conditions. I wait in the RV and watch the Balfour ferry arrive. There is a discussion about how to load as many vehicles as possible – the ferry will not hold all of these, including the two full sized semis that are waiting. I pull in behind the one semi in the middle lane that does make it on and get stopped short of pulling up. A couple more vehicles go by into the right lane. There is more discussion, and then they ask if I can pull into the left lane instead. This requires me backing up, off the ferry part way and back on. Good thing I am mostly used to this rig by now. With some crew guidance and my backup camera, I make it back and over into the left lane without incident.

I think I’m all done and ready for the ride after a Honda Civic pulls up behind me, but suddenly I hear a bang that reverberates through the RV. It seems I’ve been hit somewhere, perhaps a car coming in the middle lane? I check my rear camera and find the Civic seems to have moved up to zero clearance with my bumper. An outdoor inspection with myself and the ferry crew confirms that the Civic moved forward, hitting my bumper. The driver apologizes, saying he thought the electric parking brake was on. We all look at the damage as the Civic backs up off my bumper. I don’t see so much as a scratch on my bumper. When the Civic backed up, I could see his bumper had caved. He’s in for at least a grand of repairs if he chooses to maintain his car’s impact integrity. It was an expensive driver error – not putting the car in park and no electric handbrake. I’m just glad I’ve got no damage – I didn’t want to have to deal with that now!

I was reading on Wikipedia just now about the ferry service, it seems the Balfour is about to be replaced by a new ferry. That may have been my last ride on the old girl – 1954 is getting pretty long in the tooth for a ferry. With the sinking of the MV Anscomb not long after it’s decommissioning in 2000, that will be the end of the ferries that took me to many happy memories as a child. 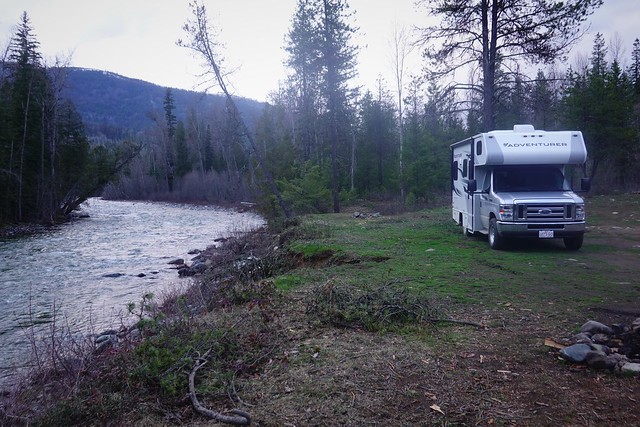 Boondocking by the Goat River

The rest of my travel across the lake and driving to Creston is uneventful. The ferry ride was on pretty choppy waters – I can only recall a few times the boat has rocked like this going across. The skies are low and the drizzle continues – no pictures on the ferry or going down the lake this time. Creston is my stop for groceries, and my prescription. I had it moved from Port Hardy and fortunately it worked, my refill was waiting for me at the pharmacy. A few groceries and a liquor run later, I am heading out of Creston to Goat River. It is only a half hour out of town – I find the open spot where most people camp easily. 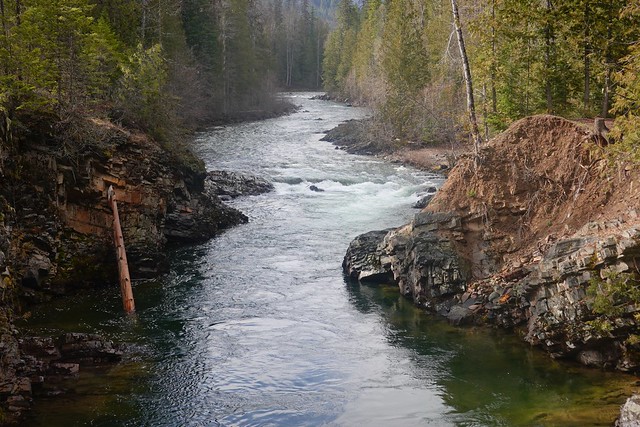 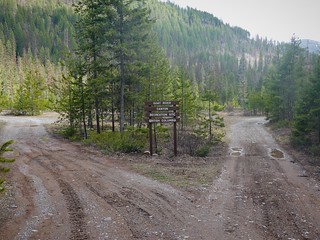 I’m only staying for one night, but I am there just early enough to take a hike further up the road to the actual Goat River Canyon Recreation site. It is a long hike up the road, made a little longer with me exploring some possible boondocking spots further up the road (not great spots). I do indeed hit snow as I get further up the valley, not much but probably just enough to keep my RV out. Another week and you’d be fine here. I cross the Goat River shortly before turning off into the rec site. There are some nice fishing holes down there, if I was staying longer, I’d try my luck with the rod for sure. The recreation site is more open than I expected – there is a large meadow with the pit toilets in the middle, and the sites along the edge mostly. You’ll get lots of sun but no cell signal here. 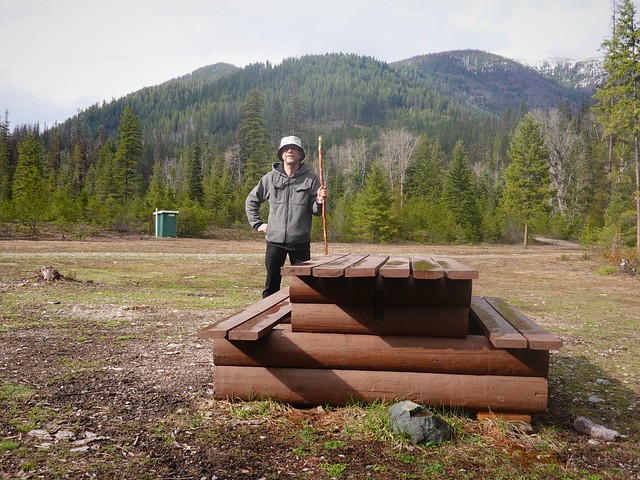 It’s a pretty open site, everyone can see you going to the toilet

Since there was a convenient log to put my camera down on, I take the self portrait opportunity which also shows you the campground view. I wished I would have had a bit more time to explore around the campsite, and at least go down to the river, but I had extended myself out to the maximum for walking time. I walked around the loop, stopping for a five minute site at the picnic table, the back down for an hour and a half of walking again to my rig. 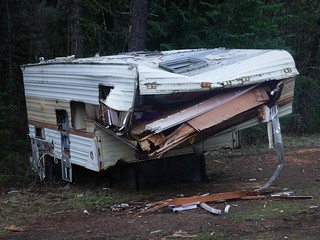 Arriving back, I contemplate the junk left behind, my second wrecked camper I have encountered abandoned. This one still had some usable parts. I actually took a sink stopper, hoping it would be the right one for my bathroom sink, but no luck – I’ll stick with the rubber generic stopper that works well enough. There is no one else in the camp for the night, and the road nearby is quiet, although during the day quite a few people went up, just going for a little drive it seems. Having cell signal down here allowed me to plan my first day in the USA – I was going to try for some boondocking near Butte, Montana. I slept my last night in Canada for a while. You’ll have to tune in next time to see how my first day in the United States of America went!

Just another blog to share some thoughts with the world.
View all posts by ralph →
This entry was posted in boondocking, campground, pictures, travel. Bookmark the permalink.