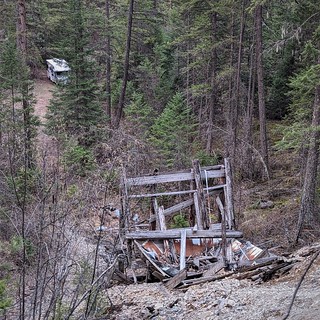 Where I ended up

The day had come for my first time crossing into the United States of America by vehicle. While I have done the trip a couple of times flying, I’m still a newbie when it comes to travelling to the USA. I had eaten/processed all my fresh fruit and veg. I knew where I was from. I knew where I was going. I was set for the border guard questions. I was planning to travel to boondocking near Butte, Montana. I ended up changing my mind at the last minute.

I had stopped for the night near Creston because it was close to the US border. I wanted to get the crossing done early in the day, just in case there were issues. I drive south of Creston, approaching the border a short time later. This isn’t a major border crossing – I wasn’t expecting long lines early in the day, but you never know! Sure enough, there was all of one car in front of me. I waited a couple of minutes, then pulled up. I hand over my documentation, and wait for the questioning.

“Where are you from?” Calgary. “Where are you going?” New Mexico. “What are you doing there?” Visiting a friend. “So why are you coming down this way?” That was the first question that had me pause for a second. Of course, being from Calgary, coming through Creston would be a huge detour. I explain that I’ve been on Vancouver Island for the winter and was heading down from there. That seems to satisfy the guard. “Is this vehicle registered in Alberta?” Yes. The guard goes and checks the plate out. Coming back, the questioning continues. “Do you have any fresh fruit or vegetables?” No. “Do you have any Citrus, oranges, or lemons?” No. (I had eaten oranges for breakfast. My potatoes were cooked and frozen, technically a violation, but I’d have pleaded ignorance as I didn’t know only commercially processed veg is OK) He hands back my documentation. “Have a nice day, enjoy your trip.” I am off, in the USA with my RV. I might have missed a question in there, but that is the gist of entering the US currently. There are no COVID questions, I’m assuming the proof of double vax I handed him was all he needed to know.

So I had entered into the State of Idaho, but was only going to be in it for a short period. If you look at a map, you’ll see the northern part of the State that touches Canada is very narrow. As soon as I turned from highway 1 south to highway 2 east, I exited Idaho. My night stop was going to be in Montana, then south hitting Interstate 15 and into Idaho again in the ‘fat’ south part of the State. My first stop is in Montana, in the small town of Troy. I was stopping to get re-supplied in fruit and veg, and while I was at it, whatever else I might need. Stein’s Market was my stop – the town’s main grocery store, and not a huge Walmart. I prefer the smaller grocery stores I can walk through in a few minutes. I also get to see a little of the local character of the town I’m in. Remember when travelling, shop locally, and give the locals a reason to welcome travelers! I scored a great sirloin steak for only US$4.69, it was delicious. 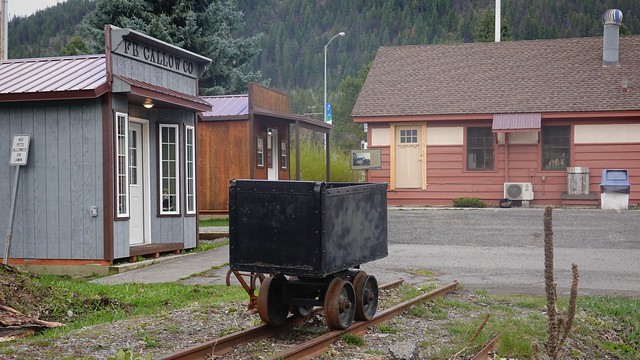 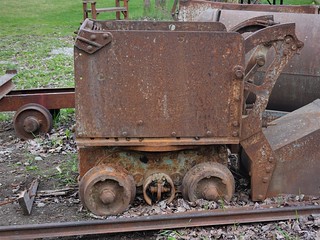 Right next to the grocery store is a little park on the Callahan Creek, with a historic display. It was the perfect spot to park for lunch, just drive across the street and park! There are what I can only call “miniature historic building recreations”, a bunch tiny historic looking buildings. You could put two of these on the back of a standard flat deck trailer, they’re tiny! But the tiny mining carts are the real deal – this is what they hauled the ore out of the mines with, could not be much bigger as the mines themselves could be pretty low roofed in places. It was good for a little walk about. 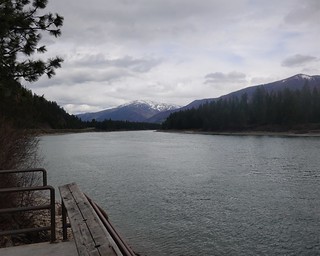 My next stop was a boat launch and rest area on the Clark Fork River. I had been thinking about how high the boondocking spot I had selected was. I could see snow in the mountains around here. Perhaps I should research a bit here where I had good internet signal and see if I could find something a little lower.

My Telus cell phone comes with a US roaming plan that is very simple. You pay $9 for every day you use the phone, and you get to use your plan as if you were still in Canada. If you stay for many days, the charges cap at $120 for the billing cycle. So while I could save some bucks getting a burner phone on an American plan, it was not going to be worth it for this one month trip to New Mexico. My phone sent me a bunch of messages informing me I was now in the US and these charges would apply if I used the phone. Beyond that, I was good to go! This is probably going to be one of the few times I can say I’m happy with Telus on this front at least. 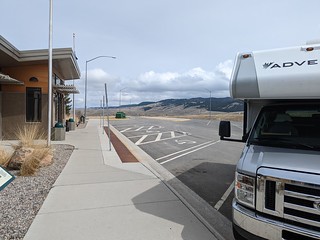 One of the many nice rest stops along the Idaho Interstates

My web surfing in front of the river revealed that there was not much for lower sites past Missoula, which I was only about a 100km away from. But there was something called Copper King Campground that was only a short drive away. I debated checking it out for a few minutes, looking around for alternatives that would take me a little further down the road, but there really wasn’t much. I decided I’d cut my driving day short and go check out the campground, on national forest land with possibly cell signal at the site.

I plug the campground into the googles and let it drive me there.  I am on Montana highway 200, turning off north into a valley just past Thompson Falls. The road I’m on is paved, but shortly after the googles tells me to turn right onto Acm road, which is gravel. I keep driving, not thinking much of it. But as I get close to where the pin is, I start getting concerned. I have crossed the creek here, and the pin is off on the other side! Sure enough, the googles tells me I have arrived at my destination, which is just gravel road. I can’t quite see the creek or across but I’m pretty sure my campground is over there. Sighing, I find a place to turn around and head all the way back down the gravel road, and up the paved road, ignoring the google stern instructions to turn around, and head back where I told you to go. 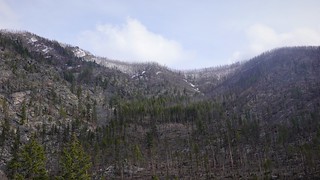 The views around me, some recently burnt

I turn the googles off since it seems to be useless here. It is just constantly trying to get me to make a U-turn of some sort and head back to the wrong road. But navigating on my own, I find the campground no problem on the nice paved road. One problem though, the campground is closed, with the gate in front of it closed! There is another campground not much further up the valley according to my map, I decide to check it out on the off chance it is open. No luck there either. Fortunately, I have been watching for boondocking spots, and did see some promising spots along the Acm road googles took me down. Back I go, down the paved road, but before I get much further I see two little roads turning off into the trees that looks promising. 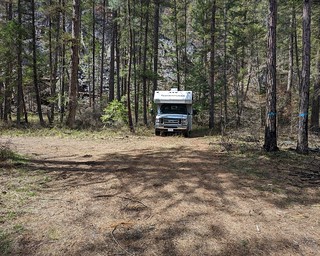 I turn off at the second one and find there is a branch right away. Straight ends right away in a spot I could stay at. Left goes up to a gate. I am in National Forest, there are no signs saying I can’t camp, so I park it. This spot is OK, but a little closer to the road than I’d like. I am certainly visible here. I take a little walk back to the first road going in and follow it in. This road is a little rough but goes back further to a nice spot beside the remains of a building. The only signs indicate where you can cut wood, so the road is primarily access for that. I decide that it is worth it to move the RV and drive over to spot #2. 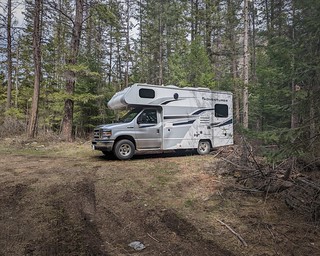 Much better, I think – this spot while harder to get at is not visible from the road and has good internet signal to boot. Or so I think. A bunch of tinkering later, including putting up the booster I conclude that I will not be able to use internet at any spot that only has a Verizon signal. Drat. Verizon is quite common in the Western US, I will miss not having that. So far, I have been able to connect with AT&T and T-Mobile. I just have to read the cell service map in Free Roam and look for those providers. 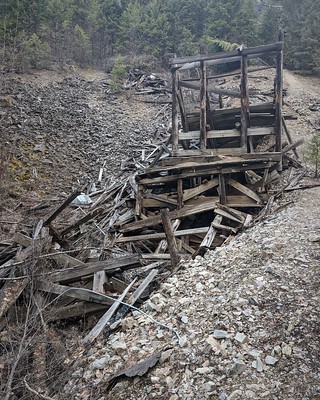 Right above my campsite is an old mining structure. I climbed up above it, to get the picture I started this blog with. The site I’m on was definitely a mining camp of some sort originally, the old building remains are right across from my camp, and other signs of former structures are in the trees. 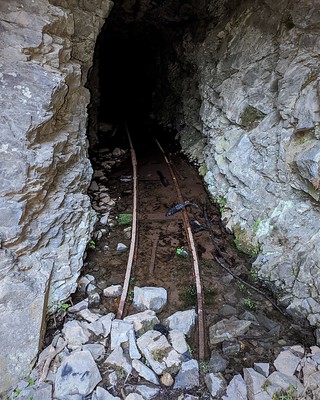 I found out later RR tracks left behind are rare

Where I have climbed,  the mine entrance is just ahead of me. Walking up to it, I see something I have never encountered – the rail tracks are still installed going into the mine! It is that same narrow gauge that the mine carts in the display at Troy would have ran on. If there had been no water in the entrance, I might have dared to go in a little ways, but between that and impending darkness, I contented myself with a picture at the entrance.

But there is not much more to see around here. I make due with my one night and head out the next day. I actually walked back down the road to get cell service so I could see what FreeRoam had for boondocking around Salt Lake City. I’m heading east on the I90, south on the I15 leaving Montana, hello Idaho! My destination is an abandoned state park campground. Join me next time to see what that is like!

Just another blog to share some thoughts with the world.
View all posts by ralph →
This entry was posted in boondocking, RV, RV how to, The system, travel. Bookmark the permalink.