Not so Private Idaho Campground 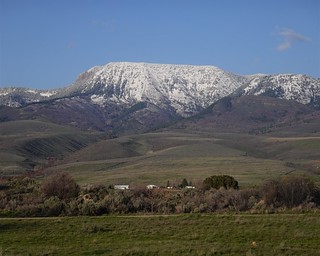 Snow is still chasing after me as I go south

I’ve left Montana and am back in Idaho, not far from Idaho Falls. The highway has been blissfully empty until now, but this area has more people and more traffic on the highway. I see a cop’s lights up ahead, but there is just enough traffic that I can’t pull over to the left lane and keep up my speed. So I slow right down to pass them. I see the cop has a partly restored old Camaro pulled over. I can’t believe what I see next.

Behind the Camaro a black man is kneeling on the ground. The cop has his gun drawn, and passing slowly I can hear him yelling instructions to the black man, who is slowly raising his hands behind his head. I know black people being targeted by police is a thing down here, but I’ve only been in the States for two days, and I see this! My informal poll of American friends tells me it was a bit of a fluke, ‘gun drawn’ pull overs are not that common even with black men. 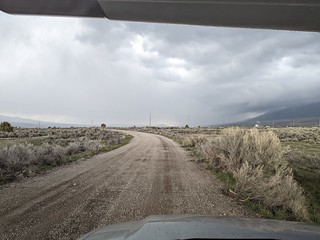 I drive on, never to find out the story of what was going on with that confrontation. Around Pocatello, I hit some pretty intense rain showers. It slowed me down a bit with the traffic, but had a nice bonus of rinsing off all the mud on the RV from the back roads I had been on! My turn to the former campground at McCammon is just past the storm. In fact, the next turn takes me north again towards the storm. But fortunately, only just to the edge of the storm. I quickly pick a site, thinking the rain might come south onto me again. 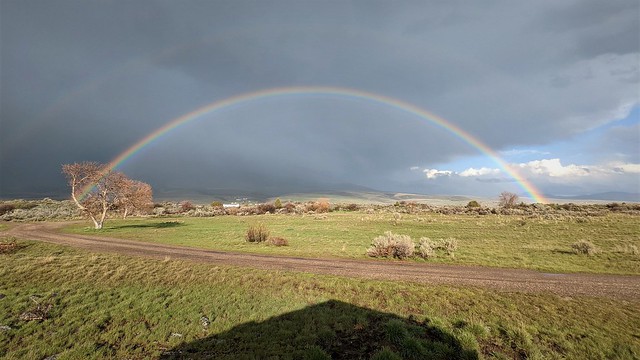 This greets me from my abandoned campground spot

But instead the storm stays just to the north of me, with the sun coming out giving me a massive double rainbow to start my time camping here. Pretty sweet. I do have one other camper in the loop I’m in, just to the right of the rainbow. My spot is out in the open, theirs is tucked in some rocks, with a bit better screening from the noise of the Interstate. You can see the cars and hear the hum competing with the bird sounds around you. Not exactly Private Idaho camping, but I’ve certainly had more noise. Thanks to the site being a former campground, the pads are all nice and level. You can see that many of them are almost grown in – only a few get used regularly enough to keep the vegetation from growing in. 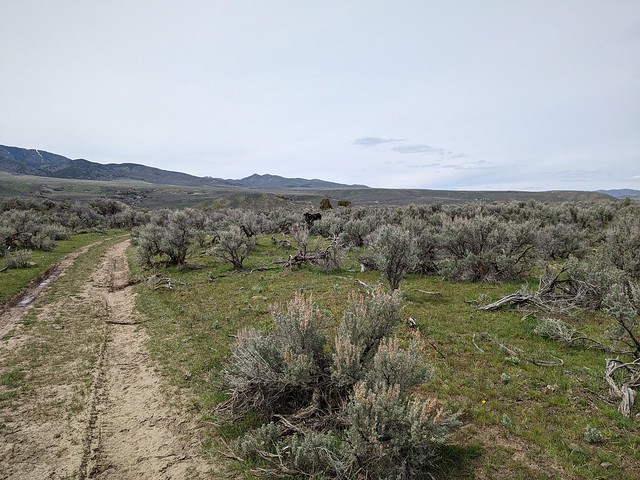 Typical scrubland on the flats around here 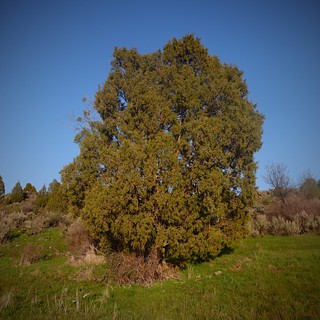 The landscape around me is what I would term scrubby grassland. Being spring, things are green right now, but I’m sure this browns to a crisp by early summer. There are scattered trees about the plains, more on the sheltered slopes and valleys. I’m not used to seeing Junipers as trees – my Alberta ones are all low shrubs, with some ornamental mid-height things people try to baby into growing in Alberta. The Juniper here are full blown trees, 5 metres or more in height for the bigger ones. 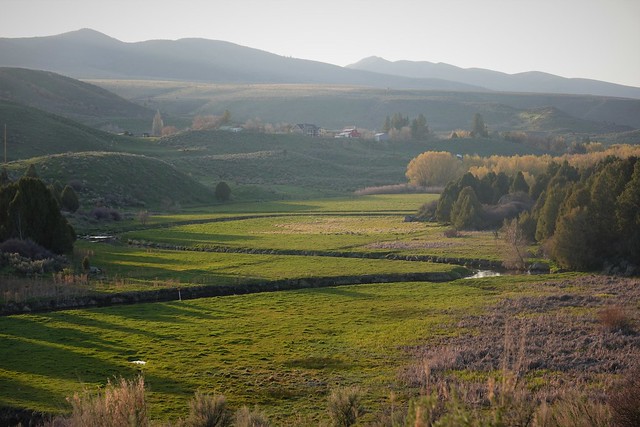 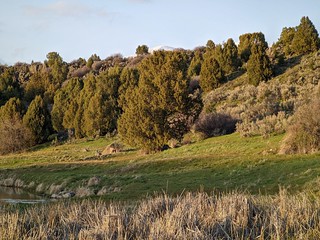 I took a little evening hike on my second day here. I had investigated the maps and saw that the BLM land extended down to Marsh Creek in one area – I could hike over there in under an hour. While the land is not completely open, it is easy enough to walk between the bushes and pick your way down the rock ridges. Getting to the river valley bottom, I am greeted by the sight of a whole forest of Junipers on the slope, with lush grass going down to the river. The many cows in the area have it good here. 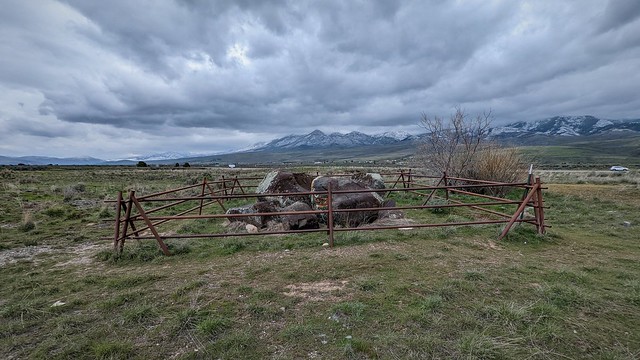 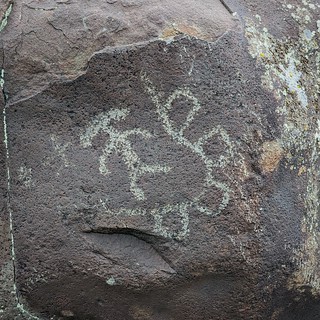 The campground and petroglyph interpretive area was formerly known as “Indian Rocks State Park“, now just reverted to public land. The big attraction here is a set of rocks with a bunch of Petroglyphs on them. There are some display boards down by the parking, and some barriers around the rocks, but that is all that remains. I can see from old aerials that there was once a building here, probably a little interpretive center. The displays tell me that the rocks are not in there original position, having been moved here in this group. That is too bad, as position reveals part of the meaning at times too. But the little display has some pretty good petroglyphs on it for five minutes of walking around a group of rocks, rather than having to go through the country find each one. At least that was the original thinking behind putting these all together. 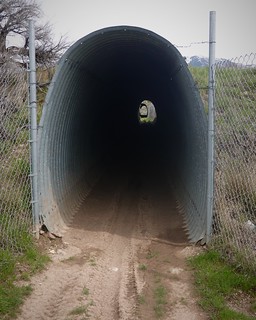 Cow tunnel underneath the Interstate

If you are willing to walk a bit you can go to the edge of McCammon, where the first thing you hit is a Flying J gas station. I step in, thinking I might see if they have a small 12V to 120V inverter. These truck stops cater to truckers primarily, and they have everything in their store that you might use in a truck. So, no problem finding a 130W inverter with two outlets, looking like a little extension cord that ends in a 12V socket. Being in a part of the world with sun again, I actually can suck some power from solar now and use it to charge my laptop with this inverter. So far, the inverter is working well – if I have a sunny day I can charge my laptop and don’t have to take out the generator. I also found a nice cell phone holder that snaps into my cup holder on the RV – they had many different solutions for holding down a cell phone in a vehicle here. The holder is not perfect, it restricts access to some of my heating controls, and it is still a bit wobbly when you poke the phone. But it is better than just having the phone resting in a cup holder. I also checked out the $10 dump station. That would be three stations, each with it’s own gas pump so you can fill up at the same time you dump. It’s a very good setup and I decided it was worth paying $10 for on my way out of the area. 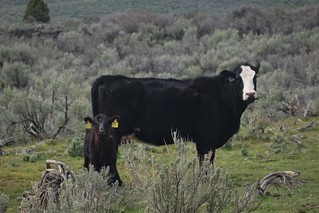 I did have one unexpected adventure following one of my long walks into the scrubland north of the campsite. It was the weekend and several people had been by going down the dirt road I had walked down, some passing through a gate to travel further down the road. A fence keeps the cows out of the camping area, but I was not sure if the cows sometimes could be in there. Someone had left the gate open, but if that was a weekend wanderer or farmer I could not be sure. Coming in, I had seen one cow in the distance, it could come over and cross pass the open gate.  When I returned, the gate was still open.   From my walk, I knew no one was back there anymore. I was pretty sure the gate was supposed to be closed, as from the campground the cows would be able to wander down the road, although at least not onto the Interstate. I closed the gate, thinking my job was done. But as I walk back to the RV, I see a black cow on my side of the fence. This probably was the same cow that was already in the area when I had come through the open gate on my way in. Since I do have some experience herding animals from my work career, I decided I’d attempt to shoo the cow back to the right side of the fence. 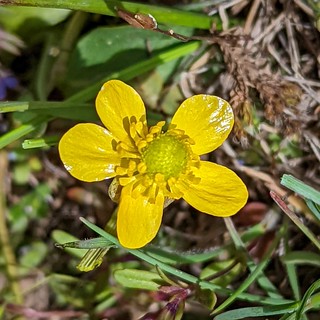 Pixel 6 macro – this is a tiny flower

As I walk towards the gate to open it, the cow precedes me. Had I just left the gate open, the cow would have likely walked through and then I could have closed the gate. But who knew what was going to happen? I can see the cow has a WTF moment with the gate now being closed. I can certainly sympathies with that. I shoo the cow over to the side, and open the gate. Now I need to circle around the cow and ‘convince’ it to go back to its side of the pasture. I don’t deem my chances to be good unless the cow wants to go back.  I can see the way the cow is looking over the fence that there seems to be some longing to return to its herd on the other side, giving me some hope that my corralling might work. 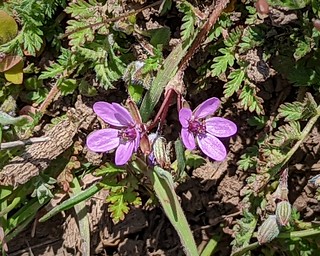 Another tiny set of flowers

My first try to push the cow to the gate seems to be working. I’m going slowly, trying not to panic the cow. But right as the cow gets to the gate it is distracted by fresh grass off to the right, and the cow goes lumbering off away from the gate again. So close! I’m not giving up yet though. I circle around the other way and push the cow towards the gate. This time, I’m more away from the fence, so the cow is walking right to the gate rather than having had to make a left if it wanted to cross the first time. My cow goes through the gate this time, and keeps lumbering away into the distance while I close the gate a second time. Who would have thought my animal herding skills from jobs way past would come in handy in my RV life? I did my good deed and payed in ‘Cowma’ for my walk through the pasture.

With my cattle herding good deed done, it was time to leave the abandoned campground. I had planned on one perhaps two nights, but stayed for four nights with the area being so pretty and having many places to walk to. One last less pleasant thing, I did pick up a big black and red tick walking through the brush, so they are around down there among the cows and brush this time of year. I had been hoping they would hold off as the snow is not long gone from there, but no, it is tick season as soon as it warms up just a bit. I’m heading south to Utah Lake next, see you there!

Just another blog to share some thoughts with the world.
View all posts by ralph →
This entry was posted in boondocking, campground, pictures, review, RV, RV how to, travel. Bookmark the permalink.

1 Response to Not so Private Idaho Campground