Adapt to the situation 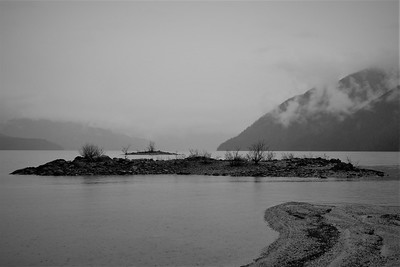 Islands just off of Wragge Beach

My aborted trip to Wragge Beach Campground on Slocan Lake had me waking up somewhat unlevel camped partway to the site. But my sleep had been fine, it seemed being slightly tilted head down did not affect me as much as I’d thought. I could hack this for one more night – that would give me a chance to hike into Wragge Beach Campground over the snow and see what I was missing.

I figured I would get an internet signal at the lake according to the Telus map, I could plan my next move there before returning to the RV which had no internet at my unexpected boondocking spot. 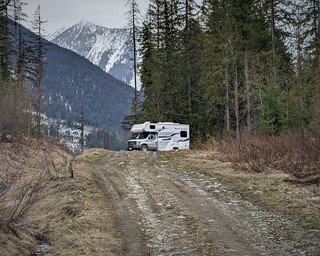 Hiking down to the main forestry road to start my trip to Wragge Beach, I could see my rig was not quite as hidden from the main road as I thought. No biggie, I was only going to be there for one more night and the main road did not get much traffic anyways. Driving up that hill certainly seemed a longer distance at the time! 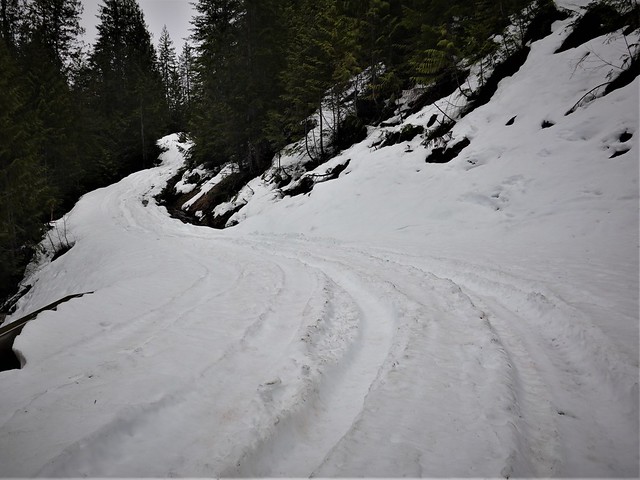 Snow is still about half a metre deep

I pass the point where I had turned around my RV and proceed down into the gully. The snow going down is deep but the ruts make it passible by my RV. Looking up the other side again, I can confirm there is no way my rig would have made it up, in fact I’d say only a 4X4 with high clearance had a decent chance of making it at this point. It was definitely going to take a bit of snow melt before I was going this way, I was not going to wait around for that to happen. My hike would be it for visiting Wragge Beach – I would find something with no snow hopefully for a longer stay. 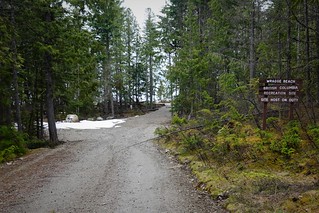 My hike down the road only has occasional views of Slocan Lake, nothing particularly photo worthy. It is a 7.5km hike according to the signs pointing me to the lake, so it takes up most of what has turned into a raining afternoon. So much for the forecast of scattered showers. 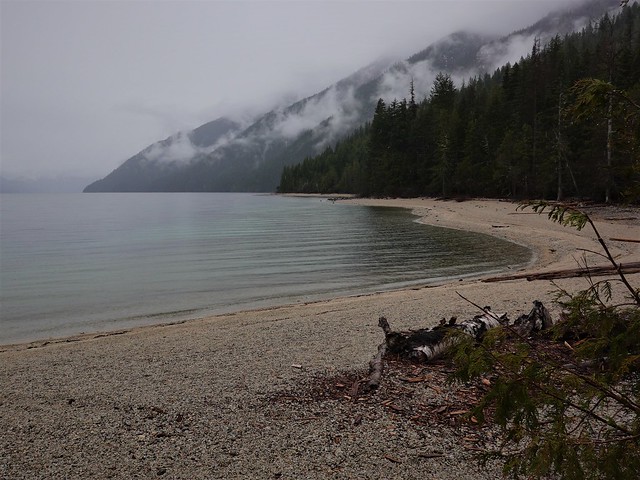 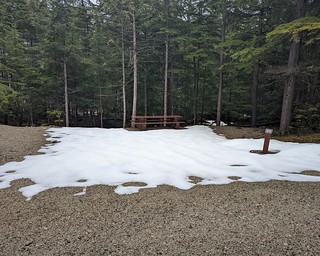 I manage to find a tree to perch under that keeps the rain off me once I arrive at the campground. It is a nice gravel beach, with nice campsites. I really would have liked it here. But even down at the lake, snow remains in some of the sites. I could see the 4X4 that had been in here had camped at a primo spot close to the lake, and had gone down and put tracks on the beach. This is why fences and bans go up people. 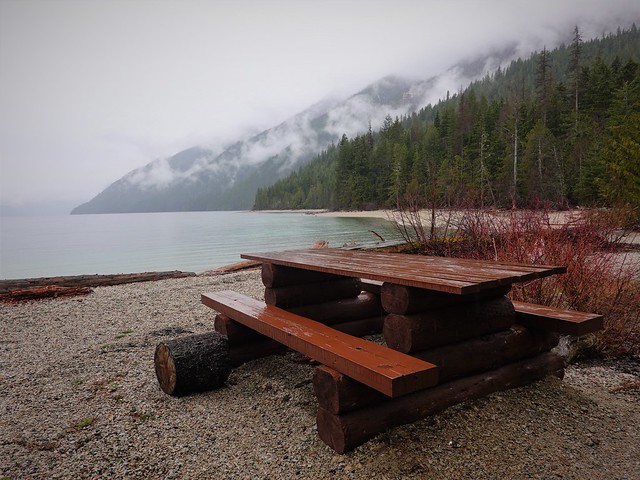 Day use spot on the beach

Even in the dull day I find some beauty in the little islands just off the beach. You can wade out to the first island, the water is shallow enough. This would be great for swimming in the summer. A little fishing could be good here too. But I content myself with the view under my tree for the most part – the rain let off just long enough to make my exploration of the campsite not too wet. I did indeed have a cell signal at the campground – a little hill between here and my campsite was blocking the signal I could see now. I used my online time to plan my next stop. There was a recreation site a half hour to the north of me called Box Lake. But I wasn’t sure there would be no snow there either so my backup plan was to head back to Garland Bay on Kootenay Lake if nothing better popped up around here. That would be snow free for sure this time of year. 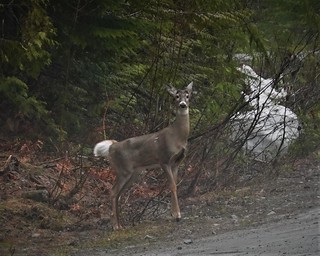 My walk back was mostly uneventful, other than a couple of Whitetail Deer I encountered on the road. A whistle on my part got their attention at the point I had snuck up not too close. I thought they might pause for a second to look before running off. This doe did take a good look at me before running off with her friend. Not a bad shot for a point and shoot in dull rainy conditions. 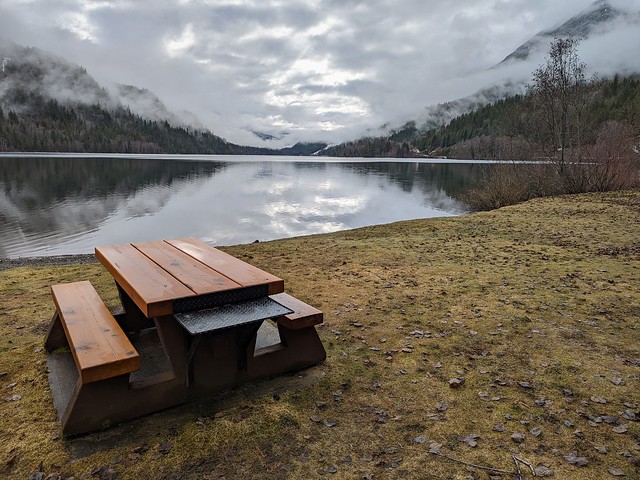 Summit Lake. Ice is in the distance on the water 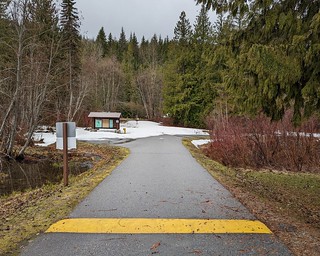 The next day I packed up and headed for the Box Lake Recreation Site. The highway goes over a pass with Summit Lake in it. While the picture looks like there are ripples in the water in the distance, that is actually ice. The lake was only half open at this point. There is a Provincial Campground here too, which is where I stopped at the rest stop/day use area adjacent to the park. The park is not open yet. Not that I would have stayed there, $26 per day for dry camping is too much, even if it is a very nice park with water available. The gate and a good pile of snow were making sure to keep everyone out of the park in the off season. 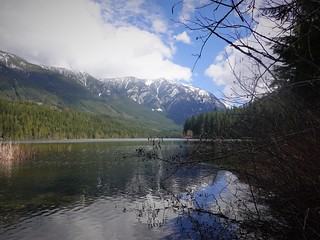 Box Lake from the west end

Box Lake is only a few kilometers down the road – I’m hoping the snow situation changes quickly before I get there. I turn off at the sign marking the road to the site. There is no snow here, a good sign. The road goes down to the lake, so no going into potentially snowy hills. I start seeing lake through the trees and arrive at the site. There is only a little bit of snow left from plowing in here. What a difference a few kilometers make, it is not that I have dropped much in elevation. 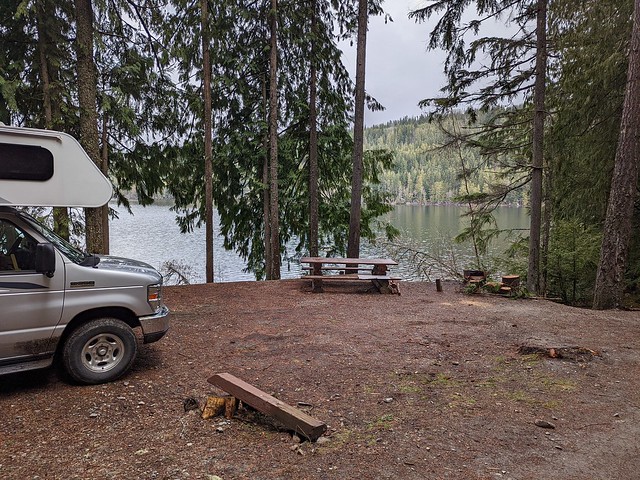 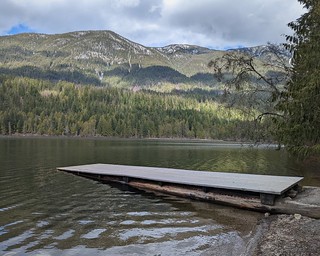 Boat launch is right by dock, smaller boats only

Box Lake recreation site is fairly small, around ten sites stretched out along the lake. The boat dock is a nice bonus, I’m already thinking about fishing off it. Many of the sites really will only fit smaller rigs, and not that level at that. But I have the whole campground to myself so I pick my favorite spot, #2 which is the first site in on the left. It is a little more sunny, although nothing here gets that much sun. My solitude lasts all of an hour before someone comes in and takes the site at the far end of the campground. That is a good shady spot which perhaps I should have claimed for myself as there was a lot more traffic coming into the site than I expected. The dock and boat launch were well used while I was there, four boats were out on the water during the weekend. I shudder to think what this place would be like on the July long weekend. 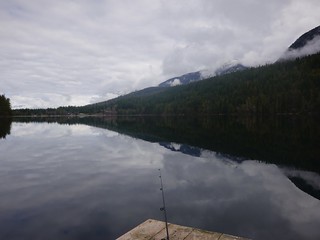 Some fishing from the Dock. Caught two, but people in boats were doing way better

I stayed at Box Lake for a few days. It took all of a couple of fish jumping to convince me I needed to get my new BC fishing license so I could try my luck here. While the weekend fishing was good, I was having no luck trying anything. But finally on Monday, I manage to catch a little guy on a small green and white spoon. Then I get a good pan fry fish with a Kamlooper. I decided dinner would remain chicken drumsticks and returned my fish to the water. At least I’d caught a couple finally – some people in boats were getting constant action fishing. I will be getting that folding kayak, that will up my fishing game! 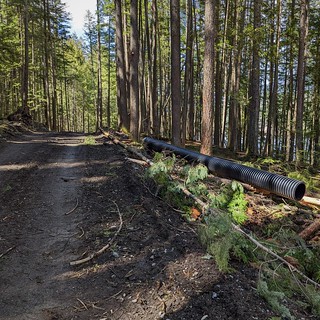 There was a bit of hiking on old logging roads in the area. The road going into the rec site continued on, turning into something that looked recently constructed. I could see the area had been selectively logged, but the road didn’t make sense. 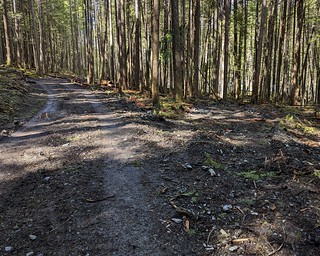 To the right, that will be a camping spot off the road, which continues down to a loop

The road first split into an upper section and a lower section, coming together again then splitting. This is not required for logging, the roads were close together. Then I see this little offshoots that have been bulldozed in some spots and it all makes sense. The campground is being expanded to something three times its original size. Considering what camping demand has been like, I’m sure this will fill up on every summer weekend at the very least. The fees, by the way, start at the beginning of May and are a much more reasonable $12 per night. 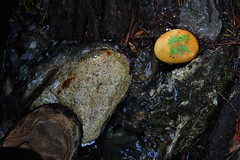 Rock in a stream I was crossing. Gone after the ATVs had been by 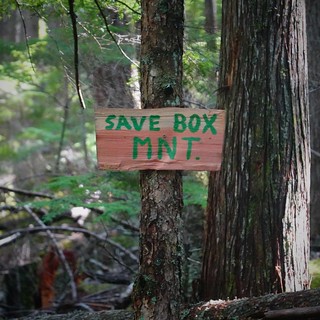 Off to the side of the road a ways, you had to be looking for it 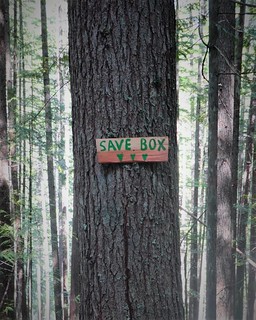 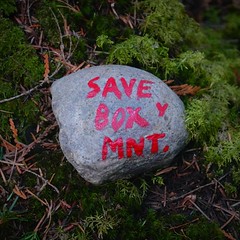 It is surprising how many peculiarities you find in the woods. I saw a “Save Box” sign first, then noticed the rock in the stream I crossed, then the next sign. By this time I was watching the woods, looking for the next “Save Box” marker. What was this campaign in the woods talking about? I finally got around to googling ‘Save Box Mountain’ and found this. It turns out there was a campaign to save Box Mountain from logging, it’s possibly old growth (to be confirmed) and I’d assume some of the locals would rather the trees stick around. While a sign and rock campaign in the woods probably isn’t the most effective in terms of getting people’s attention it was a nice hunt and seek for me while I was walking around. The ATV drivers that went through certainly didn’t help the campaign – the rock in the stream was gone when I came back the next day, along with some big ruts left in the road where they pulled a tree off of it. Taking the tree is good, but take a couple of minutes and level your mess. I could only do so much with my shoes. 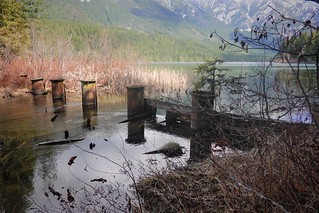 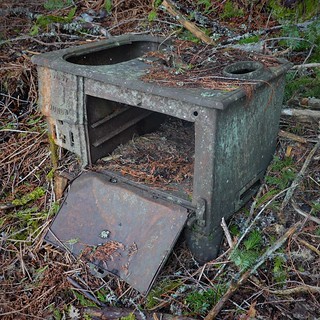 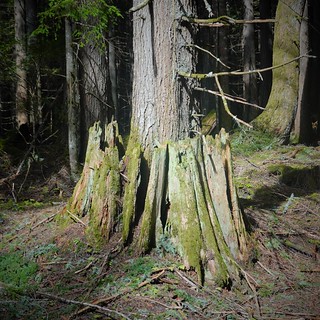 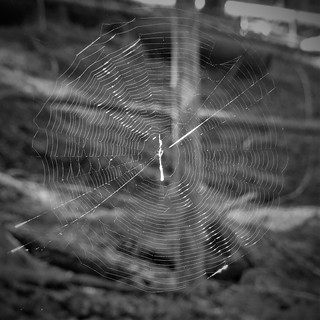 There were other things in the woods too, natural and not so natural. But overall, not a lot of roads to hike down from the campground. I decided after the quiet Monday following a busy(ish) weekend at Box Lake that it was time for me to head south. I had planned my next hop south near Creston and then onto the United States of America! I enjoyed one of the first warm nights of the spring outside, getting in a last bit of fishing before I headed out the next day. I leave you with one last sunset picture from my campsite as the sky fades to black. See you next time as I head south. 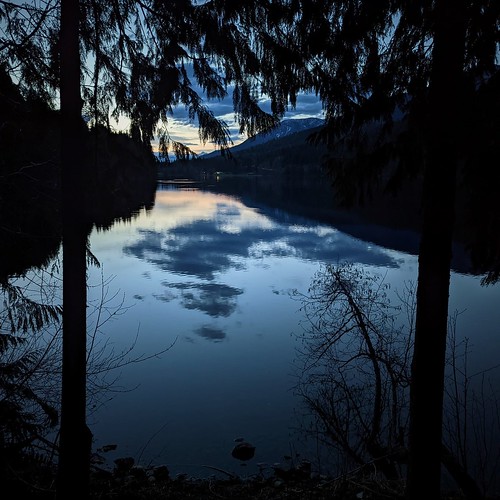 Just another blog to share some thoughts with the world.
View all posts by ralph →
This entry was posted in campground, fishing, pictures, travel, WhoKnows?. Bookmark the permalink.