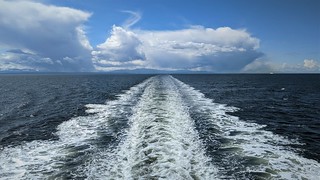 I am really coming to dislike the actual process of getting to or from Vancouver Island. While I even managed to leave a little early, and get to the ferry an hour before its departure, I still managed a second time not get on that ferry. Now, I had considered this a possibility so getting the 1pm rather than the 10:40am ferry was not a disaster. I could still make it to Keremeos by about 7pm, a little later than I’d like, but I’d take it. 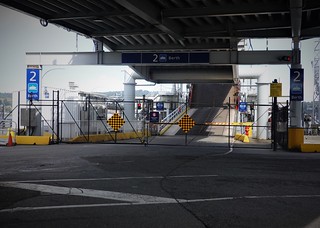 Riding the ferry during the day this time was a treat. It was a nice day to start with but rain was starting to pop up here and there. I had lots of time to explore the ferry terminal and surroundings, plus make lunch. There was no pub on this side of the ferry crossing to tempt me this time. 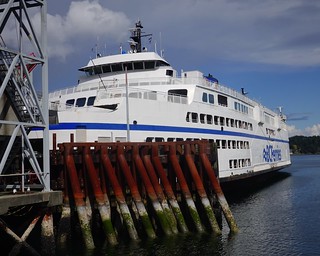 There was another ferry, just sitting there in berth 1. It could have been loading cars and probably would have been full too thanks to induced demand, but no – I sit there waiting for my ferry looking at another ferry just sitting there. To be fair, I doubt BC ferries could staff another boat at this time, they already are cancelling sailings due to lack of staff. Think of that, a reliable job on the ferry where you can go home every night and they can’t get enough staff! But five percent unemployment in Canada will cause that kind of thing, as well as adding to inflation pressure. 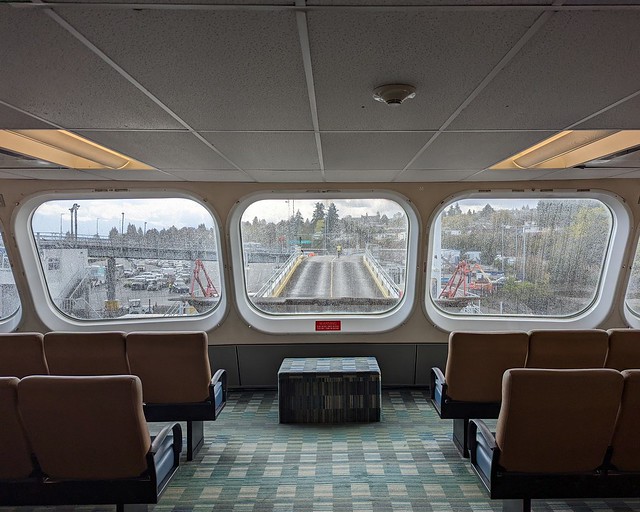 The weather on the water was nice for the ride, but I could see some rain over Vancouver, looking pretty thick from those clouds. In the meanwhile, I enjoyed the ride across. The weather was still quite cool for the time of year – I only took a quick tour outside then contented myself with an inside window view of the ride. 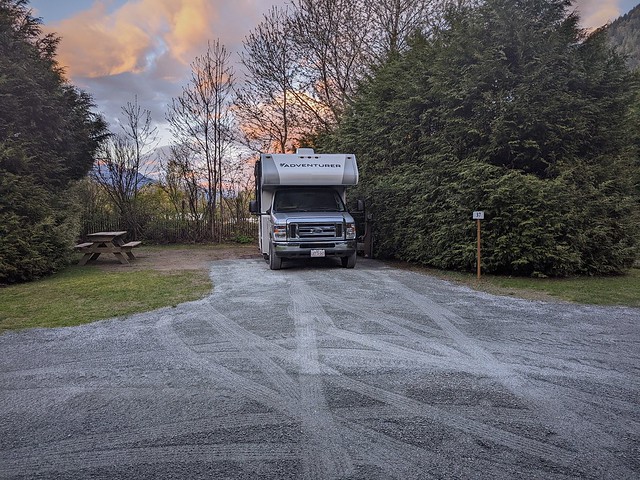 Nice site, but a low on the passenger side. 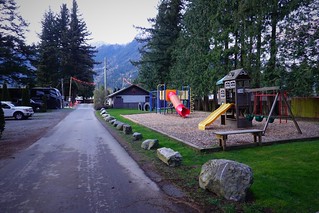 While I had counted on a possible one ferry wait, I had not counted on the horrendous traffic on the highway. The rain had been quite severe, I could see sleet on the side of the road. Sleet, in Vancouver, in April! I expected some slowdown around Vancouver of which I got plenty, probably in part due to the storm that had just past. I also got slow downs in Surry, Abbotsford, and Chilliwack. Now I’m running at about 8pm before I can settle in – just a bit too late for dinner. So I cut my journey for that day short at Hope, staying at the Wild Rose Campground & RV Park. It is a nice campground, everything is neat and clean. The $44 a night I paid also includes use of the showers, which I ignored as I planned to empty my water tank and fill my grey tank with a shower in the RV. But I did inspect the facilities – they are older, but kept in top notch condition. 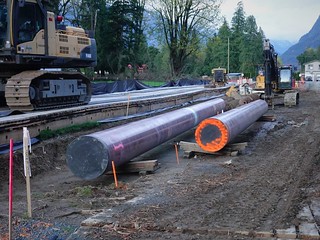 The campground is right in the middle of every mode of transportation in the corridor, and I mean everything. Rail, highway, river, road, and pipeline. That’s right, pipeline, as in the Trans-Mountain Pipeline expansion is being built right through the middle of the campground while I was there. I might have been able to get a cheaper site at this place, but those sites are all dug up by the pipeline construction right now. The site borders on the highway, so there is some noise, but the site is long and thin – stretching between an access road and the highway. If you are a little further away, the highway noise fades to some extent. The railway can be heard, but again at some distance so it is not too bad. But quiet solitude you will not get at this campground. There is shrub screening between some of the sites, of which I had both sides covered, so it was more private at least. 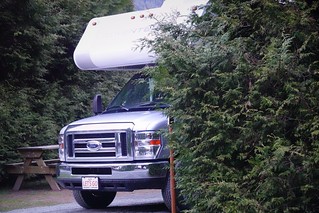 Nice screening at my site

New gravel had been laid down on my site, and it looked like they were in progress of doing the whole site. Unfortunately, the site was not that level – I’ve done better on my own boondocking. While I lived the night without levelers, I dragged them out to dump my tanks as I was tilted away from the drain on my rig. Perhaps they will go level the site better once they are done with the new gravel everywhere – it wouldn’t take much to fix. Overall, I rate this as another solid place to stay for a night or two – too much noise in the area for me to want to stay there long term. 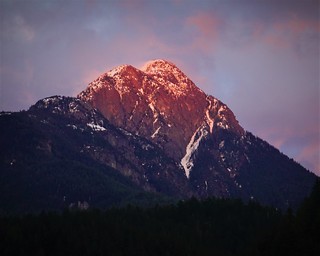 I departed the campground at a reasonable time, as in I slept until I was done sleeping and even with dumping my tanks and filling water managed to get out just after 9am. I was heading for Slocan Lake, to the Wragge Beach recreation site. It is on the water, with cell service according to the Telus map, so it looked like a good place to sit for a week and start planning my travels south. The weather was nice today – perfect for driving, other than the wind that picked up a bit as I went through the Okanagan region. I was hustling today – it was a longer drive today now thanks to cutting my drive short yesterday. But I did make one pitstop before my lunch stop, to find myself looking at my RV pulling up behind me. 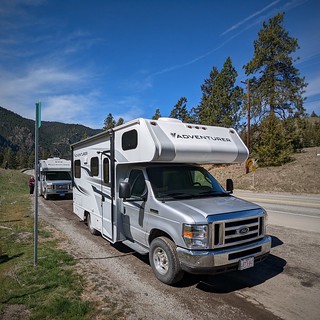 I’m normally not one to go talking to people, but I just had to chat up the owner of this unit, a 2020 version that would be almost identical to my 2019. It turns out that this older couple had just been out on their first trip in their new to them rig. The rigs are still are hard to get, they only just happened to see one pop up and immediately jumped on it rather than settling for the larger 24 foot unit that was their second choice. They were a retired couple – didn’t need anything bigger and this was good for them and their medium sized dog. While I have seen a few of my model of rigs going down the road, this was the first time I actually could chat with someone else who was part of the mini-Class C club. That’s a club I just made up, and if your Class C RV is less than 24 foot long you’re in it.

Being a long driving day, with a stop for groceries in Keremeos I did not play tourist and take pictures. I knew I was going to be arriving at Wragge Beach fairly late in the day so I did not have time for any site seeing. My drive up Slocan Lake was nice, with the highway mostly staying up high and giving occasional views of the lake below. But as I proceeded north of New Denver, the snow began get thicker on the mountain tops, getting lower to valley as I proceeded to the end of the lake. But we are talking late April here, surely there is no snow down by the lake anymore, I thought.

I turned off the highway just past the north end of Slocan Lake, crossing a little rural farming area. I can’t believe it, but I’m seeing snow down here at the valley bottom, along the side of the road. Heading up the other side, the road turns to gravel as I enter a Forestry Service Road, starting to climb up as I head south toward Wragge. I was seeing lots of snow on the side of the road, but it had also been plowed. Making my first turn toward Wragge, the plowing stops. Now I was looking at parts of the road where only one track had melted down to the gravel, with the snow getting deeper. But I was not climbing anymore, perhaps this would be the worst, I thought. The road ahead goes down into a gully, with what looks to be a creek on the bottom. I’m seeing signs that people turned around here. I stop and decide to walk down to the bridge at the bottom of the gully. I can see that this is the shadiest area, with probably the most snow remaining. I had better check out the road before going down and not being able to come back. 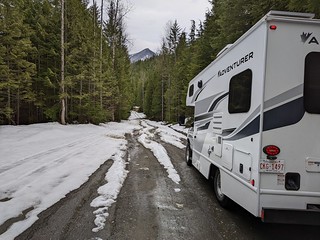 I turned around here, while I still could

Sure enough, there is a lot more snow, in fact no melted track at all. I can see from the tracks that even the 4×4 that went in here struggled along this stretch, slithering back and forth with his track. At the bridge I see the other side is even worse. It was obvious that I am not driving to Wragge today. I walked back to my RV, turned around in the last clear patch before the snow got deep, and made my way back down the worst of the tracked snow I had been through before contemplating my next move. It is already after 6pm – I don’t really have much time to explore. There is no internet where I am parked, so I can’t even research my alternatives at this point. I start back down the forestry road thinking I’ll stop somewhere once I have internet again and figure out my next move. But I kept an eye out for possible places to stay for the night on the way back – I knew I was on crown land here. 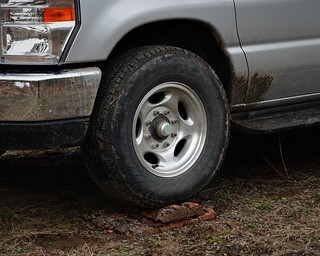 Biodegradable levelers, could have used one more

I come back to the one branch road I had seen coming in that was still on crown land. It was a steep uphill, but I might as well give it a try and see if anything is up there, hopefully not snow right away. I slowly made my way up, seeing one marginal spot along the way. It doesn’t look great, just big enough off the side of the road and not very level. I continue up a short distance and sure enough, snow again. Another quick walk on my part confirmed nothing better up to where the snow got too deep. I back the RV up to the marginal spot. A quick critical look decides it for me – I’m going to try this spot out. There is no cell service, but if I park my rig just so I can just be off the road and perhaps level. I spent a bunch of time positioning myself and propping up the downhill side of the rig. The only good thing was that there was lots of flat wood around to use as levelers. I got sort of level and decided it would be good enough for the night at least. 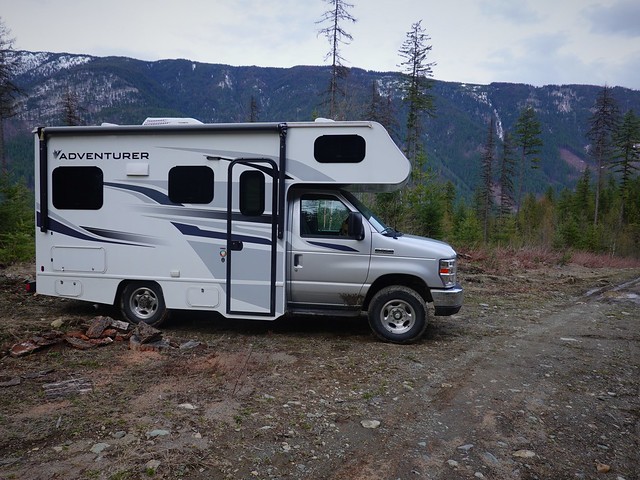 Just off the road, any bigger rig would not have fit

Even though my spot was just off the road, it would be OK. I could see from the road tracks that the only thing that had been up here recently was a mountain bike, and even that turned around where the serious snow started. No one was going to come driving by me, and on the off chance there was still enough room to get by. I cooked up a late dinner in my not so level rig, and hit the bed, with my head downhill. Fortunately, it was not bad enough to bug me sleeping, I could hack an extra day here and perhaps at least walk in to Wragge. But you’ll have to tune in next time to see what I did!

Just another blog to share some thoughts with the world.
View all posts by ralph →
This entry was posted in boondocking, campground, fishing, hike, pictures, review, RV, travel. Bookmark the permalink.

1 Response to I found snow, again